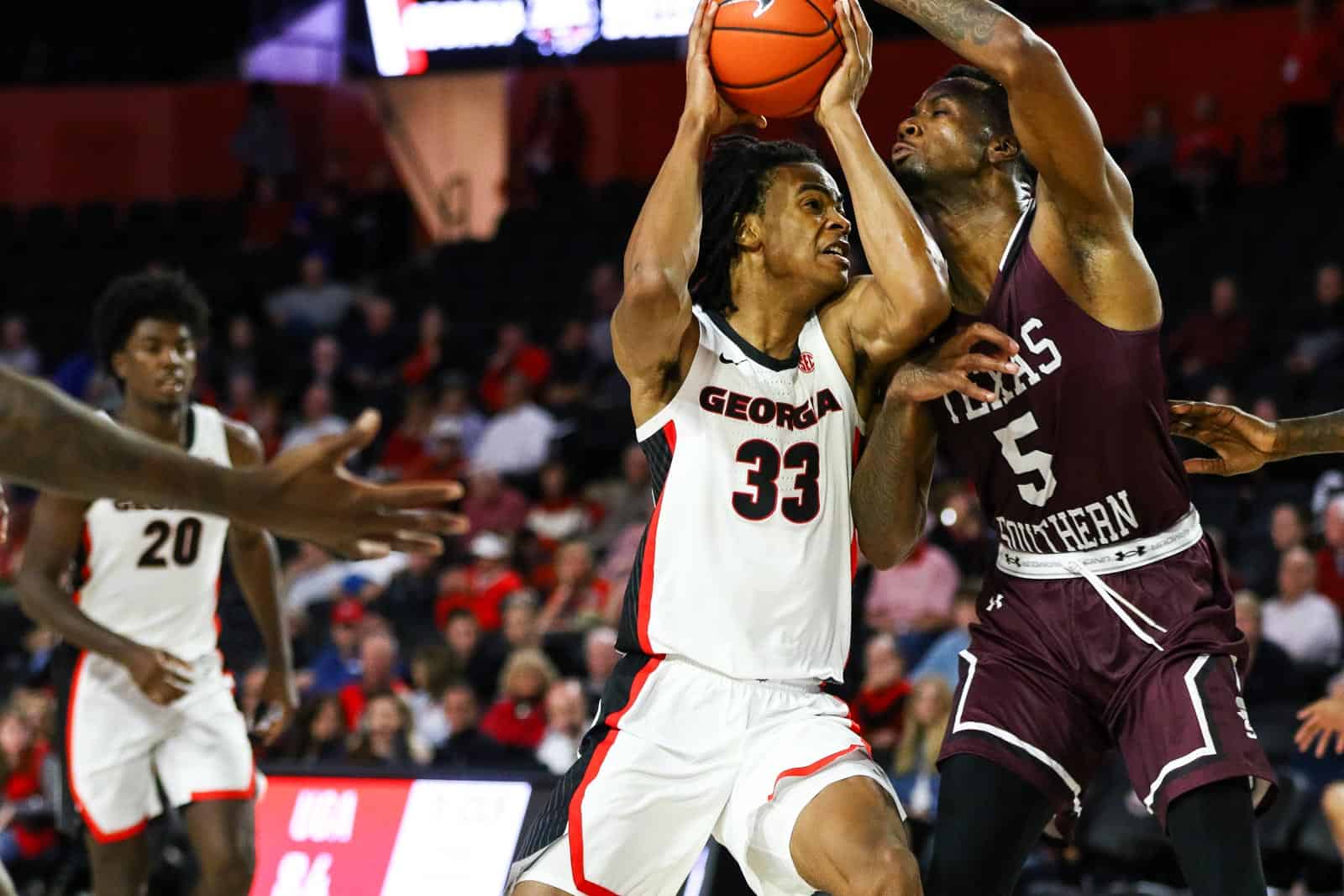 “I thought [Tyree] Crump did a good job,” said Georgia head coach Tom Crean. “I thought he played through fatigue and did some good things. He got open shots, we moved the ball well. We had 18 assists, 32 made field goals, 11 threes, that’s good. There were some really good things.”

Junior guard Tyree Crump totaled two career-highs with 25 points and five 3-pointers, guiding the Bulldogs to 11 overall from behind the arc, which matched the most by the team this season. Senior Derek Ogbeide had his second double-double of the season, scoring 13 points and grabbing 10 rebounds. With 10 boards, he matched Marcus Thornton at No. 14 (664) on Georgia’s all-time rebound list.

The two teams traded buckets back-and-forth, until five different Bulldogs (5-3) fueled two separate seven-point runs. A three from Hightower gave Georgia its largest double-digit lead of the half, 17, over the Tigers (3-6). With 7:10 remaining in the half, a 3-pointer from Claxton started a 9-0 streak for the Bulldogs. Crump tipped in the ball with less than 30 seconds remaining to notch the 52-35 total going into the half.

For the second time this season, Georgia eclipsed the 50-point mark in the first half.

Within the first 15 seconds of the second half, Hammonds’ layup established a 54-35 lead. Crump’s fourth 3-pointer of the night at 10:55 gave Georgia its first 20-plus point lead, 21, of the game. A tip-in from freshman Jojo Toppin marked the largest advantage, 25, of the game at the 8:13 mark.

Texas Southern attempted to chip away at the Bulldog lead but was unable to push the margin below 12. A pair of free throws from Hammonds in the last minute solidified the Georgia 92-74 victory, keeping the Bulldogs’ home slate clean.

Georgia notched a season-high mark from behind the arc at 50 percent. The Bulldogs also registered 36 points in the paint. This marks the third time this season that Georgia has checked in with at least 50 rebounds as a team.

The Bulldogs return to Stegeman on Dec. 15 against the Arizona State Sun Devils at 6 p.m. on the SEC Network.

• Georgia is now 10-0 against current teams in Southwestern Athletic Conference and 1-0 all-time vs. TSU.

• Texas Southern is the fifth school Georgia has played this season that reached a 2018 postseason. The Bulldogs are currently 2-3 in those games.

• For the second time this season, Georgia eclipsed the 50-point mark in the first half (59 vs. SSU). Three Bulldogs already had double digit scoring marks (Claxton-11, Ogbeide-10, Crump-10).

• Nicolas Claxton had three of the team’s six blocks. In half the games this season, he has at least three blocks. Last season, he finished with that same number (4) of three-block games.

• UGA grabbed 50 rebounds for its third 50+ board game of the season – a feat done just once last season. Entering the contest, UGA’s rebound margin was +7.6. Tonight it was a +15 differential at 50-35. Claxton, who leads the SEC in rebounds with 9.0 a game, grabbed exactly nine.

• Georgia outpaced its opponent in points in the paint (36-28) for the sixth time this season.

“I have a lot of respect for [Texas Southern head coach] Johnny [Jones]. I have a lot of respect for the players on the other team with how many of them are from Georgia like number 5 and number 3. They came in with that attitude that they want to prove a point. They play at the highest level, a lot of respect like I said, and you have to respect them when they beat Baylor at Baylor and beat Oregon at Oregon. Those aren’t easy places to go. It was a good win. It was a learning win. There were some really good performances. There were some really poor performances. It’s a win that we’ll take, but it’s a win we have to build on in a short period of time before Arizona State comes in here next Saturday.”

There were some really good things. I thought Nic Claxton did some really good things. Certainly Derek, and Rayshaun came back after the fouls. Teshaun did some good things. We’re looking for more. I coach these guys where I think they could be, not necessarily where they’re at. That’s the only way we’re going to get it. The Caymans taught us a lot. The Caymans taught us that we can’t be this patient. We have to have more urgency all the time, and I think Tyree Crump has tried to respond to that.”

On his shooting tonight…

“I kind of know what kind of game I am having during shooting around. I felt good today when I was taking shots. I knew it would carry over to the game.”

On confidence this year now playing in Coach Crean’s system…

“Yes. I was in the gym a lot this summer, just working on shooting, working on my game. I feel like that kind of carried over to the season. Also, Coach Crean getting my form right.”

“Yeah, we played well, we played silent the first half. We were composed, aggressive, smart with it too and were open and made plays. We played a really good half, as the way the game went.”

On how Coach’s energy gets them going…

“It’s the kind of energy that’s directed in a way that leads to improvement.  When he says what he’s saying, you know with his tone, with his actions, you still gotta remember to take the information out of what he’s saying in his enthusiastic way– it’s so enthusiastic— you have to pay attention to it.  Once you pay attention to it, you do the necessary things. About 9 times out of 10, he’s not wrong. I’ll give him 10.”

On Crean wanting them to play scrappy…

“Oh no, he wants us to play hard.  We’re trying to really to establish an identify of how hard we play, how hard we wanna play.  As the name says, we are dawgs. We are bulldogs. WE want that to carry over, to paint over, and to be us and to play with an intelligent aggression and just real scrappy.  It’s a certain kind of mindset that really has to be developed, trained, worked on, and that’s what we’re in the process of doing.”