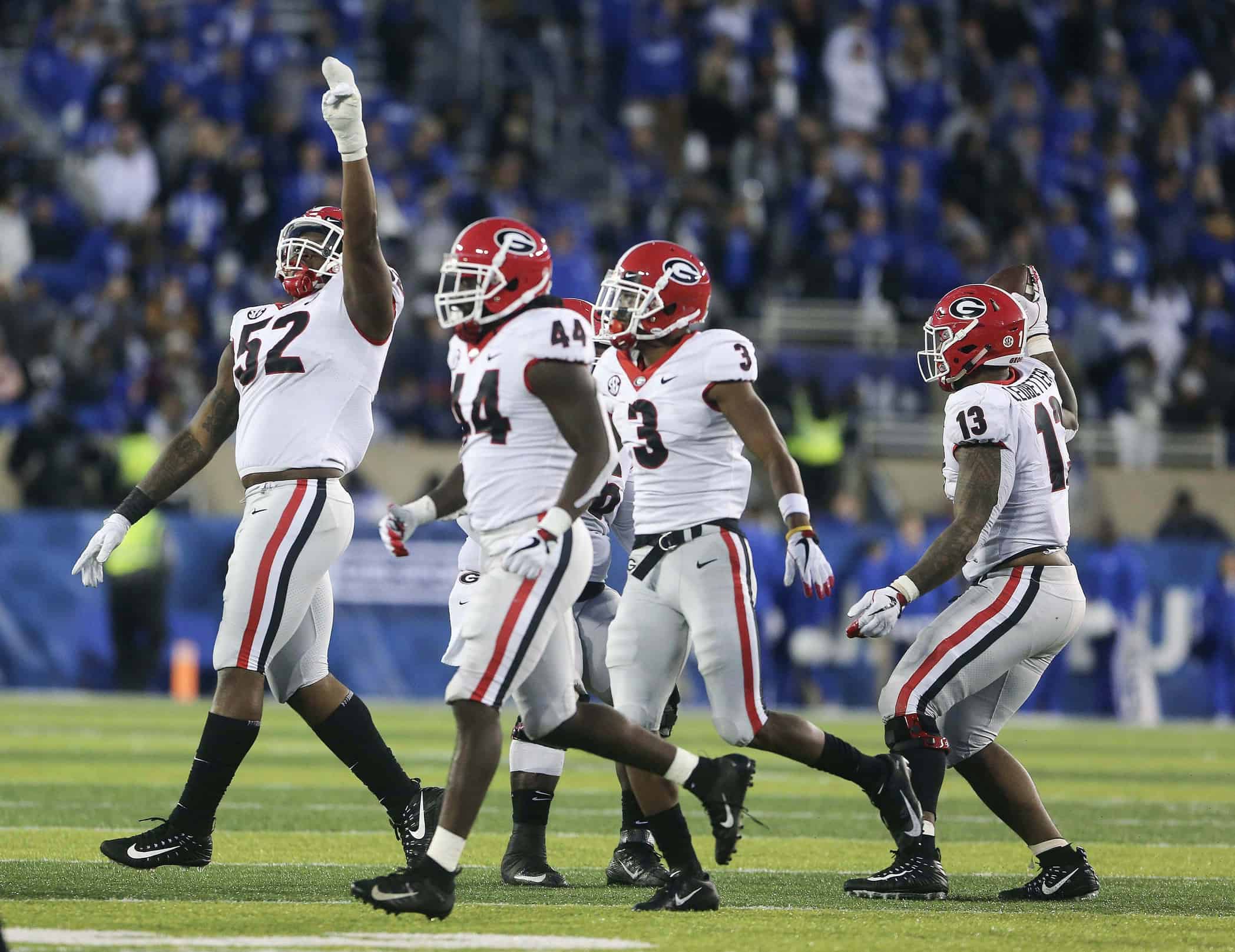 LEXINGTON, Ky. – For the second year in a row, Georgia captured the Southeastern Conference East Division Championship after the No. 6 Bulldogs defeated the No. 11 Kentucky Wildcats, 34-17, Saturday afternoon at Kroger Field.

The Bulldogs (8-1, 6-1 SEC) remain undefeated against SEC East foes for the second straight season en route to collecting their ninth SEC East Title. The SEC Championship is set for Saturday, Dec. 1 at 4 p.m. at the Mercedes-Benz Stadium in Atlanta, Ga. The SEC West Division Champion will be determined Saturday night in the matchup between the LSU Tigers and the Alabama Crimson Tide.

Entering Saturday, Kentucky (7-2, 5-2) represented the nation’s top defense yielding just 13 points per game and SEC’s third-toughest run defense giving up just 107.5 yards per game, while also averaging 214 rushing yards of their own. Georgia flipped the script by tallying the most points on the Wildcats this season, accumulating a season-high 331 yards on the ground, and limiting UK to 84 yards on the ground.

“Good backs, good recruiting, and toughness,” is what Georgia head coach Kirby Smart attributed to the game. “Our kids are tough, resilient, and they fight. I want to give a lot of credit to Mark Stoops and his team, they have a bunch of seniors and they played really hard. Our guys played extremely physical today and answered the bell.”

Leading the Bulldogs’ ground attack, sophomore running back D’Andre Swift finished with a career-high 156 rushing yards on 16 carries and two touchdowns. The Philadelphia native added 18 receiving yards for a total of 174 all-purpose yards, 99 of which came in the second half. Also having a career day was junior Elijah Holyfield with a personal best 115 yards on 18 carries and a touchdown.

In the passing game, sophomore quarterback Jake Fromm went 14-of-20 for 113 yards and a touchdown. Fromm’s top target in the afternoon was sophomore Jeremiah Holloman with four catches for 39 yards. True freshman quarterback Justin Fields tacked on four rushing first downs none more important than a fourth quarter pick up that enabled Georgia to continue to run clock with less than six minutes to play.

“This year’s team has had to answer a lot of questions,” Smart added. “They’ve had to battle and it hasn’t come easy. We didn’t make it easy today – it never comes easy. I want to give a lot of credit to those two quarterbacks (Fromm and Fields) on our team. Justin Fields comes into the game and makes some huge plays for our team. He continues to get better, he just had one of his best weeks of practice and he did that without even playing in the game last week. Jake played well out there as well.”

Georgia led 14-3 at the half with the defense and special teams setting a strong early tone for the Bulldogs. A quick four plays on the game’s opening possession forced Kentucky to punt, which junior Mecole Hardman returned 65 yards to the 25-yard line. The offense did its job by cashing in on the short field with a touchdown, a 4-yard pass from Fromm to junior tight end Isaac Nauta. The score represented the only first quarter points.

Kentucky’s fourth drive of the game started in the first quarter and spilled into the second, but the Georgia defense stalled it in the red zone, prompting a 34-yard field goal. Georgia matched UK’s 15-play scoring drive with a 14-play scoring drive that ended in a 20-yard TD scamper by Swift to put it at the halftime score. The run came on 2nd-and-17 and featured two separate cuts by Swift that sent three total Wildcats flying by and then another two hanging onto Swift as he entered the end zone. Within the drive, Georgia faced two third downs – one picked up by Swift on an 8-yard half back draw and another on a 4-yard catch from Holloman.

Coming out in the second half, Georgia made up for its red zone turnover at the end of the first half by taking the opening possession down the field for a touchdown and a 21-3 lead. The drive lasted nine plays and spanned 78 yards, ending with a gritty 4-yard touchdown run by Holyfield who took a would-be tackler into the end zone. The play before the score featured Fromm obtaining a first down with his legs on the drive’s only third down.

After the Bulldogs forced a 3-and-out for a Kentucky punt, Swift struck for Georgia’s longest rushing score of the year. Untouched, Swift got through the line and it was daylight as he went 83 yards – the longest run by a Bulldog since Nick Chubb in 2015 – to give Georgia the commanding 28-3 advantage.

Kentucky’s Benny Snell capped a 75-yard drive with a nine-yard TD run to make it 28-10. Snell entered the game leading the conference in rushing with an average of 116.9 yards a game, however the Georgia defense bottled the junior up for 73 yards on 20 carries.

Answering back with points was Georgia on a 13-play, 57-yard drive that resulted in a Rodrigo Blankenship 23-yard field goal at the 11:44 mark in the fourth quarter. Wildcats’ receiver Asim Rose curtailed a juggling catch and run of 31 yards, making it a 31-17 game with 9:01 on the game clock.

Georgia burned five and a half minutes off the clock on the ensuing drive. Among the rushes was a career first carry for senior wide receiver Jayson Stanley that went for 34 yards on an end around. Blankenship connected on a 38-yard field goal to tack put it at its final score of 34-17.

Georgia finishes its regular season schedule out at home, starting with the Auburn Tigers next Saturday, Nov. 10 with time to be announced.