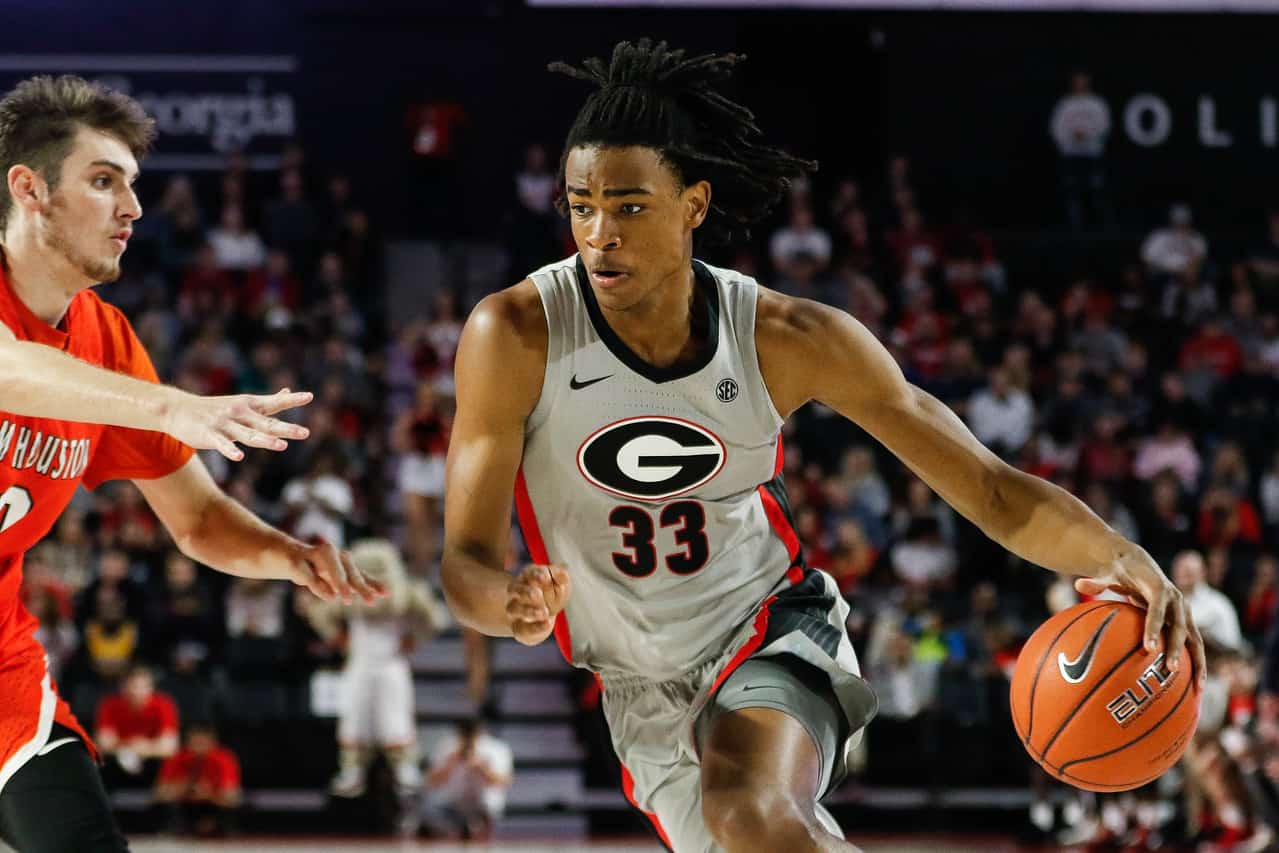 ATHENS, Ga. – The University of Georgia men’s basketball team won its second consecutive game at home with a victory over the Sam Houston State Bearkats 75-64 in Stegeman Coliseum on Friday night.

Sophomores Rayshaun Hammonds (15) and Nicolas Claxton (13) led the night in points. They led in rebounds as well with seven and eight respectively. Georgia also shot 76 percent from the free throw line comparing 29-of-38 to Sam Houston State’s 5-of-7.

Claxton had the first points of the night with a pair of free throws and a layup, the first of 10 Bulldogs to score in the opening half. The lead changed six times in the half including three times in the last 10 minutes. Georgia (2-1) claimed its largest lead of the half with 27 seconds remaining, a 38-32 margin, from a freshman Tye Fagan 3-pointer. The Bulldogs entered intermission with the score at 38-33.

Coming back to the court, the Bearkats (2-3) went on a seven-point run to take the edge from Georgia. After each team traded the lead back and forth, the Bulldogs used an 11-point run to gain the lead 61-55, which Georgia kept for the rest of the game. Five Claxton points, a pair of free throws from junior Tyree Crump and a senior E’Torrion Wilridge layup forced a Sam Houston State timeout. After the timeout, the production continued: Claxton claimed the defensive rebound and found Hammonds down the court for the dunk.

At the 13-second mark, a layup from Fagan gave Georgia a 13-point advantage, the largest of the night, over the Bearkats 74-61. Sam Houston State sank a three to quell the margin to 11 but it was not enough to influence the 75-64 Georgia victory.

The Bulldogs take to the skies for the Caymans Classic in Grand Cayman on November 19-20 where they will face Illinois State and others.

• Sam Houston State represented the first opponent Georgia has faced that finished the 2017-18 campaign with 20+ wins.

• Down 55-50, Georgia rallied off nine straight points to obtain the lead that was not relinquished.

• Heavy free throw differential. Georgia went 29-of-38 (76%), while SHSU went 5-of-7 (71%). The Bulldogs’ highest free throw makes last season was 28. Nicolas Claxton had a team-high and career-high seven free throw makes. Rayshaun Hammonds and Tyree Crump were perfect from the line, going 5 for 5 and 6 for 6, respectively.

• After back-to-back games of 20+ turnovers, the Bulldogs kept their mistakes to just 11.

• Eleven different Bulldogs notched points in the game including 10 in the first half.

• Senior Derek Ogbeide tallied five rebounds, moving himself into the No. 16 spot on Georgia’s all-time rebound list. The forward entered the contest trailing Ray Jeffords by one board. Ogbeide is now 17 away from No. 15 James Banks.

• The first half consisted of six lead changes with Georgia holding the slim lead at 38-33. The Bulldogs shot 50% (12-of-24) from the floor, while the Bearkats had a 36.4% (12-of-33) clip. Bearkat senior Cameron Delaney led all scorers with 13 points, while William Jackson had a team-high seven for Georgia.

On the flow of the game…
“I tell our team, especially at night, to come in and bring the energy. The crowd will respond to that. Don’t wait for it to get going, you bring the energy and let the crowd see what we’re doing. And that’s exactly what happened. The crowd was excellent. They helped us through some big moments. They got on their feet. When a game is tight like this, it’s always in balance because it’s always up for momentum. Momentum is always up for grabs. Obviously it didn’t give us three-point shooting the way that we wanted. But it did give us drives, it did give us getting to the foul line, and the bottom line of having 38 free throws to their 7.”

On Nicolas Claxton…
“We had 48 deflections in one game and 43 in another. Deflections aren’t a governed stat in NCAA or NBA basketball, but to me a deflection is not only a steal or a blocked shot, it’s you get a tip, you draw a charge. I tip it, Chuck grabs it, that’s 2 deflections. Those are the type of things. We had 53 tonight. Our goal was 50. I only had 4 other players, and all four played in the NBA, who have ever had more than 18 deflections, and Nicolas Claxton had 18 deflections tonight…18 deflections, 29 minutes, 1 turnover, 8 rebounds, 13 points, and played a lot of point guard for us tonight. That’s the kind of stuff we have to have.”

On the emphasis of defense and what Coach Crean said to the team following halftime…
“I mean we just talked as a team on defense in the huddle and we just knew we had to get a stop on every possession down. We just didn’t want to let them get going because we know they’re a very good team so you don’t want a good team like that get going and get confidence. So we just locked down and get a stop on our end at the same time.”

On the amount of free throws in the game…
“We worked on it every day. At practice in the beginning and in the middle. We do it when we’re very tired and when we get in the game it’s just natural to us. We work on it every day in practice and Coach Crean puts it emphasis for us. We just had to work on it. He be behind us every time we shoot free throws and talks to us to let us know what we need to do to get better.”

On what Crean said for defense in second half…
“Our fans helped us out big time, they were behind 100% us the whole game. In moments we kinda dipped, they picked us up and then we just came together as one.”

On Sam Houston State…
“They played a great game, especially in the first half they were extremely active on the offensive board, and we knew in the second half we were gonna have to put a body on people and it wasn’t gonna be easy. Of course, we respect them 100% and didn’t take them lightly. We got the job done.”