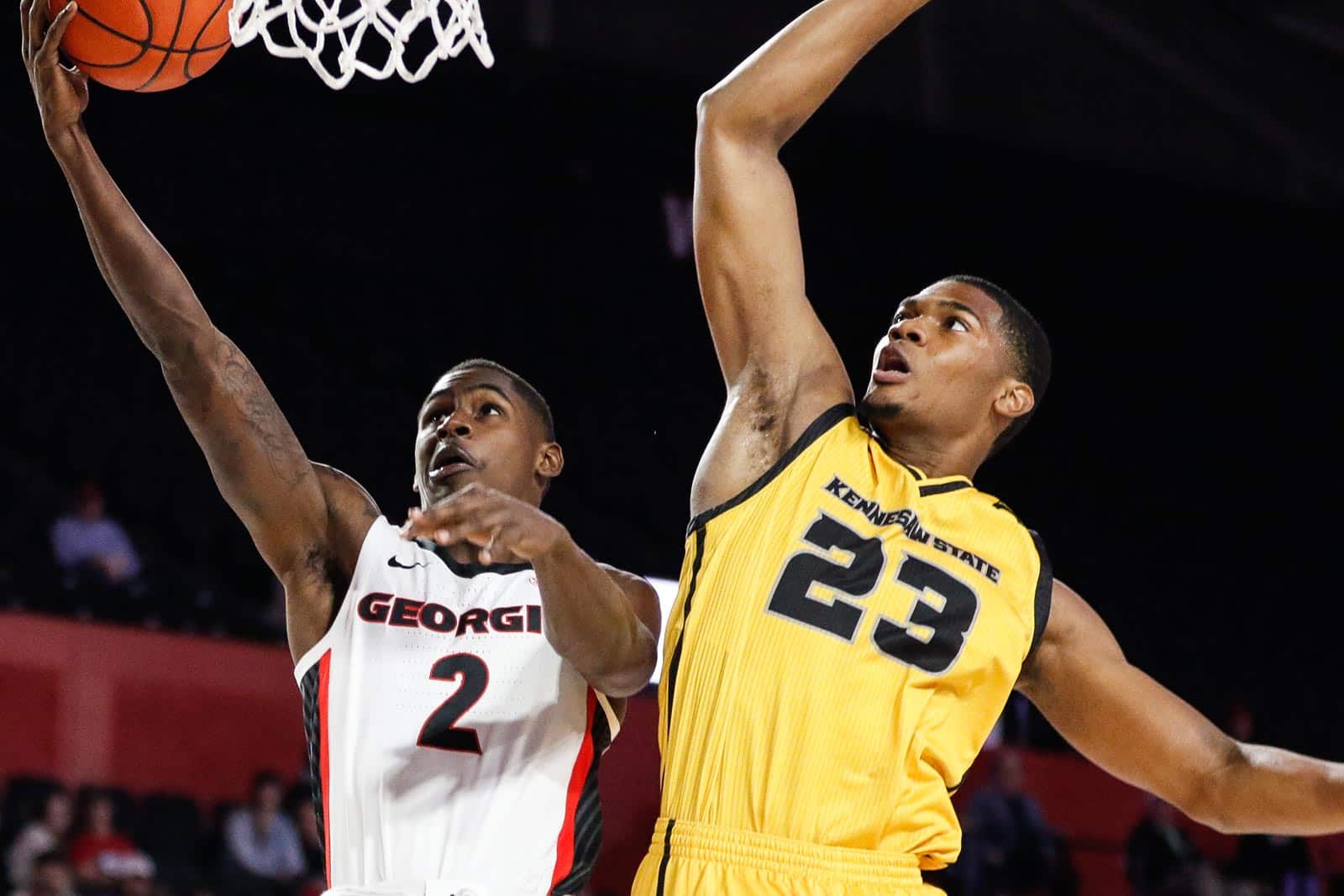 Sophomore Nicolas Claxton led in points with 16, in addition to snagging 15 rebounds, a career-high, contributing to his third double-double in this season alone. Claxton is the only other Bulldog to do so since Trey Thompkins in 2010.  Sophomore Rayshaun Hammonds (14) and junior Jordan Harris (10) also registered team-high point margins for the night.

“I’m really proud of how the guys played tonight,” said Georgia head coach Tom Crean. “Especially because we have had long, hard days since we’ve been home getting ourselves better. There’s a lot of room to get better, and we do have much more room in that capacity right now in this short time. To come out here tonight and play like that and play with better efficiency was important.”

A Hammonds dunk and free throw established the Georgia (4-3) lead 5-4. The Owls (1-7) fought back to tie the game for a second time bringing the score to 11-10, but a three from junior Tyree Crump, his first of three on the night, brought the margin up to four. Georgia did not relinquish the lead for the remainder of the game.

Freshman Ignas Sargiūnas grabbed his first career steal, breaking away down the court for a layup, igniting a 10-0 run for the Bulldogs. A sophomore Teshaun Hightower layup established Georgia’s first double-digit lead of the night (11) with 7:46 remaining in the first half.

Next, four Bulldogs contributed to a 15-0 point run, started by a 3-pointer from Crump. The run posted the first 20-plus point margin of the night at 22 with a Hammonds layup. Georgia finished the half leading 39-20.

Coming back to the court, Georgia maintained a 10-plus point lead for the entirety of the half. The Bulldogs went on a 14-0 run at the 12:26 mark, initiated by a Claxton dunk followed by points from Fagan, Harris, and Hammonds. The run supplied Georgia’s first 30-point lead of the game. A dunk from freshman Amanze Ngumezi with 30 seconds left notched the 35-point lead, the largest of the night, ensuring the 84-51 Georgia victory.

With four rebounds on the night, senior Derek Ogbeide entered the top-15 in boards in school history, tied with James Banks at 654.

Georgia posted a 52 percent clip from the field while holding the Owls to 28 percent on field goals and 7 percent on 3-pointers. The Bulldogs also won the rebound battle with 53 total to Kennesaw State’s 35. Georgia held Kennesaw State’s Tyler Hooker to his second-lowest output this season with 11 points. Hooker entered the game leading the Atlantic Sun in scoring with 19.6 points a game.

The Bulldogs come back to Stegeman on Dec. 3 against the Texas Southern Tigers at 7 p.m. on the SEC Network Plus.

• The win moves the series record vs. Kennesaw State University to 3-0 in Georgia’s favor.

• For the third time this season, the starting lineup featured William Jackson II, Teshaun Hightower, Rayshaun Hammonds, Nicolas Claxton, and Derek Ogbeide. The Bulldogs are now 2-1 with that starting lineup (Savannah State and Temple). Hammonds, Claxton and Ogbeide have started every game this season. Hammonds and Ogbeide have started 11 and 13 straight games going back to last season, respectively. William Jackson started his 55th career game and sixth of the season.

• A 10-point first half run gave UGA a 24-11 lead that the Bulldogs didn’t relinquish the rest of the game. Later a 15-0 run strengthened the lead to 39-17 before the first half ended with a 39-20 score. At the half, eight Bulldogs had a least one field goal, while Kennesaw State had eight total field goals.

• Also defensively, Georgia held Kennesaw State’s Tyler Hooker to his second-lowest output this season with 11 points. Hooker entered the game leading the Atlantic Sun in scoring with 19.6 points a game.

• Sharing the ball, Bulldogs finished with 20 assists for their second game with at least 20 assists this season. Last season, Georgia tallied just three such games.

“I thought our games came out with an excellent mindset. For us, we have got to come out and create our own energy and the fans will feed off of that. Let’s not rely on anyone else, let’s rely on ourselves. We have gotten so much better. We went to the zone early, real early, earlier than I thought we would. I thought that stifled them a little bit. Changing that up a bit helped us and got ourselves going. I’m really proud of how the guys played tonight. Especially because we have had long, hard days since we’ve been home getting ourselves better. There’s a lot of room to get better, and we do have much more room in that capacity right now in this short time. To come out here tonight and play like that and play with better efficiency was important.”

On shooting the three…

“We’ll get to a point where we’re firing them off the break, but we’re not there right now. We practice it all the time but we’re not there. Your threes have got to come on inside-outs. They’ve got to come on drive and kicks through the paint and on reversals, making that quick next pass. Tonight, I thought we did a better job of drawing help. We’re probably going to have to run more ball screens with this team than maybe what we have wanted to, but I think we got to get a downhill game going better which creates some of that. We have got to get better with our rolling. We’re definitely better with our post-ups and posting deeper. Now we got to do a better job with our rolling. The harder you roll, the more it brings in the help, which will create even more looks on the perimeter.”

“We came out strong, when we went to the Cayman Islands we had a little rough patch there. So we knew we needed to come back here and our fans were behind us 100%. We came back and got the job done.”

On energy on big runs during the game…

“I feel like a lot of times the fans, we might come down hit a three, get a dunk, and the fans they generate a lot of energy and we most definitely feed off of that. We look forward to having that down the road.”

On the transition offense…

“I feel like we still have a lot more to improve. That comes from forcing turnovers, defensive rebounds, and everybody just being ready to just get out and run and get the easy baskets in transition, which we did tonight.”

On the defense in tonight’s game…

“I mean we gave up a lot of baskets last game. So, the biggest thing for us today was just to come back and defend, and play well in front of the home crowd, and let everyone know we are still here, we’re still together. ”

On getting back on the court…

“For me, I was ready. I didn’t play much at the Caymans, so I was definitely ready. We did have a couple days off, but we were ready to get back to recover from the loss we took. I don’t think we had any problems getting ready for this game. To mentally prepare we had some great practices to lead over to this game. This was definitely a good win for us.”