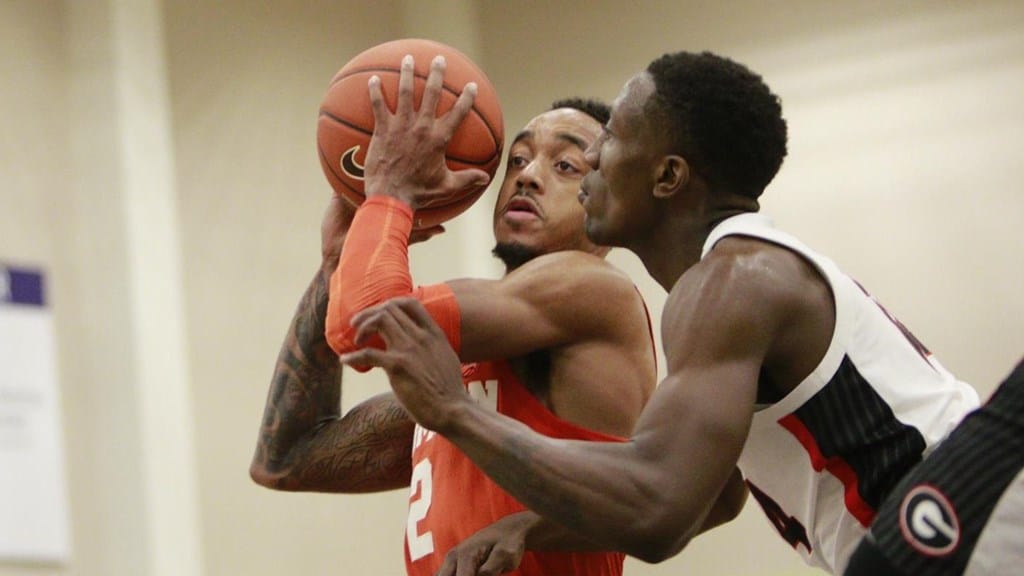 GEORGE TOWN, Grand Cayman – The University of Georgia men’s basketball team dropped a 64-49 contest to the 16th-ranked Clemson Tigers in the second day of the Caymans Classic on Tuesday afternoon at John Gray Gymnasium.

Nicolas Claxton, a sophomore forward, finished as the top-rebounder for the Bulldogs, hauling in nine rebounds. Defensively, he was a force, accumulating five blocks, which ties his career high that was set against Savannah State in the first game of the season. Sophomore forward Rayshaun Hammonds also contributed on the glass by grabbing seven rebounds for Georgia.

“I think what we learned yesterday is what happens when you come out as a team,” said Georgia head coach Tom Crean. “When you come out and you play together, you realize you are only as good as your teammates and that is not how we played today. We have a lot of growing up to do, and we will. We have got to get it turned around in a hurry. We have got to go home and get better and get in better shape.”

In the first half, Crump led the team in scoring with eight points. Midway through the half, Crump scored a layup to bring the Bulldogs within one point of a 12-11 Tiger lead. Clemson then went on an 8-0 run, but a 3-point basket by Crump made it a six-point game with the Tigers leading 20-14.

During a 7-0 run by Georgia, Crump scored a three-pointer to close Clemson’s lead to single-digits, making the score 32-24 with a little over two minutes to play before halftime. Ignas Sargiunas went 2-of-2 from the line to take the Bulldogs into the half down by eight points with a score of 34-26.

In the second half, Georgia was able to close the gap with Clemson to 10 points twice. Clemson built its lead to 12 until Hammonds moved it to 10 points with a shot at the buzzer with less than eight minutes to play. Later, with the score at 59-48, Crump brought it to a 10-point game again with a free-throw, but the Bulldogs were unable to eclipse the double-digit deficit the Tigers maintained through the rest of the game.

Georgia will continue play tomorrow in the consolation game at 5 p.m., versus the loser of the Georgia State and Creighton game later Tuesday evening.