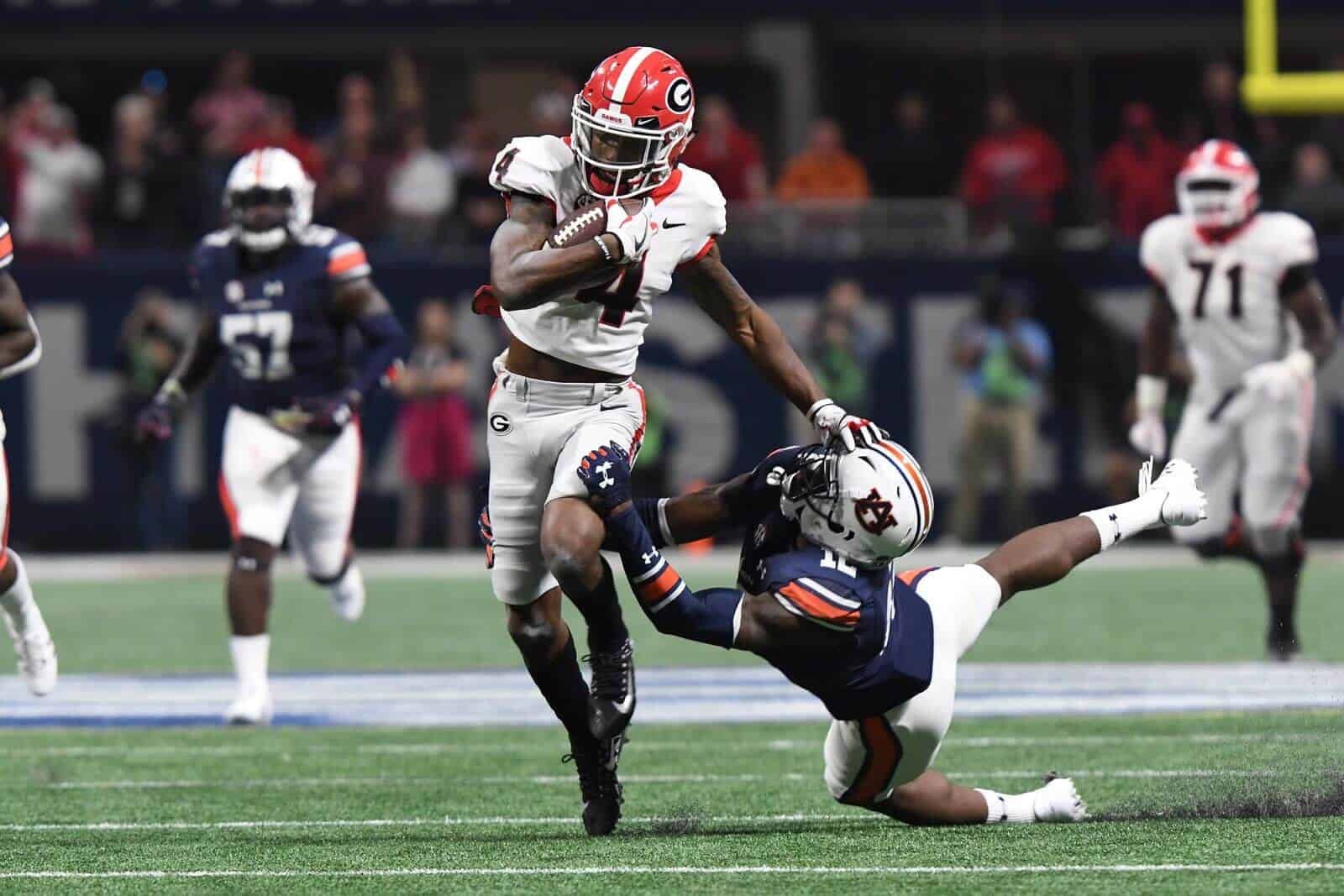 The Georgia Bulldogs are set to take on the Auburn Tigers on Saturday, Nov. 10 at Sanford Stadium in Athens, Georgia. The Georgia-Auburn game time is set for 7:00pm ET and it will be televised by ESPN.

Georgia is currently ranked 5th in the College Football Playoff rankings, AP Poll, and Coaches Poll. The Bulldogs (8-1, 6-1 SEC) are coming off of a 34-17 win at then ninth-ranked Kentucky in Lexington last weekend.

Auburn (6-3, 3-3 SEC) slipped into the College Football Playoff rankings earlier this week at No. 24. The Tigers are second in “others receiving votes” in both the AP and Coaches polls.

The Georgia-Auburn series, dubbed “The Deep South’s Oldest Rivalry,” was last played in the 2017 SEC Championship Game in Atlanta. The Bulldogs defeated the Tigers 28-7 in that game, returning the favor to the Tigers who stomped the Bulldogs 40-17 in Auburn three weeks earlier. Georgia leads the overall series with Auburn 58-56-8.

SEC Eastern Division Champs Face Auburn
Fifth-ranked Georgia (8-1, 6-1 SEC) plays host to Auburn (6-3, 3-3 SEC) Saturday night on ESPN, and the Bulldogs look to finish the SEC regular season with only one blemish. The Bulldogs have already secured their spot in next month’s SEC Champion- ship Game where they will face top-ranked Alabama.

Georgia closes out the regular season with three straight contests at Sanford Stadium. The Bulldogs recently com- pleted a three-game stretch on the road, going 2-1 against No. 13 LSU in Baton Rouge, No. 9 Florida in Jacksonville and No. 9 Kentucky in Lexington.

Auburn is 2-1 against ranked opponents. The Tigers opened the season with an impressive 21-16 win
over then sixth-ranked Washington in the Chick-fil-A Kickoff Clas- sic in Atlanta. On Sept. 15, No. 12 LSU beat the Tigers 22-21 in Auburn. Last Saturday in Auburn, the Tigers rallied from a 10-point deficit with seven minutes left in the fourth quarter to upset No. 25 Texas A&M 28-24. It was the first time in the seven-game SEC series between the clubs that the home team won.

Georgia will make its second straight appearance in the SEC Championship Game. The Bulldogs have either shared or outright won nine Eastern Division titles and have accumulated 13 SEC titles since 1942, the most recent coming in 2017.

In the initial College Football Playoff (CFP) rankings last week, Georgia was ranked No. 6. The Bulldogs started at No. 1 in the 2017 CFP rankings and finished at No. 3 to advance to the Rose Bowl Game before making it to the CFP National Championships.

Series History For Deep South’s Oldest Rivalry
After Georgia split its games with Auburn last year, the Bulldogs improved their series lead to 58-56-8. The road team has a better record in the series as Georgia is 16-12-2 on the Plains while Auburn is 18-14 in Athens. In 2017, the No. 2 Bulldogs fell to the No. 10 Tigers 40-17 at Auburn. Then, No. 6 Georgia topped No. 2 Auburn 28-7 in the SEC Championship Game in Atlanta.

Saturday will mark the 122nd meeting between Georgia and Auburn, making it the fourth most played active series in the NCAA FBS (tied with Oregon-Oregon State). The Bulldogs and Tigers first squared off in 1892 in Atlanta’s Piedmont Park. The only event that interrupted the series was World War I as the teams did not play in 1917-18 and 1943.

Also of note in the series, the all-time point total differential is 110 with Georgia leading 1,998 to 1,888. The 2012-13 seasons saw the Bulldogs head to Auburn for con- secutive years, marking the first time the game had been played at the same site for two years in a row since 1958. The game was played in Columbus during a stretch from 1930-58. The first 10 games were played in Atlanta starting in 1892.

2017 SEC Championship Flashback: Georgia 28, Auburn 7
Georgia claimed its 13th SEC title in school history with a 28-7 win over No. 2 Auburn in the second year of the Kirby Smart era. The 13 SEC titles ranks tied for sec- ond most in league history as Alabama has 26 and UT also has 13. Georgia made its sixth appearance in the SEC Championship Game, its first since 2012, and the Bulldogs evened their record in these contests at 3-3.

This was the fifth time that Georgia and Auburn had squared off when both teams were ranked in the top 10 and this was Georgia’s first win. In the regular season meet- ing won by Auburn, Georgia was held to 230 yards of total offense including 46 rushing yards, all season-lows. In the SEC Championship Game, the Bulldogs tallied 421 yards of total offense.

Hall of Fame Recongition For Matt Stinchcomb
Before the Georgia-Auburn game Saturday, Bulldog great Matt Stinchcomb will have his on-campus recognition for being elected to the College Football Hall of Fame. He becomes the 14th former Bulldog player to be inducted into the Hall of Fame and the 18th selection overall including former coaches. He will be officially inducted on Dec. 4 at the annual National Football Foundation awards dinner at the Hilton Midtown Hotel in New York City.