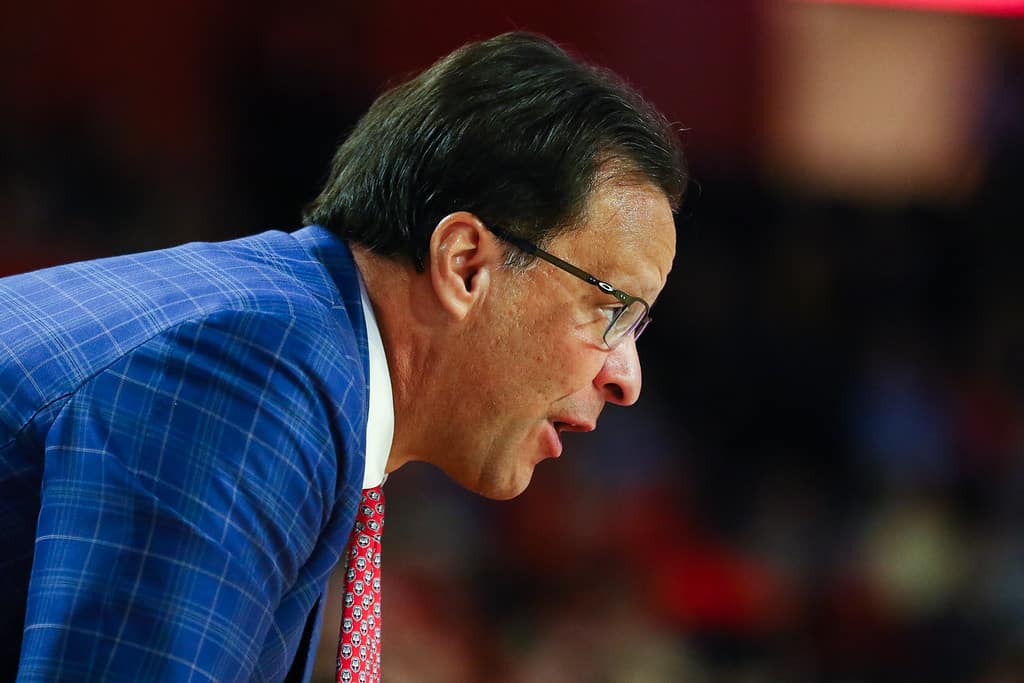 PHILADELPHIA, Pa. – With less than a minute remaining, the University of Georgia Bulldogs basketball team brought its Tuesday night contest with Temple within two points, but a pair of decisive buckets from the Owls sealed the 81-77 final at the Liacouras Center.

Senior Derek Ogbeide led the Bulldogs with 16 points and 11 rebounds, registering the seventh double-double of his career, just two points shy of his career high. Junior Tyree Crump contributed 16 points off the bench, his second consecutive double-digit outing of the season, while sophomore Rayshaun Hammonds added 13, marking another two-time double-digit Bulldog to open the 2018-19 campaign.

“The character was definitely there, but we have to learn to be the same team both halves,” Georgia head coach Tom Crean said. “The first half, we were back on our heels against the pressure, and we weren’t attacking once we set the screen in the middle of the floor. We didn’t attack, and we work on attacking every day. It’s not natural for them to be on the attack; it’s not natural for them to play that way, and we just have to learn to do that, and we will. I was definitely proud of the way they played.”

After claiming a 4-2 lead from back-to-back Nicolas Claxton and Hammonds layups, the Bulldogs secured the lead until the 10:52 mark, when a pair of Alani Moore buckets handed the Owls the margin at 19-17. Georgia immediately responded, using a three-point play from Ogbeide for the one-point edge. Three lead changes ensued, until Temple pulled away for the 45-34 score at intermission with a Shizz Alston 3-pointer at the buzzer.

In the second half, a couple E’Torrion Wilridge free throws and an Ogbeide dunk brought the contest within four points, but the Owls maintained a safe distance until 9:31 remaining in the game. Then, Georgia used seven unanswered points to fuel a 9-2 run, highlighted by four Tye Fagan points and a Teshaun Hightower 3-pointer for the 63-58 score.

After Hightower’s three, each team traded baskets five consecutive times – complete with six Crump points from behind the arc. Another Crump basket, this time a jumper, followed by a pair of drained free throws by Ogbeide cut the Georgia deficit to three with 1:12 remaining.

Through 40 minutes, the Bulldogs won the field-goal percentage and rebound battle at 50.9 percent to 43.5 and 39 to 32. Georgia also paced its opponent with 42 points in the paint and used 36 points off the bench, including 16 from Crump. ​​

“I’m proud of the way we responded in the second half,” Crean said. “We just have to build on it and get a good crowd on Friday against Sam Houston State.”​

Up next, Georgia returns home to Stegeman Coliseum on Friday, November 16. The Bulldogs’ matchup with Sam Houston State is slated for 7 p.m. on SEC Network +.