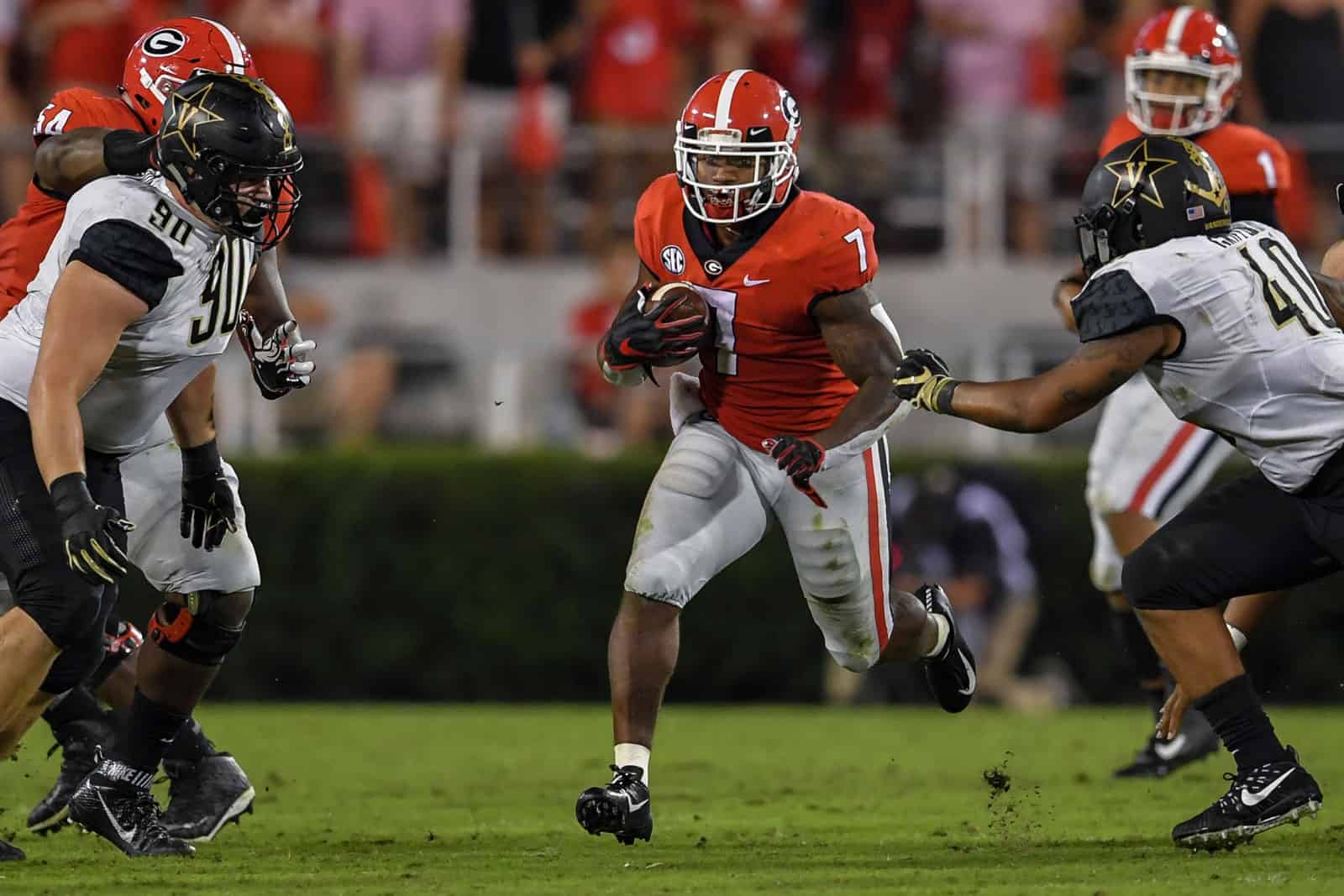 ATHENS, Ga. – The second-ranked University of Georgia Bulldogs remained perfect with a 41-13 rout of the Vanderbilt Commodores at Sanford Stadium on Saturday night.

Junior wide receiver Riley Ridley led eight different Georgia targets with five receptions, 57 yards and a touchdown, while junior Elijah Holyfield paced the Bulldog rushers – who collected a total of 219 yards as a group – with six carries on 64 yards and a touchdown.

Sophomore defensive back Richard LeCounte supplied six solo stops for the Bulldog defense, who limited the Commodores to two field goals until the final seconds of the game. Freshman inside linebacker Channing Tindall also provided five tackles on the night.

“We ran the ball against a team that said, ‘You’re not going to run on us,'” Georgia head coach Kirby Smart said. “But we’ve got to continue to improve…It starts with discipline. It starts with tying your shoes before practice, being on time for practice, being dressed properly, following the rules and regulations.”

At the 10:30 mark in the opening period, Vanderbilt became the first team to lead against the Bulldogs this season, using a 25-yard field goal to cap a five-play, 50-yard scoring drive.

Following a Rodrigo Blankenship touchback, the Bulldogs used one play to respond: Fromm found Godwin for a 75-yard touchdown, finalized with a five-yard shake-off of two Commodore defenders. A Blankenship PAT ensured a 7-3 margin.

Through the second quarter, the defense supplied a consistent source of pressure with two forced fumbles from junior inside linebacker Tae Crowder and LeCounte, despite both finding Commodores for the recoveries. The Bulldog defense culminated at the 10:35 mark in the second quarter, when a 12-play, 81-yard Vanderbilt drive was halted at the Georgia 14-yard line on a failed fourth-down attempt.

With the Bulldog offense back in possession, Holyfield settled an 8-play, 86-yard drive with an airborne, horizontal dive into the end zone for a 24-yard touchdown run and the 14-3 lead.

The Commodores tacked on another field goal with 2:18 remaining in the first half, but the Bulldog defense held the Vanderbilt offensive unit scoreless until the final seven seconds of the game.

Before the Bulldogs headed into the half, Fromm used junior tight end Isaac Nauta, junior wide receivers Mecole Hardman and Ridley to march to the Vanderbilt 10-yard line. Ridley reined in a 10-yard touchdown, keeping one foot in, to send Georgia into intermission with a 21-6 advantage.

Receiving the ball in the second half, the Bulldogs opened the frame with an 8-play, 75-yard trudge to the Vanderbilt end zone, finalized by a 35-yard D’Andre Swift explosion past Commodore defenders for the touchdown and 28-6 score.

Blankenship used his 53-yarder to make the game 31-6, before Herrien, flanked by the Georgia offensive line, fought for the touchdown after dropping and recovering the ball for the 38-6 clip, complete with a Blankenship extra point.

Blankenship added his second field goal of the day for added insurance before the Commodores produced a final touchdown as the final seconds on the clock winded down.

Next, the Bulldogs head to Baton Rouge, Louisiana for a matchup with LSU. The contest is slated for 3:30 p.m. on CBS.

Efficient Fromm: Sophomore QB Jake Fromm finished 17-for-23 for 276 yards and tied his career high with three touchdown passes to three different players in three quarters of play. Fromm completed passes to seven different Bulldogs and had touchdowns to senior WR Terry Godwin (75-yarder), junior WR Riley Ridley (10-yarder) and sophomore TB D’Andre Swift (35-yarder). Swift had four catches for 49 yards. His score was the second receiving touchdown of his career and the first since a 5-yard reception at Vanderbilt in 2017. Ridley finished with a team-high five catches for 57 yards while Godwin had two catches for 95 yards.

True freshman QB Justin Fields completed the game 3-for-6 for 53 yards and rushed for 18 yards on four carries. True freshman QB Matthew Downing saw action in the fourth quarter, going 1-for-2 for 12 yards

Trailing…Briefly: Vanderbilt kicked a 25-yard field goal at the 10:30 mark in the opening period to take a 3-0 lead on a five-play, 50-yard scoring drive. This marked the first time the Bulldogs had trailed all year. Following a touchback on the ensuing kickoff, Fromm connected with Terry Godwin for a 75-yard touchdown on the first play of the drive, which marked the longest passing play of the 2018 season thus far. This was a career-long catch for Godwin and the longest for the Bulldogs since Fromm connected with Mecole Hardman for an 80-yard score in the 2018 CFP National Championship versus Alabama. Georgia outscored Vanderbilt 17-0 in the third quarter and the Commodores final TD came with two seconds left in the contest.

Series History and Homecoming: With tonight’s 41-6 victory, Georgia now leads the all-time series with Vanderbilt 57-20-2 including 21-4 when it’s Homecoming. Overall, Georgia is 77-18-2 in Homecoming contests.

Red Zone Stop Turns Into Points: While the Commodores made the best out of their first trip to the Red Zone, Georgia’s defense held Vanderbilt scoreless on their second trip to the Red Zone. The Bulldogs stalled a drive that started on Vanderbilt’s 5-yard line by stopping the Commodores on the Georgia 14-yard line during a 4th-and-1 situation. This was the Bulldogs’ third Red Zone stop of the year. Following that stop, Georgia marched 86 yards down the field and capped the eight-play drive with a 24-yard touchdown run from junior TB Elijah Holyfield.

Blankenship Sets PAT Record, Connects From Deep: Junior PK Rodrigo Blankenship connected on five extra points to make him 32-for-32 on the year and to give him 121 straight. This topped Blair Walsh’s school record of 119. Blankenship also had touchbacks on seven of eight kickoffs, giving him 44 on the year and 132 in his career.

In the second half, Blankenship drilled a 53-yard field goal to put Georgia up 31-6. He is now 3-for-4 from 50+ in his career. This kick was the longest for Blankenship since he sent a career-long 55 yarder through the uprights versus Oklahoma in the Rose Bowl Game. He added a 28-yarder in the fourth quarter. He is 9-for-11 on field goals.

Group Effort In The Ground Game: Georgia gained 219 yards on the ground in 34 carries for a 6.4 average. Junior Elijah Holyfield led the group with 64 yards on six carries (10.7 avg.) with one TD while freshman James Cook had seven carries for 56 yards (8.0 avg.) while sophomore D’Andre Swift had seven for 50 yards (7.1 avg.).

Penalties: Georgia had 13 penalties for 115 yards while Vanderbilt was flagged nine times for 69 yards.

Injuries: Redshirt sophomore LG Solomon Kindley went down in the first quarter with a right knee injury. True freshman Trey Hill came in for Kindley. This is the third starting offensive lineman for the Bulldogs that has gone down at some point this year (sophomore LT Andrew Thomas, redshirt sophomore RG Ben Cleveland. Thomas has returned to the lineup while Cleveland is still out.

Thoughts on the game…
“We played sloppy and I was disappointed with the way we played. It’s sad when you have undisciplined penalties. We’re trying to teach our team a lesson – you don’t beat good football teams having those errors. We did a few good things, too, and I don’t want to overshadow that. We ran the ball against a team that said, ‘You’re not going to run on us.’ But we’ve got to continue to improve.”

On quarterbacks Jake Fromm and Justin Fields…
“Both kids continue to grow. For our offense, they add dimensions that we need. They’re both good players.”

On LSU …
“LSU has a great program and a physical team. They are coming off a tough loss to Florida, so they will be ready to bounce back. Their season will be at stake. We’ll have to bow our back and be ready to play a good football team. It’s always physical when you play LSU.”

On performing better in the second half …
“They were a little more tired. When you start the game, their cleats are buried in the dirt and they’re harder to move. We also didn’t execute as well, so were they stopping us or were we stopping us?”

On the offensive performance, which included his first touchdown catch of 2018, a 75-yard strike from Jake Fromm in the first quarter…
“As a receiver it felt good to get your first touchdown, especially being in Sanford Stadium. It wasn’t our best game, but we got more things to improve on.”

On offensive tempo, particularly the two-minute drill to score at the end of the first half…
“That drive was big because that was our first chance tonight that we got to work on our two-minute drill, and it paid off. We practice that every day after practice, and we finally got it tonight. Every guy was on their p’s and q’s. That helped us out.”

On the excitement for the LSU game…
“We just talked about that, too. I’m really excited. I’ve never been down there and I don’t think anybody on this team has had the opportunity to go in their stadium and play a good game of football. We’re going to go in tomorrow, break down the film, start on them and just keep putting our feet in the right direction.”

On the keys for preparing to play Vanderbilt…
“It was composure. It was discipline. It was toughness. That’s what this team is made of: those three things. We’ve got a lot of things to work on and we just look forward to doing it.”

On the emphasis on passing with 341 net yards through the air…
“As a receiver, it’s always good to have the passing game going, but you’ve got to have the run game to be balanced and beat the teams down the trail. We’ve got a lot to work on.”