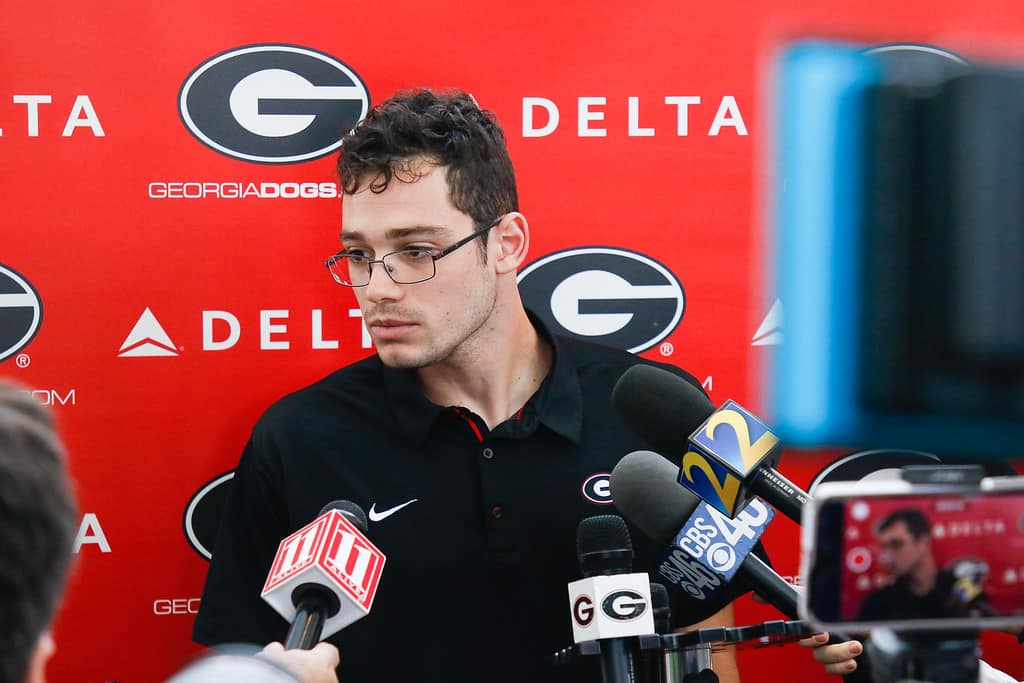 ATHENS, Ga. – Georgia junior place kicker Rodrigo Blankenship was named to the 2018 Allstate AFCA Good Works Team on Thursday. Blankenship is one of 11 players from the NCAA Football Bowl Subdivision (FBS) selected based on their commitment to community service.

For 27 years, the American Football Coaches Association (AFCA) has recognized a select group of college football players committed to making a difference in their communities. There were also 11combined players chosen from the NCAA Football Championship Subdivision (FCS), Divisions II, III and the NAIA.

Blankenship, a Digital and Broadcast Journalism major and native of Marietta, Ga., is the only player from the Southeastern Conference on the FBS 2018 Allstate AFCA Good Works Team.

Blankenship, a 2017 CoSIDA Academic All-District selection, has volunteered for a variety of community service opportunities during his time in Athens. He is a member of the UGA Athletic Association’s Leadership Academy (L.E.A.D.) and has given his time to the following activities and many more: spokesperson for “No More,” which is a public service announcement against domestic violence and sexual assault; visitation at Camp Sunshine, which is a camp that provides support programs for children with cancer and their families; volunteer for the “Empty Bowl” luncheon, which is a luncheon sponsored by the Food Bank of Northeast Georgia where hand-painted ceramic bowls done by the football players were part of a silent auction to raise funds for needy families; and volunteer for the Home Runs for Hometown Rivals, which is a softball game at UGA’s Foley Field for Special Olympians.

On the field, the 2018 Preseason All-American has drilled 37 of 44 career field goal attempts, including 3-for-3 this season. He stands fifth on the NCAA FBS active career leaders’ list for Field Goal Percentage at 84 percent. Five of his misses have come from 40 or more yards. Blankenship has connected on all 101 PATs since 2016 and has 103 kickoff touchbacks in his career, including all 15 in 2018. He is the school record holder in the category for a single season after registering 67 last year.

He has twice been named the SEC Special Teams Player of the Week, most recently receiving the honor this season following his two field goals of 44 and 45 yards and five PATs in the 41-17 rout of #24 South Carolina during the Bulldogs’ league opener on the road.

The 2018 Allstate AFCA Good Works Team will be invited to New Orleans to participate in a special community service project ahead of the 2019 Allstate Sugar Bowl, where the entire team will also be recognized on the field during a halftime presentation.

Fans are encouraged to visit ESPN.com/Allstate to vote for the 2018 Allstate AFCA Good Works Team Captain now through Nov. 23. The Team Captain will be honored at this season’s The Home Depot College Football Awards on ESPN.

The No. 3 Bulldogs (2-0, 1-0 SEC) plays host to Middle Tennessee State University (1-1) in Sanford Stadium at 12 p.m. on Saturday. ESPN News will televise Georgia’s second home game of the year.