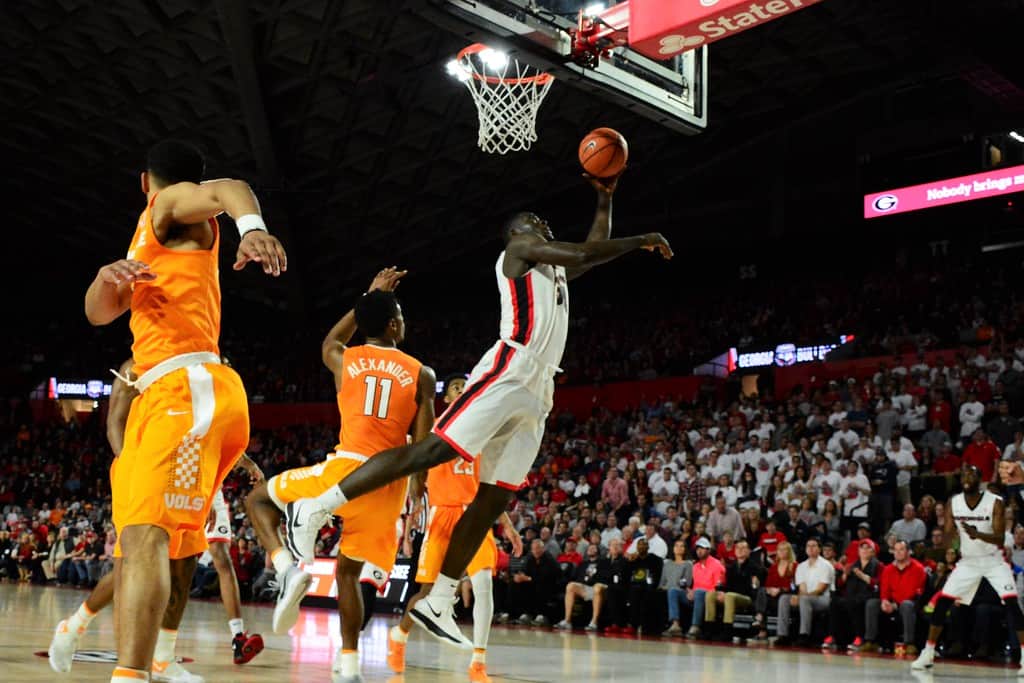 Georgia increases its win streak against Tennessee to five games and the ranked win marks the Bulldogs third of the season. Georgia outshot the Volunteers 42.6 percent to 34.9 percent, making it the fourth time Georgia’s SEC opponent shot below 35 percent.

“We played very determined,” said head coach Mark Fox. “These kids have been through a lot but being at home and having a great crowd, beautiful crowd, makes a huge difference. We were able to play through fatigue, find that extra gear and effort defensively and that was important.”

Tennessee (19-7, 9-5) opened the competition with a jumper by Grant Williams. A pair of free throws from Maten tied the game up shortly after. A huge lay-up from Maten, which drew a Volunteer foul followed by a free throw, gave Georgia its first lead 5-2. The two teams went back and forth several times until a huge three from Maten at the top of the key added to the Bulldogs five point run over Tennessee. Two free throws from freshman forward Nicolas Claxton lengthened the Bulldogs lead to 21-12. Tennessee fought back from a nine point deficit but was two points shy of tying the game before halftime trailing 28-26.

Coming back to action freshman forward Rayshaun Hammonds posted the first points in the paint. A three by Parker launched Georgia over the 30 point mark, 33-26. A three by Jackson brought Georgia 10 points, 38-28, over the Volunteers. Parker stole the ball and went up for a shot drawing a Tennessee foul in which he converted both free throws to combat a 6-0 Volunteer run. Later in the half, a huge lay-up by Ogbeide drew a Tennessee foul that pushed Georgia into the bonus at 5:33 and the made free throw put Georgia up six at 57-51. This, followed by a Crump three brought the sold-out crowd to its feet. Ogbeide scored his fifth consecutive lay-up for the half bringing the edge to 59-51. Three offensive Georgia rebounds brought the ball to Crump who knocked a three widening the margin to eight. Tennessee foul trouble entered Georgia into the double-bonus and a pair of Maten free throws topped the score at 65-58. Georgia came back to the line five more times with Jackson, Crump, thrice, and Ogbeide scoring a combined eight points for a 13 point lead in the last minute of the game. The Volunteers made their way to the line but it wasn’t enough to topple the Georgia lead. The Bulldogs secured victory over the Volunteers 73-62.

From the free throw line, Georgia went 27-for-38 including 10 made free throws in the first half. The 27 made free throws marks the second highest total for Georgia this season. The Volunteers were limited to 10 of 15 from the line.

The Bulldogs return to action at South Carolina on Wednesday, February 21, at 6 p.m. in Columbia.

On the keys to tonight’s win…
“Our team has had a good week and we had a lot of guys contribute. Derek had a big double-double. Tennessee has a terrific team, we have a lot of respect for them and it was a good win for us.”

On the key to slowing down Tennessee’s offense…
“Grant Williams is a great player and having a terrific year and we tried to slow him down. I’m not sure we did great in other places we wanted to, but I thought we did a good enough job on Williams to give us a chance to win.”

On answering multiple Tennessee runs..
“I was really proud of our team because we had to answer one time with Yante on the bench. We had a lot of guys chip in. Turtle played well, Tyree had a good second half. They’re a good team and you’re going to have to answer and we did that.”

On the game…
“We’re a capable team and coach said to not give up so that’s what we’ve got to do every time we play well it it’s going to be a ball game. We’re a good basketball team and we proved that this week now we’re just looking to go to the next game and do the same thing. I think it was more of a we’re a good team, let’s go prove it situation so that’s what we focused on we’ve got to start a roll and get on a winning streak.”

On the game…
We’ve definitely boosted team morale and you know it was much needed, at the end of the season it’s been a quite boost for us.

On his second consecutive double-double…
“It comes down to attention to details and you know whatever my role is I want to make sure I can help the team the best that I can and give my best effort to produce the factor of winning.”