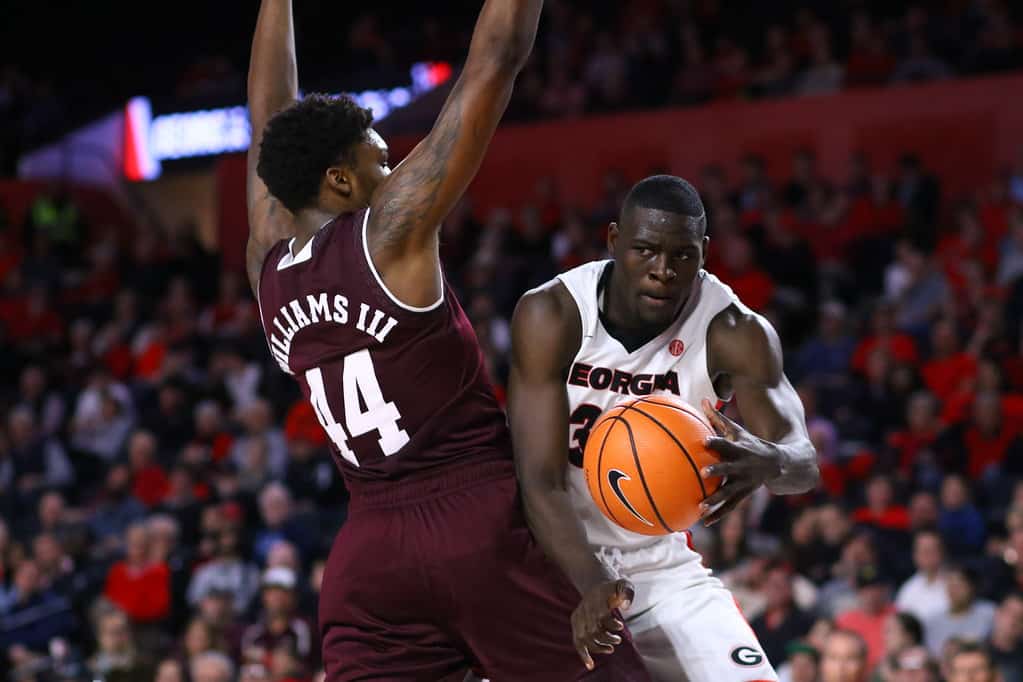 Senior forward Yante Maten was the high-scorer on senior night with his 13th double-double on the season, posting 16 points and 12 boards. Maten has produced double digits in all but one game this season. Freshman guard Teshaun Hightower followed, posting a career-high in points (11), boards (5), and assists (4).

“I thought in the first half the emotion got the best of us,” said Georgia head coach Mark Fox. “The emotion I thought had a little bit of a negative effect in half one, and I thought in half two that our young guys really competed and brought us back. We got a lead, and then we gave up a transition three late which was costly. We made a young mistake against the press on the turnover, and I elected not to a call a timeout late. Very difficult loss, but I was proud of how our team competed in the second half. Credit to Texas A&M, they have a talented team. It was a tough-fought game.”

Georgia started the night putting the first points on the board with a jumper from redshirt senior guard Juwan Parker. Texas A&M (19-11, 8-9) answered seconds later with a three to gain the upper hand 3-2. The lead would then changed four more times over the next four minutes.

A steal on defense from the Aggies brought the ball back into their possession for the 7-6 edge. Maten knocked in a three, followed by a Claxton layup to bring Georgia back on top 11-10. Two massive blocks by freshman forward Nicolas Claxton also prevented Texas A&M from scoring on two possessions.

The Aggies pushed back ahead with two jumpers, bringing the score to 11-14. The game tied again three more times at 17, 19, and 21, until a Texas A&M three established the margin, 24-21, once again. The Aggies held on to the advantage for the remainder of the half and closed the frame with the 37-28 lead.

Coming back to action in the second half, Parker again notched the first points, cutting the Georgia deficit to seven. Hightower beat the shot clock to shrink the gap to three with a layup, but an Aggie free throw brought it back to four. With another Hightower layup, the freshman brought the Bulldogs within two at 44-42.

At the 10:09 mark, a three by sophomore guard Tyree Crump tied the score at 45 for the first time in the second half. Texas A&M answered seconds later with a layup to take back the advantage, but another Crump three coupled with two Maten free throws gave Georgia its’ first lead in the frame, 53-52. Two free throws from Parker added to the Bulldog’s 7-0 run over the Aggies.

A Hightower 3-pointer, with a free throw apiece from Maten and Hightower handed Georgia the four-point lead at the 2:28 mark, but an Aggie three cut the Georgia advantage to one. With less than a minute remaining, a jumper by Texas A&M freshman T.J. Starks was enough to secure the Aggie victory over Georgia, 61-60.

The Bulldogs come back to the court against Tennessee at 8:30 p.m. on Saturday, March 3rd, in Knoxville.

• It was a rebounding war on the glass as Texas A&M grabbed 47 boards, a most against Georgia this year, and the Bulldogs reeled in 44 boards, registering the most against the Aggies this season. Both totals are team-highs for each team.

• The 61 total points by the Aggies mark their fourth-lowest output of the season.

• The Bulldogs bench outscored the Aggies 28-8 including 21-7 in the second half.

• Career night for Teshaun Hightower who finished with new highs in points (11), rebounds (5), assists (4), and 3-pointers made (2). The double-digit scoring output was Hightower’s first of his career.

• Sophomore guard Tyree Crump knocked down three 3-pointers. He has a dozen games this season with multiple 3-pointers including six games with at least three treys.

• Freshman Nicolas Claxton blocked three shots to extend his streak of at least two blocks in a game to four.

On the team’s performance in a close loss…
“It was a hard fought game for sure and I’m disappointed in the loss for our young people. They gave us a really good effort in the second half.”

On preparing for Tennessee Saturday…
“We’ll start re-grouping tomorrow, they’re obviously very disappointed. We’ll re-group tomorrow and try to do what we’ve done all year which is let the last game go in the rear view mirror and focus forward and get ready for the next game.”