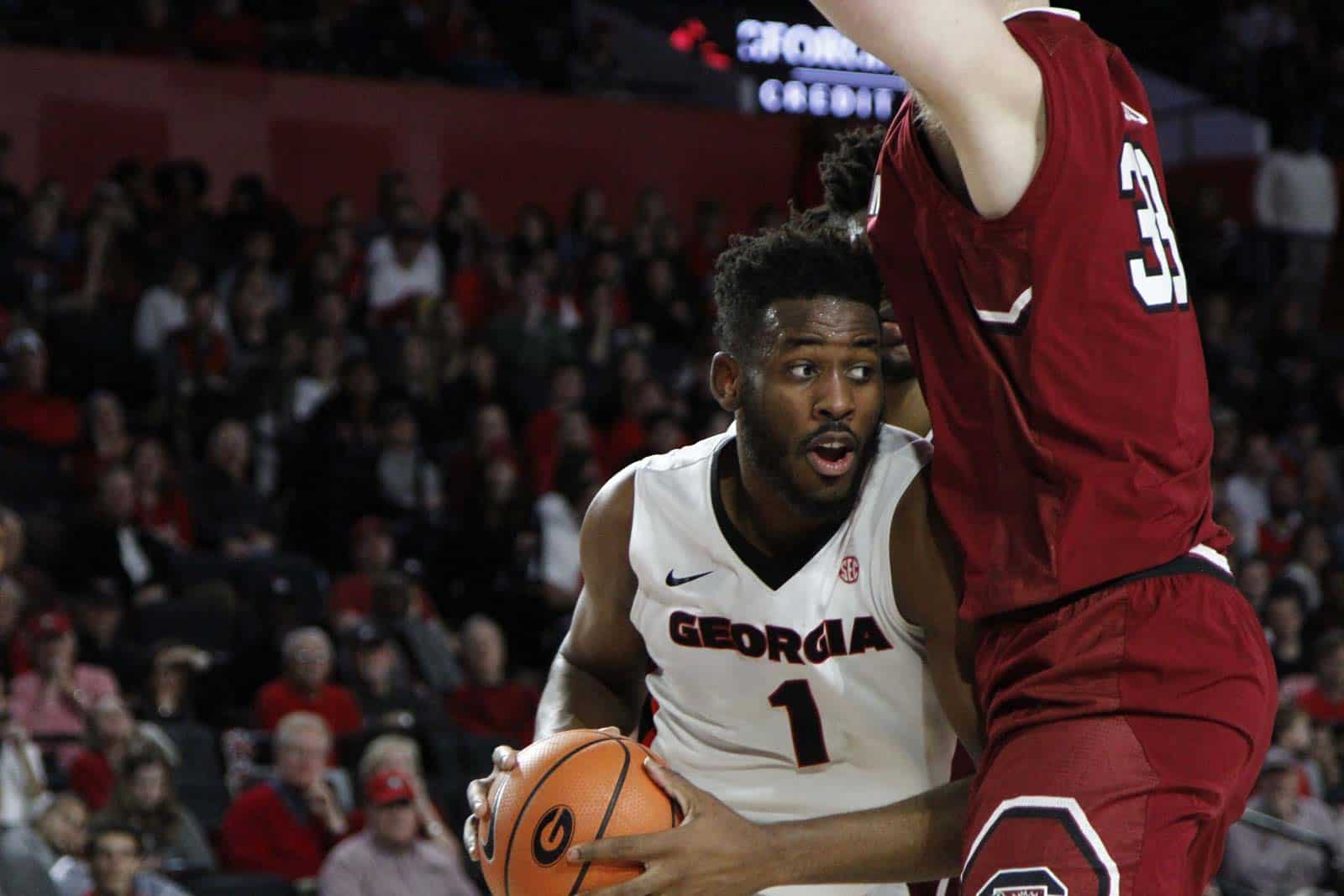 Photo: Steffenie Burns/UGA
Athens, Ga. – The Georgia Bulldogs (11-5, 2-3) edged 64-57 by the South Carolina Gamecocks in Stegeman Coliseum on Saturday afternoon for their first loss at home this season.
The loss snapped Georgia’s home win streak at eight games to start the 2017-18 campaign, its best start since 2010-11. UGA held South Carolina to 27-percent shooting from the field, the Gamecock’s lowest output this season. Prior to tip, the Bulldogs ranks first in the SEC in field goal percent defense, giving up an average of .384 to its opponents.
“Obviously we didn’t play well enough to win we just got beat up on the backboards in the first half and we got ourselves in position to win the game and our free throw shooting in the second half was really really subpar,” said Georgia head coach Mark Fox. “Against quality teams you can’t have those kind of errors. I was real disappointed in our free throw shooting in the first half but South Carolina is a really good defensive team. We anticipated it would be a slugfest and when you have a game like that you have to rebound and make free throws and we didn’t do that.”
Senior forward Yante Maten posted his 15th double-digit game of the season with 25 in addition to tying his season-highs for blocks, with four, and steals with two. The 20-point game by Maten marked his eighth such output this season. Red-shirt senior guard Juwan Parker also had his fifth double-digit game of the season with 11 points.
South Carolina (11-6, 2-3) posted the first points of the game and Maten immediately answered with a jumper. The Gamecocks gained an early lead over Georgia which they maintained for the entirety of the half and eventually the game. Heading into the break, the Gamecocks led by eight points at 37-29.
The Bulldogs notched the game up two separate times in the second half, but were unable to take the lead. Both teams’ stifling defense kept the margin below double digit points the entire game as the largest lead was nine by South Carolina.
Coming back from the half, a Maten lay-up launched the Bulldogs on an 8-2 run, which tied the game for the first time. A Parker jumper, foul and converted free throw at 14:19 made it 39-all. South Carolina fought back to overtake the margin 41-39. In an effort to keep the spread low, Maten, junior forward Derek Ogbeide, and freshman forward Nicolas Claxton each deflected shots out of the hands of the Gamecocks.  Maten tied the score for the second time, 49-49, on a jumper with 3:37 remaining. South Carolina pushed past the Bulldogs to regain the advantage. The Bulldogs drew fouls to regain possession but we unable to catch up to the Gamecocks converted late at the foul line and sealed the victory.
Georgia tallied a total of nine blocks in the game, one short of a season-high. Ogbeide tied his season-high of blocks with three and rebounds with nine.
Georgia returns to action on Tuesday, January 16 against LSU in Baton Rouge, La., at 7:00 p.m.
Head Coach Mark Fox
On the struggles on offense…
“They’re very disruptive on how they play and they’ve done that several years in a row and they’re very physical and they are a hard team to pass and catch against and you end up trying to dribble the ball a lot. This is a game where your guards have to make plays off the bounce and we didn’t make enough of those.”
Senior Forward Yante Maten
On the game…
“At the end of the day it’s going to come down to who wants it more and that wasn’t us today. I personally put that on me because I know I let up a lot of rebounds. We didn’t convert on the free throw line either and in a close game like that it made a big difference in the outcome of the game. We are down definitely because we haven’t lost twice in a row like we did tonight but we can’t let this loss affect our turnaround for LSU.”
Junior Forward Derek Ogbeide
On changing the tide of the game…
“We had several opportunities in which to change the game in a certain way we wanted but hopefully this game won’t hurt us in the long run. As far as us goes we’re looking at going onto the next win against LSU. With our talent we can make up for this and the other losses we have. We just need to push forward.”