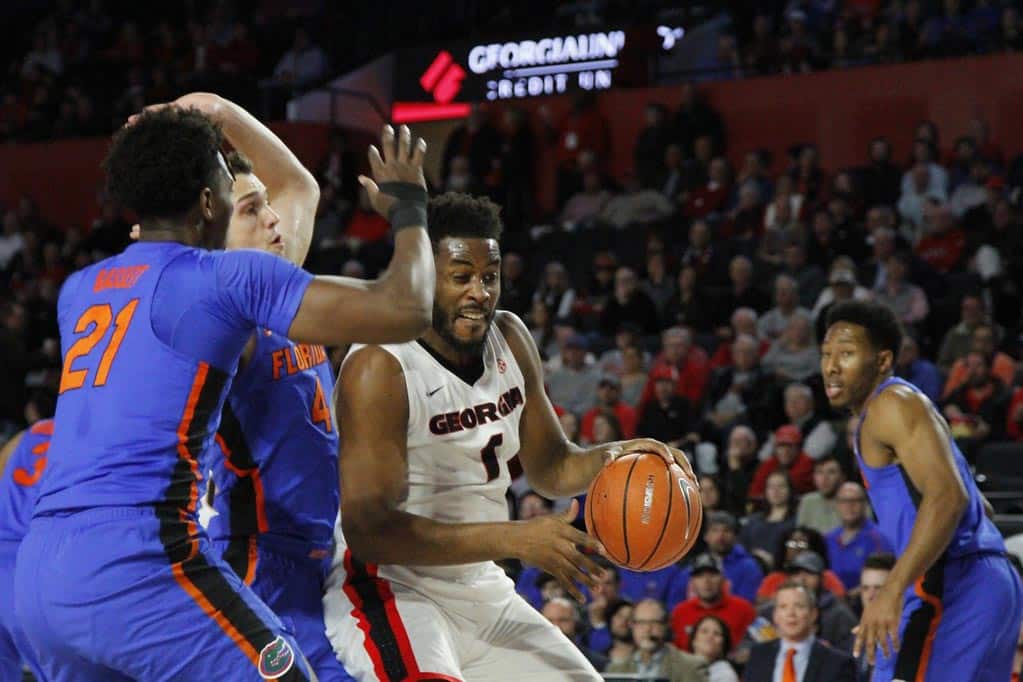 Georgia’s win over a ranked Gator team is the first since 2011-12 when the Bulldogs topped No. 11 Florida 76-62. The Bulldogs limited the conference’s third-highest scoring offense to its lowest point total in conference play and held the Gators to 36.5 percent from the floor – their second-lowest output in SEC play.

“There’s gonna be in a period in every season when you just don’t play great,” said head coach Mark Fox. “It’s the midseason funk and hopefully ours is behind us. Yes, we needed something to go right, but give credit to our kids, they stayed the course and stayed positive, and tonight they were rewarded.”

Florida (15-7, 6-3) had the first points of the game, but Georgia (13-8, 4-5) was able to push past with Jackson sinking a three from the top of the key, followed by a Maten tip-in to tie the game 5-5. Trailing by one at the 15:43 mark, a three by sophomore guard Tyree Crump ignited 11 unanswered points against Florida. A three from Parker in that run propelled the Bulldogs over Florida, 28-26, for their first lead of the night. Gator foul trouble enabled Georgia to shoot 71.4 percent from the line giving the Bulldogs their largest margin, eight, of the half., and Georgia maintained the lead, 37-32, heading into halftime.

Returning to the court, Florida fought to tie the game twice within the first two minutes. A Jalen Hudson 3-pointer gave the Gators the edge, 42-39, for the first time in the second half, but Georgia powered through a five point deficit with a three from freshman forward Nicolas Claxton and tip-in from sophomore guard Jordan Harris to knot the game at 48.

Another Hudson three from the top of the key brought Florida on top once again, 51-50. The Bulldogs answered with junior forward Derek Ogbeide tipping in the ball for the 52-51 advantage. Jackson nabbed a steal on defense causing a Florida foul and his two free throws gave Georgia its first double-digit lead, 11, over the Gators 64-53. A Maten three and lay-up launched Georgia on the second of two separate nine point runs during the half. Florida foul trouble continued in the second, allowing Georgia to shoot 86.7 percent and accumulate 13 of the 35 points scored in the half from the line. Maten’s last free throw solidified the Georgia win 72-60 over Florida.

Tonight’s score mirrored last years result, 72-60, but with Georgia securing victory this year. Georgia is now 10 games away from tying the overall series record with Florida. The Bulldogs won the rebound battle, picking up 44 boards to Florida’s 35. Parker tied his season-high assists with three and Claxton tied his career-high blocks with three as well.

The Bulldogs return to action against Mississippi State on February 3, at 6:00 p.m. in Starkville.

• Georgia’s win over a ranked Gator team is the first since 2011-12 when the Bulldogs topped No. 11 Florida, 76-62. Florida has been ranked in the last four meetings.

• The victory marks Georgia’s fifth top-50 RPI win, tying Florida and LSU with the most in the conference.

• The SEC leader in field goal percentage defense (.387), Georgia, limited Florida to 36.5 percent from the floor – its second-lowest in conference play.

• Georgia’s defense held Florida, the SEC’s third highest scoring offense (80.7 ppg), to its lowest output in conference play. The previous low was 66 points vs. Kentucky. In total it was the Gators’ second-lowest scoring total by just one point.

• The Bulldogs’ last 12 points came from the free-throw line with Turtle Jackson and Jordan Harris with four each. UGA finished 18-for-22, while UF went 5-for-6.

• On the glass, Georgia edged Florida 44-35 to make it five games in a row the Bulldogs have outrebounded their opponent. Claxton finished one shy of career-high.

• Georgia now has four wins over teams that played in the 2017 NCAA Tournament (Florida, St. Mary’s, Winthrop and Marquette).

On tonight’s win…
“It was a team effort tonight and we have to credit our bench for lifting us up. Tyree gave us a big effort in the first half and Nic Claxton and Mike Edwards gave us big effort in the second half when Yante didn’t start the half that well. That really changed the momentum of the game, that and a great crowd combined for a key victory.”

On Nicolas Claxton’s performance and the team’s defense…
Nic’s length impacts the game defensively. He is so long and he gives us a presence to protect the rim and was one of the reasons our defense was so good. We just executed our scheme extremely well. (Florida’s scoring drought) That happens to teams when the home team is aggressive and confident, it becomes difficult to score and I was pleased with our defense.”

On how big this win was after the last three weeks…
“It was huge. Coach told us to trust the process, keep working hard every day and take it game by game. And we did it.”

On slowing Florida’s offensive run coming out of halftime…
“We learned from our mistakes. That’s all you can do is learn from your mistakes and try not to repeat them. That’s how you advance forward in life.”

On Tyree Crump’s minutes and the rest of the bench tonight…
“That got us the win tonight; It was our bench and all the other players. It was real spread out and everyone was doing a good job finding their shots and helping find their teammates shots.”

On getting a boost from the bench…
“I was off the first half and the rest of the team stepped up, and helped out. They helped me out when I was struggling and that’s what teammates are for.”

On having a potential height advantage when he’s out on the court…
“Yeah, but I just want the team to take good three’s in rhythm.”

On where he gets his energy from…
“That’s something I’ve always had and I continue to do that.”

On what the mood was like in the locker room after the win tonight…
“We just knew our backs were against the wall. We had to come out here and fight and give it everything we had. We knew we were on a losing course, we needed that win to boost our confidence and get back on the right track.”

On guys providing energy off the bench…
“We knew Yante’s shots weren’t falling and so we needed to bring some intensity and some scoring, and that’s what we did. “