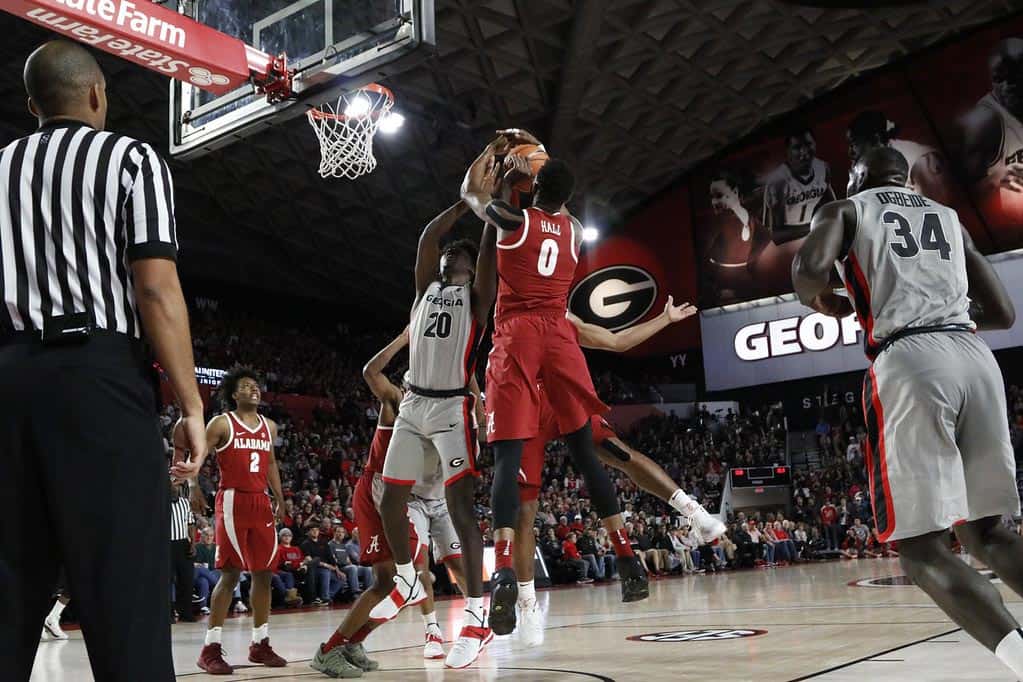 Athens, Ga. – A stifling defense and another 20-point performance from Yante Maten powered the Georgia Bulldogs past the Alabama Crimson Tide 65-46 Saturday afternoon to remain undefeated at home in a sold out Stegeman Coliseum.

Maten, a senior forward, scored 26 points contributing to his 14th consecutive double-digit point game and his seventh double-double of the season, two of which in conference play. Additionally, Maten had his best 3-point percentage of the season, 57.1 percent, shooting a career-high four for seven. Freshman forward Rayshaun Hammonds had his seventh career double-digit scoring game with 13.

“Yante is such a good player that most people are going to try and game plan to shut him down,” said Georgia head coach Mark Fox. “What the other guys have been able to do is play off of Yante and it’s created some other opportunities. The other night Juwan and Jordan had big scoring nights, tonight Rayshaun had a lot of open looks and it’s because of things that evolve off the defense that are designed to stop Yante. But Yante was so good today I’m not sure anything could’ve slowed him down. He was determined to play well and obviously we beat a very good team so we were proud of our team.”

The 19-point win margin is Georgia’s largest in the series since 1969-70, which was a 21-point Bulldog win in Athens. The Bulldogs’ defense held Alabama to a season-low in total points as well as its lowest point total for the first and second halves, individually.

Maten posted the first points of the game with a 3-pointer establishing the Georgia lead which was maintained for the entirely of the half. A pair of free throws from sophomore guard Jordan Harris gave the Bulldogs its first double-digit lead, 17-7, over Alabama (9-6, 1-2) at 11:46. A Maten 3-pointer set the Bulldogs on a 11 point run over the Crimson Tide at 8:00. A three from Hammonds in the last minute brought Georgia 22 points over Alabama, 41-19, followed by three shots at the line securing the 44-24 margin going into halftime. The Bulldogs scored their second highest number of points, 44, in the first half for this season.

Coming back to action, Alabama tipped in the ball but it was answered by two Maten dunks and one jumper. The Crimson Tide pushed back to get out of a 20 plus point deficit but only came as close as 16 points in the attempt to tie the game. Alabama foul trouble brought Georgia to the free throw line enabling the Bulldogs to shoot 16-of-21 for 76.2 percent. The last free throw by sophomore guard Tyree Crump with 37 seconds remaining cemented the 65-46 win over the Crimson Tide.

Harris posted a season high of six rebounds, junior guard William Turtle Jackson II posted a new career high of steals with four, and junior forward Derek Ogbeide tied his season high of blocks with three. The Bulldogs tie a season high of nine three’s, while holding the Crimson Tide to four. Georgia poured in eight 3-pointers in the first half alone.

The Georgia Bulldogs return to action at the University of Missouri in Columbia, at 9 p.m. on Wednesday, January 10.

On today’s win…
“Obviously a really good first half by our team today. I thought on both ends we played very well and were able to build a big lead versus a good Alabama team and then in the second half we probably didn’t play as maturely with a lead as we want but it’s a great win for us because we have a lot of respect for us and Alabama’s team and their talent and their coach so it’s a good win for Georgia.”

On rebounding…
“We didn’t rebound it well the past couple of games, and that’s something we’ve worked on in practice and spent a little time on and we had better results today.”

On what is clicking so well for the team…
“We’re just playing team basketball. No one really cares about stats. We play really well together. We are really good friends on and off the court. Everyone hangs out with each other, and this really builds up our chemistry.”

On how it felt doing well early and the effect on momentum….
“We think we were taking a lot of threes, but we were taking them. I think it was good shot selection. It was not out of play or someone’s characteristic 3-point shot. I think that really helped us because it was wide-open looks.”

On spreading the floor…
“[It] makes them be aware on the outside so it opens up a lot of space for Derek or Mike, who are really good on the inside. It is always good when you have someone who can play both positions, like [Nicolas] Claxton.”

On the turnout of the game…
“They brought a lot of energy. I would say it was like a sixth man out there helping us.”

On today’s rebounding…
“We were just really aggressive. We made sure we boxed out.”

On 3-point shooting…
“It is good. It stretched the floor for us. When your big man can hit the shots he can go inside and outside, having that is good.”

On the difference in ability to sustain the early lead…
“Just growing up as a team. We learned from our mistakes earlier from the year, and we grew up from them.”

On today’s defense…
“Just guard your man. Play your man and learn what he do. That was really it, just block your man.”