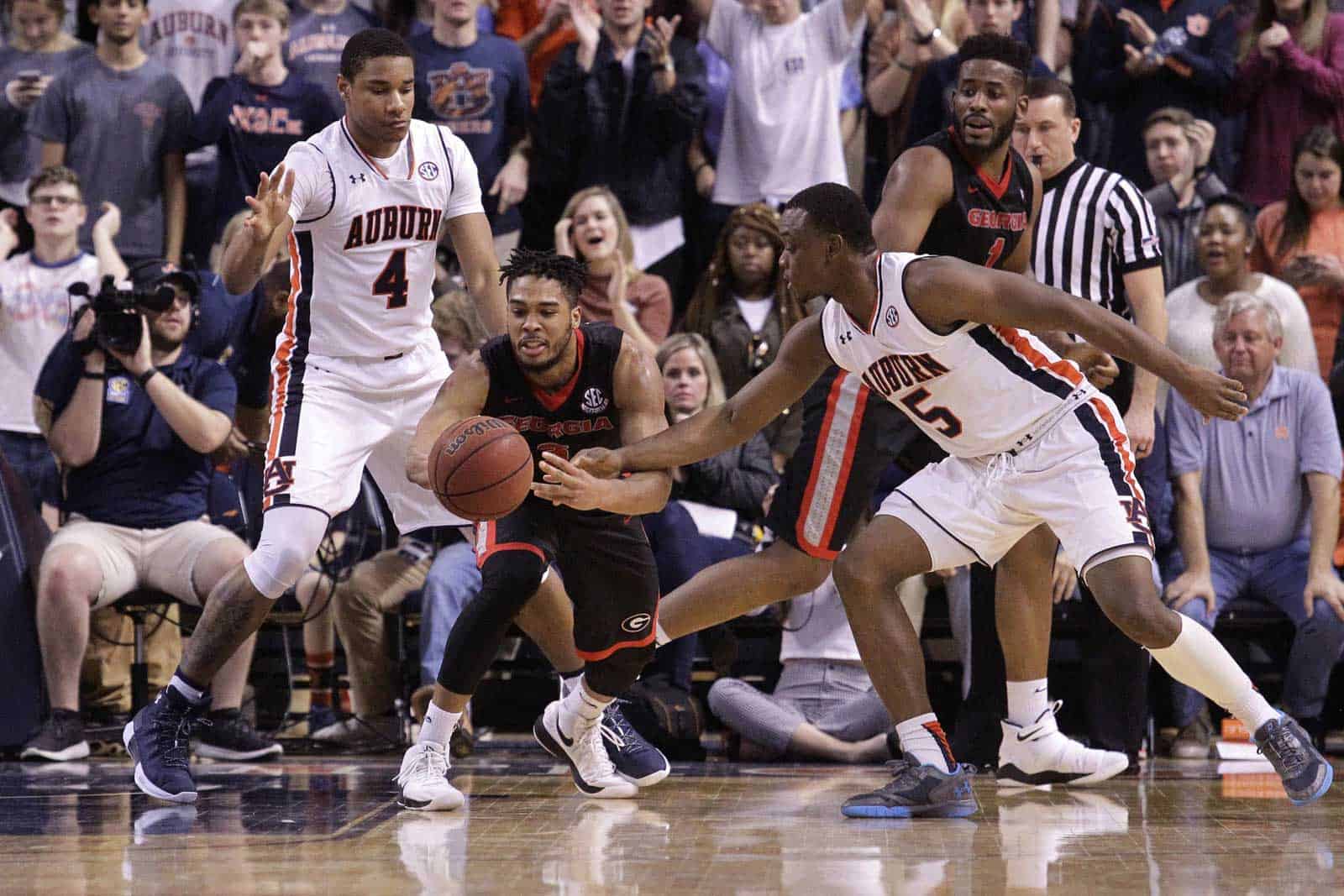 AUBURN, Ala. – With a 14-point lead at the end of the first half, the Georgia Bulldog basketball team could not withstand a second-half offensive burst from the No. 17/20 Auburn Tigers, as Georgia fell 79-65 on Saturday night at the Auburn Arena.

“We played very sound in half number one,” Georgia head coach Mark Fox said. “I thought our defense just collapsed at the start of the second half. We gave them momentum, and we just couldn’t stop it. We eventually did, and we got back in a position to make a couple plays to win. Now we have to regroup and get ready for Arkansas.”

Georgia separated itself by 14 points by the end of the half, the largest deficit the Tigers have faced at the end of the first half this season. The top-ranked Bulldog defense also held the Tigers to a 25 percent shooting clip from the field, while the Georgia offense shot 56 percent. The Bulldogs also dominated in the paint in the first half, scoring 14 points compared to Auburn’s four.

Auburn struck first with a couple free throws, but Georgia quickly secured the lead with a 9-2 run, featuring junior forward Derek Ogbeide and redshirt senior Juwan Parker, whose 3-pointer provided a 9-4 Bulldog margin at the 15:43 mark.

The Tigers evened the contest at nine, and the two teams traded points back-and-forth until a pair of defensive stands allowed seven unanswered Georgia points. Sophomore guard Tyree Crump produced five quick points off the bench, including a 3-pointer, followed by buckets from Parker and senior forward Yante Maten for the 23-15 edge.

Georgia closed out the half with a 17-6 run, featuring seven points from the charity line, including five from Maten. Parker capped the Georgia scoring parade with a pair of 3-pointers and led all scorers with 13 points at the end of the 40-24 opening frame.

Auburn reversed the tale in the second half, taking its first lead since the opening minute of the game at the 13:45 mark with a Mustapha Heron dunk for the 43-42 edge over the Bulldogs. The Tigers continued to establish themselves on offense throughout the half, separating themselves by as many as 13 points.

Georgia cut the Tiger lead to five with Parker’s career-tying fourth 3-pointer, which capped a 14-5 Bulldog run. The Auburn offense continued to surge to close the half, sealing the 79-65 final.

Maten led Georgia with 17 points and nine rebounds. The Pontiac, Michigan native has scored in double-digits in all but one game this season. Parker followed, producing 16 points and matching a career-high with four 3-pointers. The redshirt senior shot 50 percent from the field. Freshman Rayshaun Hammonds also registered double-digits on offense with 10 points.

Next up, Georgia welcomes Arkansas to Stegeman Coliseum for a mid-week contest on Tuesday. The game will be available on SEC Network at 6:30 p.m.