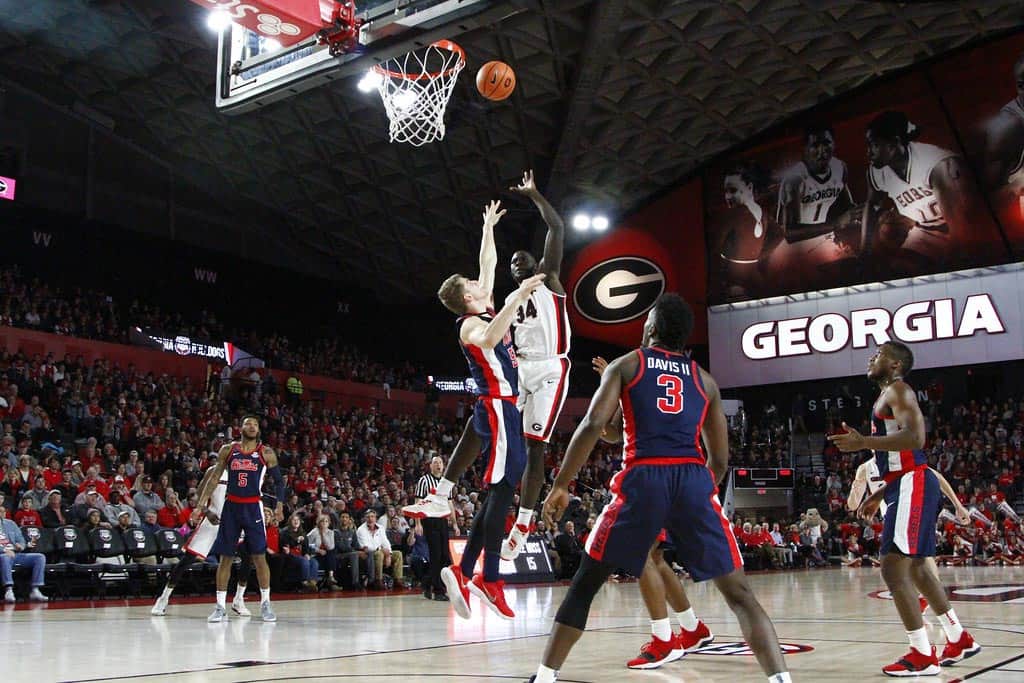 Senior guard Juwan Parker had his first career double-double, leading the team with career-high points (18) and career-tying rebounds (11). The native of Tulsa, Oklahoma, Parker shot a perfect 3-point game (4-for-4), which is also a career-high, bringing his season average to 36.8 percent.

“Our bench was really good to us tonight, Juwan and Jordan came in and were terrific,” said head coach Mark Fox. “It can’t always be just Yante so it’s nice to win a game when he doesn’t have to do all the work. Our bench is the key to winning. I thought Turtle didn’t play necessarily well and Yante didn’t get the looks in the second half, we needed some guys off the bench. Our bench was key for us, it’s one of the things we feel is a strength of our team and Juwan obviously was very good tonight.”

Senior forward Yante Maten posted his 13th consecutive double-digit game with 15, while both junior forward Derek Ogbeide and sophomore guard Jordan Harris bested their season-highs in points with 14 and 12 respectively.

Ogbeide put the first points on the board which were answered by an Ole Miss (8-6, 1-1) 3-pointer. The Rebels had the advantage until Ogbeide countered with a jam in the 14th minute, tying the score at eight. Ole Miss fought back for the 11-10 lead but were cut short by a jumper from Harris. Followed by a tipin from Maten, the Bulldogs surged ahead, claiming an eight point lead from an Ogbeide jumper and free throw.

Ole Miss regained the lead, but Maten answered with a tipin and a free throw bringing the Bulldogs back on top 26-24. Georgia closed out the first half with a 16-7 run, featuring a jam from junior forward E’Torrion Wildrige, a three from Harris and 11 Maten points, securing the 39-31 lead going into halftime.

Georgia kept the momentum going in the second half with a three from junior guard William Turtle Jackson II and did not allow the Rebels to come within six points of the Bulldog lead. With 13:26 remaining in the game, Parker went on a tear, scoring 12 of the next 14 Georgia points to record a season high in points. The Bulldogs had a 10-point plus advantage on the Rebels for larger part of the half.

A free throw from Maten gave the Bulldogs their largest margin of 16 points with less than five minutes remaining. Parker banked a three in the last minute to bring the game to 71-60 and secured his career-high in points, as well as the 71-60 Georgia win.

The Bulldogs return to action in Stegeman Coliseum on Saturday, January 6, at 12 p.m. against Alabama.

• Georgia remains undefeated at Stegeman Coliseum this year at 7-0. In the Ole Miss series, the Bulldogs improved to 73-42 overall (41-12 in Athens) including each of the last three meetings.

• The Bulldogs limited the Rebels to 6-of-26 from three-point territory for a season-low 23.1-percent. Entering the contest, Ole Miss were fourth in the SEC with 9.1 threes per game and 10.2 in the last five games.

• For the seventh straight game, Georgia had a positive assist-to-turnover ratio as the Bulldogs had 16 assists and 12 turnovers. Ole Miss had just its second negative such ratio of the season with a season-low six assists and 10 turnovers.

• Georgia held Ole Miss to its second-lowest scoring output of the season, two away from its lowest. The Rebels came in averaging 81.8 points per game.

• Career-night for redshirt senior Juwan Parker as he notched his first-ever double-double on 18 points and 11 rebounds, each a career-high. The guard entered the game 3-for-15 from three and hit 4-for-4, again a career-best.

• Yante Maten finished 5-for-7 from the free-throw line, joining Georgia’s exclusive five-person group of 400 career free throws made and past J.J. Frazier and Vern Fleming in free throws attempts to No. 6 (536).

On tonight’s win…
“Tonight was a hard fought SEC game. I felt that guarding the three point line was going to be important and we were able to do that. I feel fortunate to beat a team that was playing very well coming in here, and Coach Kennedy always has really good teams and been very successful in this league so we feel fortunate with the win.”

On his team’s defensive performance…
“They’ve been making over 10 three’s a ball game, averaging 31 points per game from the 3-point line and that was one of our keys to the game, we cannot let them make three point shots. They only got six out of 26 attempts so we were pleased with our 3-point defense, there was one we weren’t happy about but for the most part we did a pretty good job there.”

On what was going through his head in the second half…
“I just got hot. Guys like Yante and Turtle kept looking to find me, and I just kept shooting. I got hot.”

On Ole Miss’s struggles from the 3-point line…
“That was part of the game plan. We knew they were a great 3-point shooting team coming out. We knew that was one of their main weapons. We worked all week to try to put that away.”

On mindset after the Kentucky game…
“Just come out and execute. With SEC play, we have a game every three or four days. So [we] just flush it and moving on to the next one. After tonight, we will flush this one and move on to the next one.”

On coming back from Kentucky…
“Any win after a loss is a great bounce back for us. I’m glad we got a win.”

On the team dynamic…
“We have to make sure we ended tonight with one-on-one in SEC play, and that’s what we did tonight. We all contributed in our own way and I’m really proud of the boys tonight. Our bench came out strong and played really well tonight. Juwan found gaps in the defense in the zone, they were really congested, so we just tried to move around as much as possible. He found the open shots and played a really good game. On offense we knew would be going against bigs and we just tried to out-play them and push past them physicality wise.”