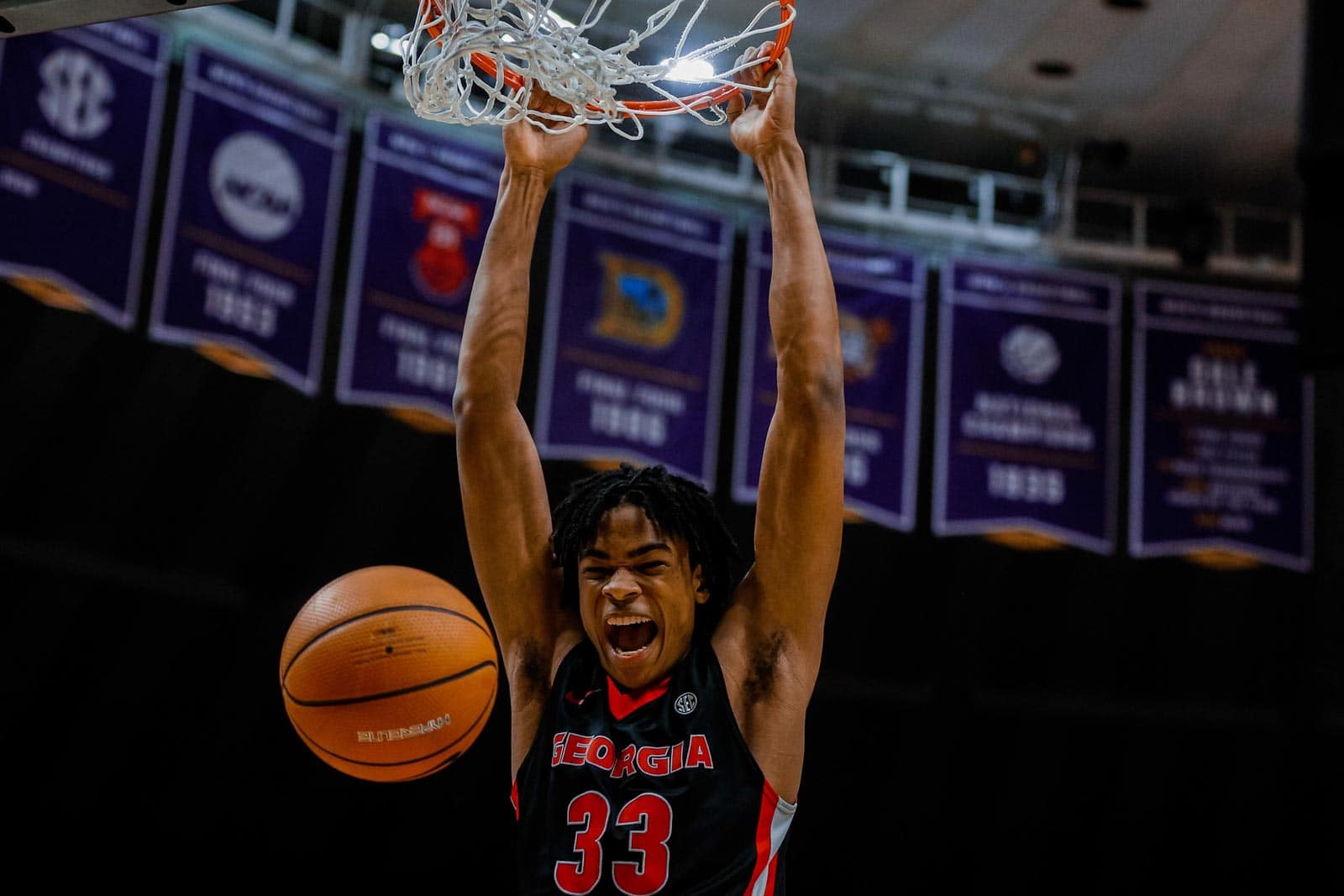 BATON ROUGE, La. – A second-half surge led the Georgia Bulldogs basketball team to a 61-60 victory over the Louisiana State Tigers in the last five seconds of regulation at the Pete Maravich Assembly Center on Tuesday night.

Trailing by two points with 1:18 remaining in the game, freshman guard Teshaun Hightower snagged a steal and sprinted to the basket, before he was intentionally fouled. The ball remained in Georgia hands after Hightower took a trip to the charity line, and redshirt senior guard Juwan Parker drained a 3-pointer from the top of the key to hand Georgia the temporary 59-58 margin.

After LSU sophomore forward Duop Reath hit a jumper for the one-point Tiger lead, Parker secured an offensive rebound with 23 seconds remaining to keep the Bulldogs in possession. Following a Georgia timeout, junior guard Turtle Jackson found senior forward Yante Maten, who fought to the basket for a layup and the 61-60 win.

Maten paced the Bulldogs with his eighth double-double of the season and ninth 20-point performance. The league-leader in scoring provided 21 points, 12 rebounds, and three blocks, with a 7-for-7 clip from the free throw line.

Junior forward Derek Ogbeide controlled the Georgia attack in the first half, leading all-scorers with nine points in 20 minutes, on the way to his fifth double-digit scoring outing of the season (11.). After a Hightower 3-pointer, who logged a career-high eight points, the Bulldogs broke through a full-court press, with Jackson finding Ogbeide at the basket for the go-ahead 7-5 layup. Following another Hightower bucket at the 14:38 mark, Ogbeide collected all seven of Georgia’s next points, diminishing a 10-2 LSU run and cutting the Tiger edge to three.

Maten provided a jumper and his own tipin with a little over two minutes remaining in the first frame, but LSU distanced itself to a 34-24 advantage.

To open the half, Georgia swiftly responded with a 14-3 run, stopping the LSU offense on four-straight possessions while scoring eight unanswered points, featuring a pair of buckets from both Maten and Parker. Trailing one point at the 14:59 mark, Maten supplied a three-point play from a layup and a free throw to knot the game for the first time since the opening half at 37. A Hightower free throw made it 38-37.

“We just made a couple adjustments at the half, and talked about getting back to playing like the team that we were earlier in the year,” Fox said. “We finally calmed down.”​

After a Jackson 3-pointer tied the game at 41, sophomore guard Jordan Harris followed it up with a 3-pointer to provide the 44-41 Georgia lead. LSU jumped back in with three consecutive buckets, as the two teams traded points back-and-forth for the remaining minutes, combining for a total of 16 lead changes and eight tied scores by the end of the game.

Next up, the Bulldogs continue play on the road on Saturday against the Auburn Tigers, the top team in the conference. The game will be available on SEC Network at 6 p.m.