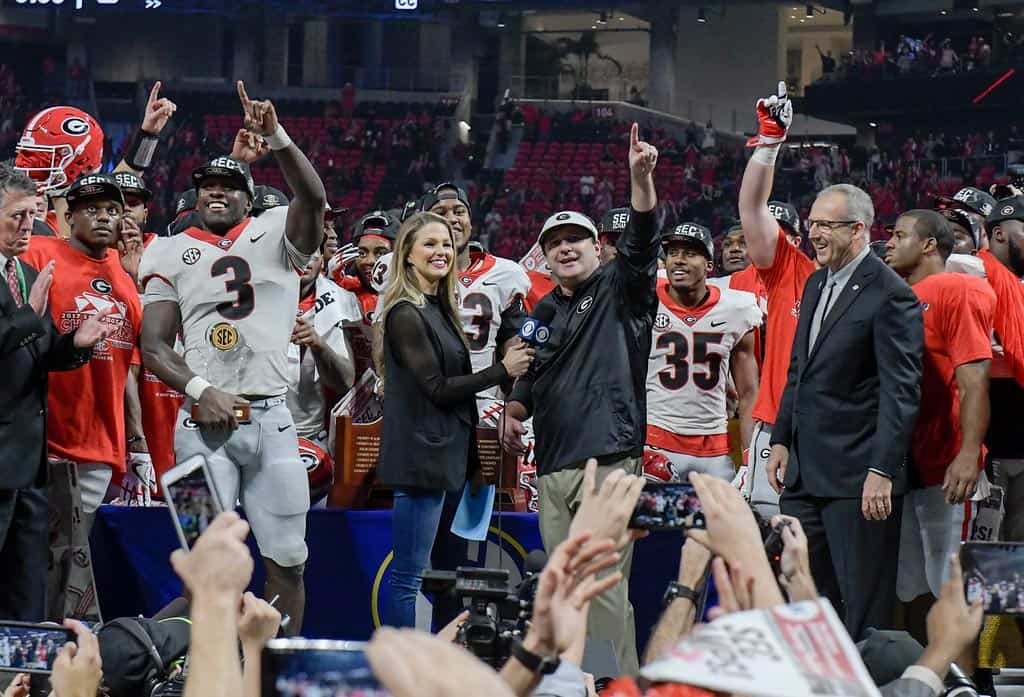 WACO, Texas – Georgia’s Kirby Smart and Saint Francis’ (Ind.) Kevin Donley highlight today’s announcement of the American Football Coaches Association’s 2017 Regional Coach of the Year winners. These winners will be honored at the American Football Coaches Awards, presented by Amway, broadcast live on the USA TODAY Sports Facebook page on Tuesday, Jan. 9, 2018, at 8 p.m. EST. The awards show will air from the Crown Ballroom at the Charlotte Convention Center during the 2018 AFCA Convention.

Smart earned his first AFCA Regional Coach of the Year honor by guiding Georgia to a 12-1 record, the Southeastern Conference title and an appearance in the College Football Playoff. In his two seasons as a head coach, Smart has an overall record of 20-6 and has led the Bulldogs to bowl games each season. Donley earned his fourth AFCA Regional honor and third straight after guiding Saint Francis to a 13-0 record, the Mid-States Football Association Mideast title and a second straight trip to the NAIA National Championship game. He has an overall record of 315-129-1 in 39 years as a head coach, and a record of 201-44 in 20 seasons leading the Cougars. Donley is the winningest head coach in NAIA history.

Brian Bohannon of Kennesaw State University for tied AFCA Regional Coach of the Year in the Football Championship Subdivision Region 2. Bohannon was a receiver for Georgia from 1990-93.

Award History: The AFCA began recognizing district coaches of the year following the 1960 season. The awards were established the same year Eastman Kodak agreed to sponsor the AFCA Coach of the Year award. Prior to 1960, the Scripps-Howard newspaper chain had sponsored the program, which recognized one national Coach of the Year.

The AFCA first recognized eight district winners in each of two divisions: university and college. In 1972, a ninth district was added in each division. In 1983, the award was changed to recognize regional winners instead of district winners. The number of divisions was also increased from two to four and five regional winners were selected in each division. This resulted in a more equitable selection process and better represented the make-up of the membership. At the same time, the new system increased the number of honorees from 18 to 20. In 2006, the AFCA Division II Award was split into separate Division II and NAIA divisions, giving us the 25 winners we now recognize.

Consecutive Years: Mount Union’s Larry Kehres is the only coach to win district/regional honors in seven consecutive years, winning in Division III from 2006-12. Northwest Missouri State’s Mel Tjeerdsma and Nebraska’s Bob Devaney are the only coaches to win district/regional honors in five consecutive years. Tjeerdsma earned the honor in Division II from 1996-2000. Devaney earned the honor in the AFCA’s old University Division (1962-66). Jacksonville State’s John Grass and Morningside’s Steve Ryan join Carroll’s Mike Van Diest, Trinity’s (Texas) Steve Mohr, North Dakota State’s Ron Erhardt and Kehres as the only men to win the award four years in a row. Grass earned his four straight in FCS from 2014-17, while Ryan got his in NAIA, also from 2014-17. Van Diest earned the honor in NAIA from 2007-10, while Kehres won his four in a row from 1999-2002 in Division III. Erhardt earned district honors in the AFCA’s old College Division (1967-68-69-70) wh