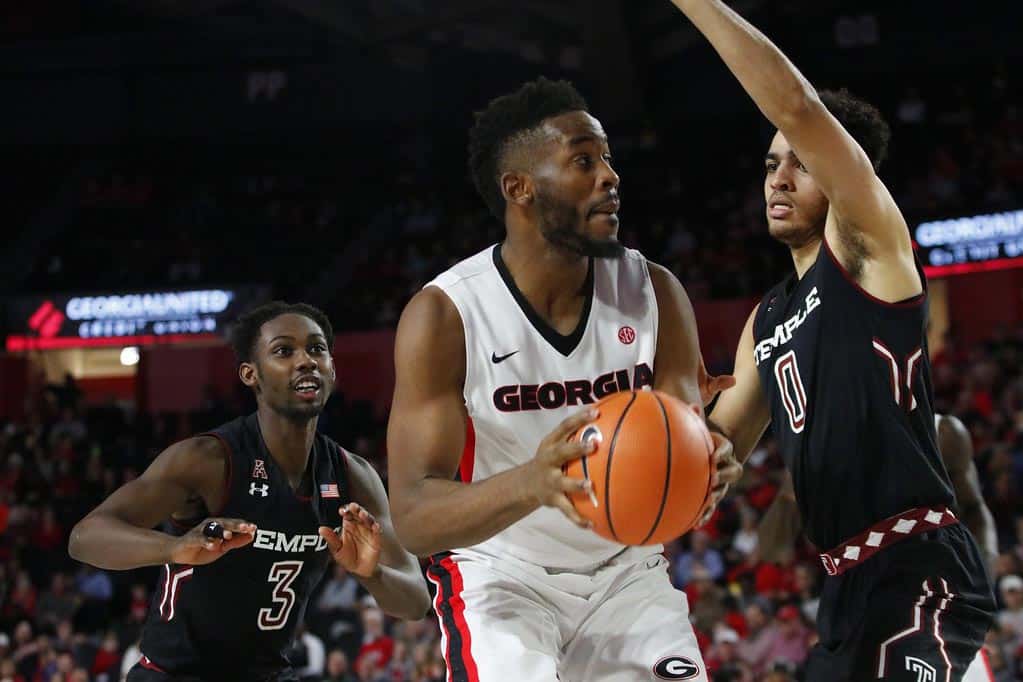 Maten logged his fifth double-double of 2017-18 with a season-high 30 points, his first 30-point game on the year and fifth of his career, to help Georgia remain undefeated at home (6-0) this season.

“I tried to find my sweet spots,” Maten said. “I started out kind of slow but then I ended up finding my rhythm offensively and made sure I made the most of my opportunities and put my teammates in a better spot.”

The Pontiac native was joined in double digits for the first time by Claxton, who notched career highs in points (14) and rebounds (9). Junior guard Turtle Jackson chipped in 10 for his ninth double-digit scoring output of the season.

The Owls (7-4) entered the game with one of the better résumés of a Georgia opponent this season. Temple checked in at No. 12 in the Tuesday edition of the RPI, with the nation’s No. 4 strength of schedule to boot. The win marks the Bulldogs’ third victory over top 75 RPI teams (No. 56 Saint Mary’s, No. 73 Marquette)
this season.

The game began as a defensive battle, with the Bulldogs and Owls combining for 22 points in the first 10 minutes. Temple made its first shot, a 3-pointer by Obi Enechionyia, but Georgia held the Owls to 8 of 26 shooting by halftime and Temple’s largest first half deficit of the season.

Locked in a stalemate at 7-7 after the first six minutes of play, Georgia’s interior players kicked into gear. After missing his first three shots, Maten scored a tipin and drilled a jumper to give the Bulldogs their first lead of the contest. Those buckets spurred a 14-2 run in the middle of the first half as Maten
heated up for 15 first half points.

Junior forward Derek Ogbeide joined the action, scoring back-to-back buckets inside capped by an emphatic interior dunk. Claxton closed out the period with a gentle tip-in as the buzzer sounded for a 42-23 lead. All told, Georgia’s frontcourt poured in 29 of the Bulldogs’ 42 at the break and 57 of the team’s 84
final points.

“One of the things we have the luxury of is we have a lot of inside players,” Georgia head coach Mark Fox said. “We only took five or six 3-point shots in the first half because we wanted to go inside. Their big guy fouled out so they didn’t have a lot of inside presence so we had the advantage tonight in that
situation and we were able to turn that into free throw opportunities.”

Georgia continued to attack Temple inside, particularly by way of the foul line. After not attempting a free throw for the first 11:27 of play, Maten keyed the team towards a 10-12 performance from the charity stripe in the first half. The Bulldogs extended their foul line success to a season-high 28 for 39 by
the game’s end while the Owls shot a season-low 4 for 13.

Though Temple came out in the second half to the tune of 8-15 shooting behind the 3-point arc, the Bulldogs never surrendered their double-digit lead and won by a final of 84-66.

The Bulldogs return to action on New Year’s Eve — Sunday, December 31 — against the Kentucky Wildcats at Rupp Arena to open Southeastern Conference play. Tipoff is set for 6:00 p.m. ET on ESPN.

• The Bulldogs evened up the all-time series against Temple at 2-2. Entering the contest, Temple was ranked No. 12 in RPI – the highest among Bulldog opponents.

• Georgia’s 18-point win over Temple was the Owl’s largest loss margin this season as two losses were decided by four points and one by 10.

• Georgia took advantage of its opportunites at the foul line, going 28-for-39 which is a season-best in makes and attempts. Senior forward Yante Maten (12-17) and freshman Nicolas Claxton (6-10) notched career bests in FTM and FTA at the line.

• At the half, Georgia led 42-23, marking Temple’s largest halftime deficit this season. Temple trailed by 17 against top-ranked Villanova. The Owls shot a season-low 30.8-percent in the first half, while the Bulldogs shot 51.7-percent from the floor.

• The 9-2 Bulldog start matches the best beginning during Mark Fox’s tenure in Athens.

• The Bulldogs edged the Owls in bench points (31-15), the eighth time Georgia has outscored the opponents’ bench this season.

On attacking the paint against Temple…
“One of the things we have the luxury of is we have a lot of inside players. We only took five or six three-point shots in the first half because we wanted to go inside. Their big guy fouled out so they didn’t have a lot of inside presence so we had the advantage tonight in that situation and we were able to turn that into free throw opportunities.”

On only committing nine turnovers…
“We’ve learned how to take care of the basketball and play with a little more discipline offensively, we know where to take the ball. We have more of our playbook implemented so we are getting more and more comfortable offensively as you do throughout the season.

On his 30-point outing and what was working for him…
“I tried to find my sweet spots. I started out kind of slow but then I ended up finding my rhythm offensively and made sure I made the most of my opportunities and put my teammates in a better spot.”

On his performance…
“It felt great, it built my confidence up. Every game I feel like I’m going to have a big role and I feel like I can use my length to effect the game. We just tried to dominate the game inside and out and it obviously worked out pretty good for us.”