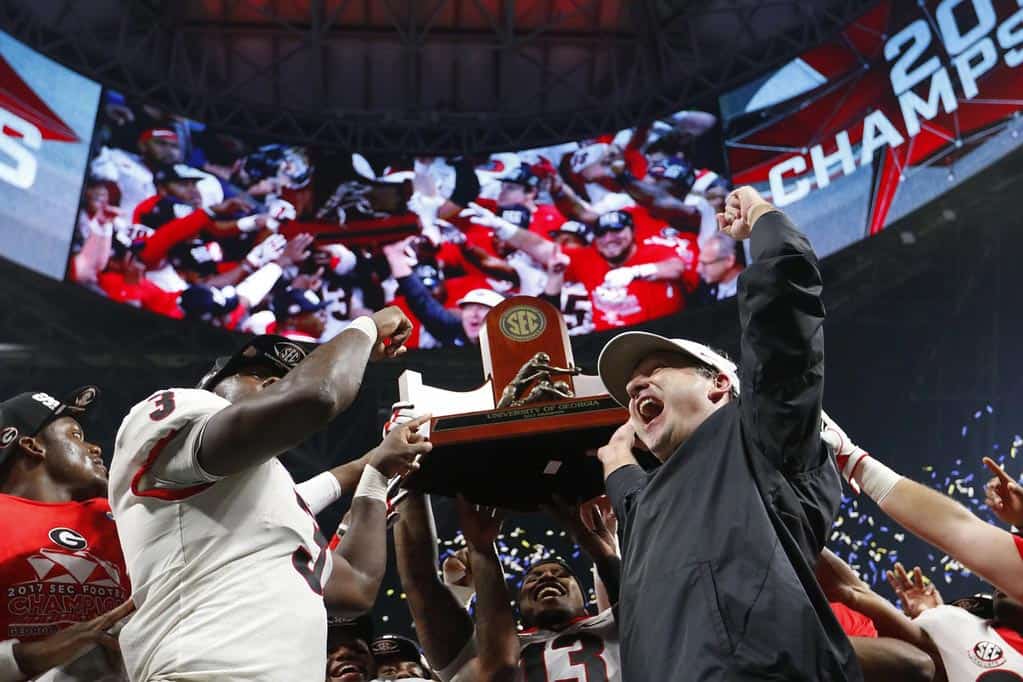 ATHENS, Ga. – The Southeastern Conference champion Georgia Bulldogs are in the College Football Playoffs and will play second-ranked Oklahoma in the Rose Bowl on Jan. 1, 2018 in Pasadena, California.

Kickoff for the CFP semifinal game at the Rose Bowl presented by Northwestern Mutual between the third-ranked Bulldogs (12-1) and the Big 12 champion Sooners (12-1) will be at 5:10 p.m. ET and be televised on ESPN. This will be the first-ever meeting between the programs.

In Georgia’s only previous appearance in the Rose Bowl Game, the Bulldogs defeated UCLA, 9-0, on Jan. 1, 1943. The win resulted in a national championship for the Red and Black. The other CFP semifinal will feature top-ranked Clemson (12-1) versus fourth-ranked Alabama (11-1) in the Sugar Bowl on Jan. 1 in New Orleans. The winners of the CFP semifinal will meet for the national championship on Jan. 8 in Atlanta at Mercedes-Benz Stadium.

“I couldn’t be more excited for our team and especially our seniors with the selection of our team to participate in the College Football Playoff,” said UGA head coach Kirby Smart. “This is certainly a goal of every college football team, coach and player and we are extremely honored. It also presents a great opportunity for our fans who have been so supportive of our team throughout the season. Playing in a venue with such rich tradition will be a rewarding experience and it represents another step for our team and program. It also represents a great challenge playing a team like Oklahoma who has proven to be one of the country’s most accomplished programs in college football history.”

“We are delighted with the selection of our team to represent the Southeastern Conference in the College Football Playoff,” said UGA J. Reid Parker Director of Athletics Greg McGarity. “It will be a completely new experience for most of our coaches and all of our players and fans. Our last, and only, appearance in the Rose Bowl Game was January, 1943—more than 70 years ago. This is just an extremely gratifying opportunity and we are so excited for our fans. Playing in the Rose Bowl against such a quality team and program will be a memorable experience.”

This will be Georgia’s 53rd bowl game appearance—fourth most of any team in the country. The Bulldogs’ all-time bowl record is 30-19-3. Georgia is making its 21st consecutive bowl appearance, which ranks as the third longest active streak in the country.

Georgia’s senior class is 40-12 in their career with three bowl wins (Belk, TaxSlayer and AutoZone Liberty). The 2017 Bulldogs defeated second-ranked Auburn 28-7 in the SEC Championship Game in Atlanta this past Saturday. This will be Oklahoma’s second appearance in the College Football Playoff in the past three years. The Sooners won their third straight Big 12 title with a 41-17 win over No. 11 TCU this past Saturday.