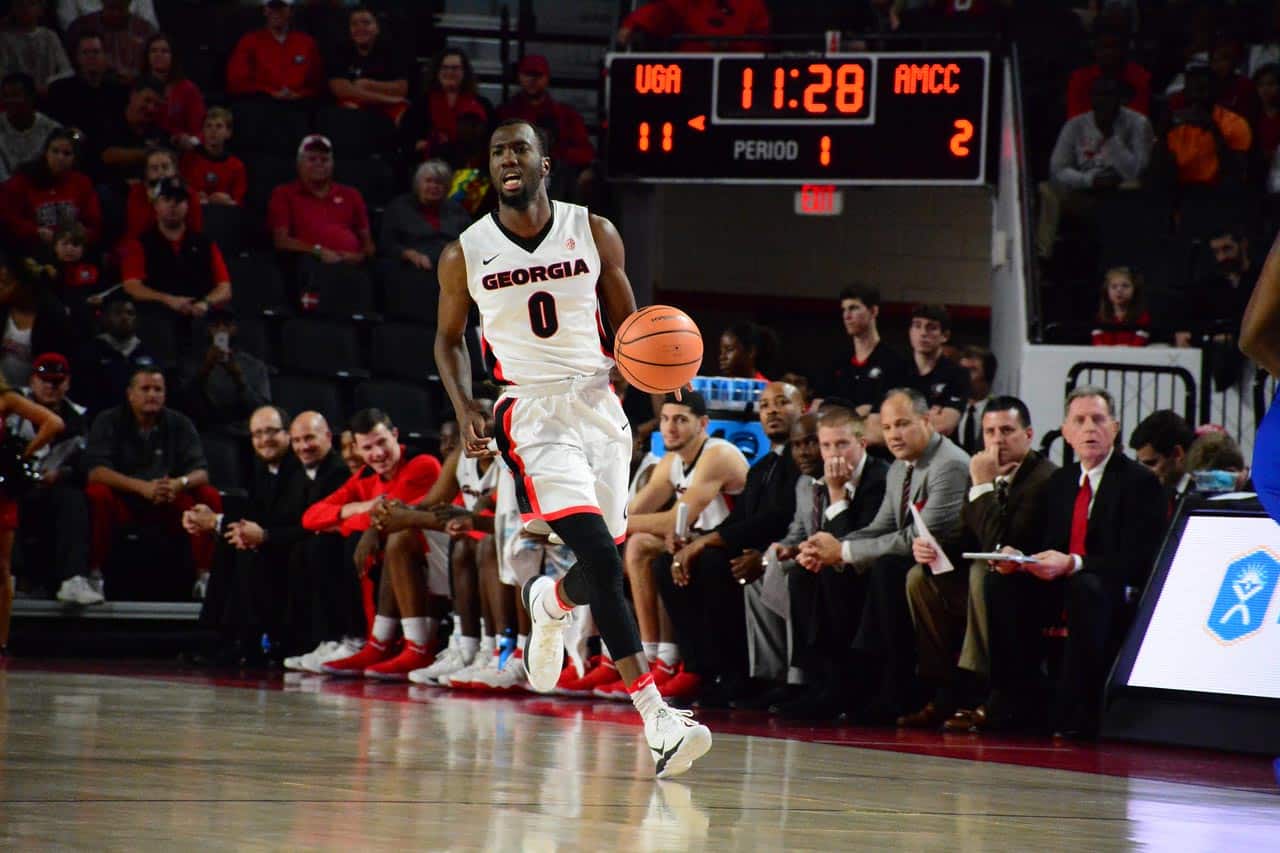 MILWAUKEE, Wis. – A collective effort by the Georgia men’s basketball team propelled the Bulldogs past the Marquette Golden Eagles 73-66 Saturday at the Bradley Center.

The key moment in the second half came at the 1:15 mark with Georgia leading by two points and Marquette with the ball. Marquette guard Andrew Rowsey drove to the hole but freshman Rayshaun Hammonds stuck his hand in and caused a jump ball, which gave Georgia the possession. On the other end, Yante Maten made a bucket in the paint and was fouled which he turned into a three-point play and a five-point Bulldogs lead. The Golden Eagles got it as close as three points with 33 seconds left but Georgia iced the game at the line making four free throws.

“It was a great win for our young people,” Georgia head coach Mark Fox said. “I thought we competed against a very good team in a very adverse environment. It was a 40-minute game for sure, and we had a lot of guys chip in and make plays.”

Georgia improved to 6-1 on the year, while Marquette dropped to 5-3. Nine different Bulldogs scored at least five points with three of which grabbing at least five rebounds as well. Maten led the charge with a team-high 13 points and added seven boards. Junior guard William Jackson II tallied 11 points and a career-high seven assists.

“We knew they would make their share of baskets,” Fox added. “And you’ve got to be able to play through other people’s runs and have enough poise to withstand their runs, and have enough execution to answer them. I thought we tonight we had both.”

It took several minutes into the game before either team found a rhythm and it was the Bulldogs who found theirs first. Sophomore guard Tyree Crump ignited Georgia with a three-pointer to tie the game at 8-all. Later, a double-teamed Maten threw a cross-court pass to Crump who shook his first defender with a pump fake and sunk his second three of the half. Georgia led by as many as eight before Marquette matched the Bulldogs play and eventually took a short lead at 28-27.

After Maten notched the game at 28-all, Rowsey hit a three, his second in a row, for what appeared to be a 3-point lead heading into half. However, freshman Nicolas Claxton stroked a three as time expired to head into the break tied at 31-all.

The first points of the second half came from the free throw line by Juwan Parker who smartly drew a foul on an airborne Golden Eagle. Parker’s two first-half points came on an identical play.

Georgia rallied off six scoreless points on a Maten dunk in transition and buckets in the paint from Hammonds and Mike Edwards. After a Marquette timeout and empty possession, Edwards dunked to make it eight in a row, which gave the Bulldogs a 43-36 lead at the 12:38 mark.

The Golden Eagles captured the lead off a Rowsey three at 48-47 just under the 10-minute mark. The game exchanged leads six times and was tied once in the next five minutes.

The Bulldogs obtained their final lead, 56-55, at the 5:08 mark off a long jumper in the corner by Maten. Hammonds followed with a reverse lay up then fellow freshman Tashaun Hightower made two free throws for a the 5-point Georgia advantage. Marquette cut it to a 2-point game off of Rowsey’s free throws at the 1:51 mark, but it was the subsequent Golden Eagle possession when Hammonds got the critical jump ball call.

Marquette finished 11-for-33 from 3-point territory. Rowsey, who led the NCAA in 3-point shooting last season, was 3-of-9 for threes and finished with 15 points.

Georgia returns to Athens to play host to the Winthrop Eagles Tuesday. The tip is scheduled for 7 p.m. and will be aired on SEC Network.