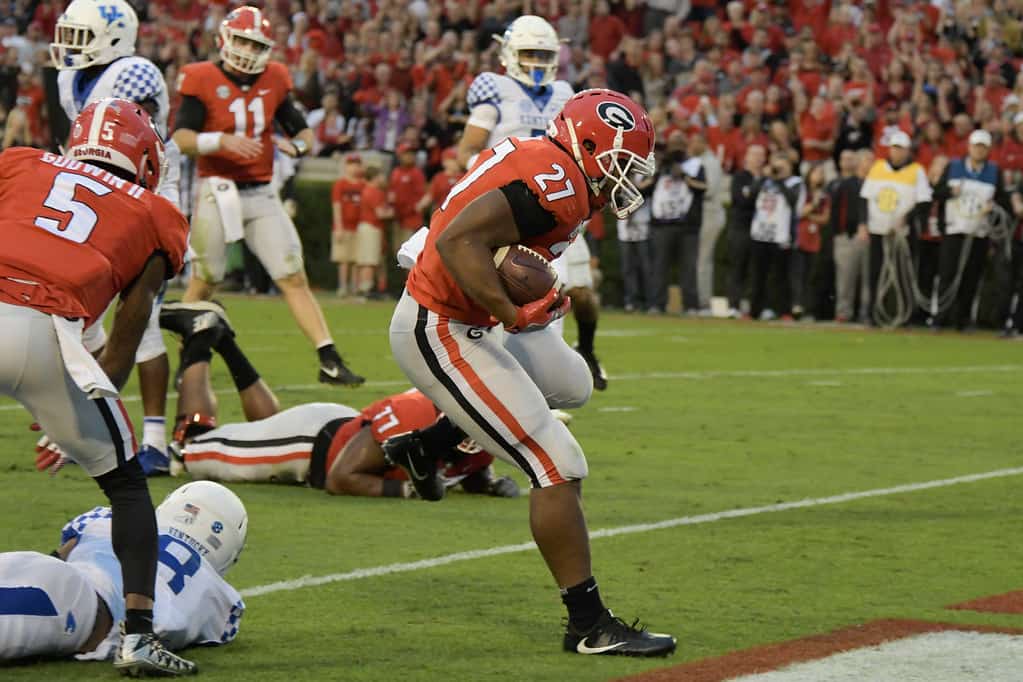 ATHENS, Ga. – Senior running backs Nick Chubb and Sony Michel combined for 238 yards and five touchdowns to lead the seventh-ranked Georgia Bulldogs to a 42-13 win against Kentucky in the 2017 home finale at Sanford Stadium Saturday evening.

The Southeastern Conference Eastern Division champion Bulldogs improve to 10-1 overall and 7-1 in the SEC. This squad also became the first Georgia team to go undefeated in a season against the rest of the SEC East with a perfect 6-0 mark.

With Saturday’s win on Senior Day, the current Georgia senior class improved to 38-12 in their careers, including an unblemished record at home this season.

“What a great way for these seniors to go out – winning the SEC East by going undefeated against the East,” head coach Kirby Smart said. “Our seniors have given us tremendous leadership, and I’m happy and proud of them. Our seniors have set the standard and our young players have bought in. It helps to have such great leadership.”

Freshman quarterback Jake Fromm threw an interception on Georgia’s first possession of the game, setting the Wildcats up deep in Bulldog territory. Kentucky capitalized on the opportunity with a 37-yard field goal from Austin MacGinnis.

The Bulldogs could get nothing going on their next offensive series, until Kentucky roughed punter Cameron Nizialek to give Georgia a fresh pair of downs at its own 34-yard line. Fromm marched his team down the field on a 12-play, 75 yard drive capped off by an eight-yard touchdown rush by Chubb.

Blake Bone hauled in a 45-yard pass on UK’s next possession to set up another field goal — this time a 35-yarder form MacGinnis to put the score at 7-6 in the Bulldogs’ favor at the end of the first quarter.

Georgia’s offense started clicking in the second quarter as the Bulldogs put together two scoring drives to take a 21-6 lead at the half. One score came through the air and the other on the ground when Javon Wims caught a 27-yard TD pass from Fromm and Michel bounced it outside for a 37-yard TD rush.

Kentucky’s eight-play, 75-yard scoring drive to open the third quarter made it a one possession game as Benny Snell Jr. knocked it in from one-yard out to put the score at 21-13. It took just six plays on Georgia’s next drive for the Bulldogs to get back on the scoreboard. A 21-yard Chubb rush set his team up deep in UK territory as Michel capped off the drive with an eight-yard touchdown.

Chubb was not done. The Bulldog senior surged over left tackle to start the fourth quarter and raced 55 yards down the field to put him over 1,000 yards for the season as Georgia went up 35-13.

Michel added another touchdown early in the fourth quarter and the Bulldogs left Sanford Stadium with a 42-13 victory.

Georgia now heads to Atlanta to close out the regular season against Georgia Tech next Saturday.

*Monumental Home Finale: With the 42-13 win over Kentucky, the SEC Eastern Division champion Bulldogs became the first UGA team to go undefeated in a season against the SEC East (6-0) since the league split into divisions in 1992.  Georgia also became the first team to go undefeated in Sanford Stadium (6-0) in a season since 2012. Thirty-one Bulldog seniors were recognized prior to kickoff, and with today’s win, this class improved to 38-12 in their career.  With the latest win over UK, Georgia holds a series edge of 57-12-2.

*Balanced Attack: During their final game between the hedges, senior tailbacks Nick Chubb and Sony Michel combined for five touchdowns and 238 rushing yards in the win over Kentucky.  Chubb became only the second Bulldog running back in history (Herschel Walker) to rush for 1,000 or more yards in three different seasons after finishing with 15 carries for 151 yards, including scoring runs of eight and a season-long 55 yards.  His touchdowns give him 45 TDs in his career (team-leading 12th of the year), moving him to second behind Herschel Walker (52).  Chubb has now scored two touchdowns in a game 14 times and gone over the 100-yard mark 23 times in his career. At this point in the season, Chubb has rushed for 1,045 yards.

The Bulldogs finished with 504 total yards (381 rushing, 123 passing) and scored 42 points.  Michel put Georgia up 21-6 at the 1:51 mark in the second quarter on a 37-yard touchdown run.  He finished with 87 yards on 12 carries and three scores.  Michel last rushed for three touchdowns in a game as a freshman versus Troy.  He stands tied for fifth on Georgia’s all-time all-purpose yards with 3,834 yards.  Michel’s first scoring run came at the end of a 12-play, 75-yard drive that lasted 6:21, which is Georgia’s longest TD drive of the year.

Freshman QB Jake Fromm completed the game 9-for-14 for 123 yards with a touchdown and an interception and 18 yards rushing, including a career-long 21-yarder.  Senior WR Javon Wims led the Bulldogs’ receiving attack with a career-high six catches for 83 yards and a score.  Wims is now tied for the team lead with junior WR Terry Godwin with five touchdown catches this season.

*Dog ‘D’: The Georgia defense held Kentucky to just six points on two field goals and 140 yards (53 on the ground) in the first half and UK added only a touchdown in the second half and finished with 262 yards of total offense. UK came in averaging 27.9 points/game  and 361 yards of total offense. The Wildcats were 3-for-12 (25%) on third downs.  The defense kept the Wildcats to a field goal on their first possession after the Kentucky drive started at the Georgia 32-yard line following a turnover.  The Bulldogs held Kentucky to just 12 yards on six plays before the Wildcats connected on a 37-yard field goal. Junior ILB Roquan Smith led UGA with nine stops, including a sack.

*Starters: Redshirt freshman RG Ben Cleveland started for the first time.  This marks the 15th first-time starter that Georgia has had this season.  Sophomore DE David Marshall got his first nod of the year (fifth of his career) on defense.

*Turnovers: Georgia is +2 in Turnover Margin this season and even on the day.  Jake Fromm threw his fifth interception on Georgia’s first possession at the 32-yard line.  Kentucky scored a field goal on the ensuing possession.  In the third quarter, senior DB Aaron Davis had his first interception of the year (fifth of his career) on the Bulldog 12-yard line.  The Bulldogs scored a touchdown on their next possession.

On the win…
“What a great way for these seniors to go out – winning the SEC East by going undefeated against the East. Our seniors have given us tremendous leadership, and I’m happy and proud of them. Our seniors have set the standard and our
young players have bought in. It helps to have such great leadership.”

On running the ball…
“We want to be able to do that on a consistent basis. We want to throw it too, but those 3- and 4-yard runs wear on people.”

On going undefeated against the SEC East…
“People don’t understand in the SEC, it’s a challenge every week. There are no easy games. No one can walk out and destroy a team in the first half. You just don’t do that.”

On playing Georgia Tech…
“Tech has a unique offense that you don’t get to play but once a year. It’s very different and you work on it and you try to simulate it. You have to do your job. And we need to do a good job of controlling the ball on offense.… Our scouts will have to be prepared this week to give us the best picture they can.”

On this week’s schedule…
“We’ll have more time this week with no school. We’ll meet with them and have walkthroughs and help them prepare. We’ll focus on giving thanks and on preparing for Tech.”

On the Georgia fans…
“Our fans showed out for our seniors. These guys deserved that and I appreciate our fan base for that. …Recruiting is affected immensely by the atmosphere of home games. We want to be the best we can be. Our job is to put a good
product out there.”

On earning his first start at right guard…
“It was great. There was great competition all week throughout practice; a lot of hard-fought battles, a lot of guys moving around at different positions. It felt real nice to go out here for these seniors tonight in my first start and just leaving it out all on the field.”

On feeling any nerves before the game…
“I mean I was a little bit nervous, I’m not going to lie, but I knew in the end it was all going to come down to my effort and just doing my assignments.”

On his performance…
“I think I played pretty well. We’ve been working real hard focusing on communication up front on the offensive line. I think we had probably our best game of communication tonight and that’s what helped us win.”

On earning his first start at right guard…
“It was great. There was great competition all week throughout practice; a lot of hard-fought battles, a lot of guys moving around at different positions. It felt real nice to go out here for these seniors tonight in my first start and just leaving it out all on the field.”

On Kentucky’s only touchdown, which came on a one-yard Benny Snell, Jr. run in the “wildcat” formation…
“We practiced that wildcat all week. We knew we had a couple fixes here and there. We kind of held them pretty good in the
run game besides those ones they kept bouncing. Once we started fitting those right, everything was cool.”

On the punt where he was fouled, drawing a 15-yard penalty and extending the Georgia drive towards the Bulldogs’ first touchdown…
“I knew they were probably bringing a lot of pressure, so I know how to get it off pretty quick. I thought I got off a good punt, but the guy came off the backside edge and I think it was a pretty late hit, so I’m glad we got the penalty.”

On whether Georgia won the battle of field position…
“Oh, absolutely. They didn’t have any return yards on me today and I think we had a really big return and they had a touchback [punting], so they didn’t have great net punting today. I’m happy with what we did.”