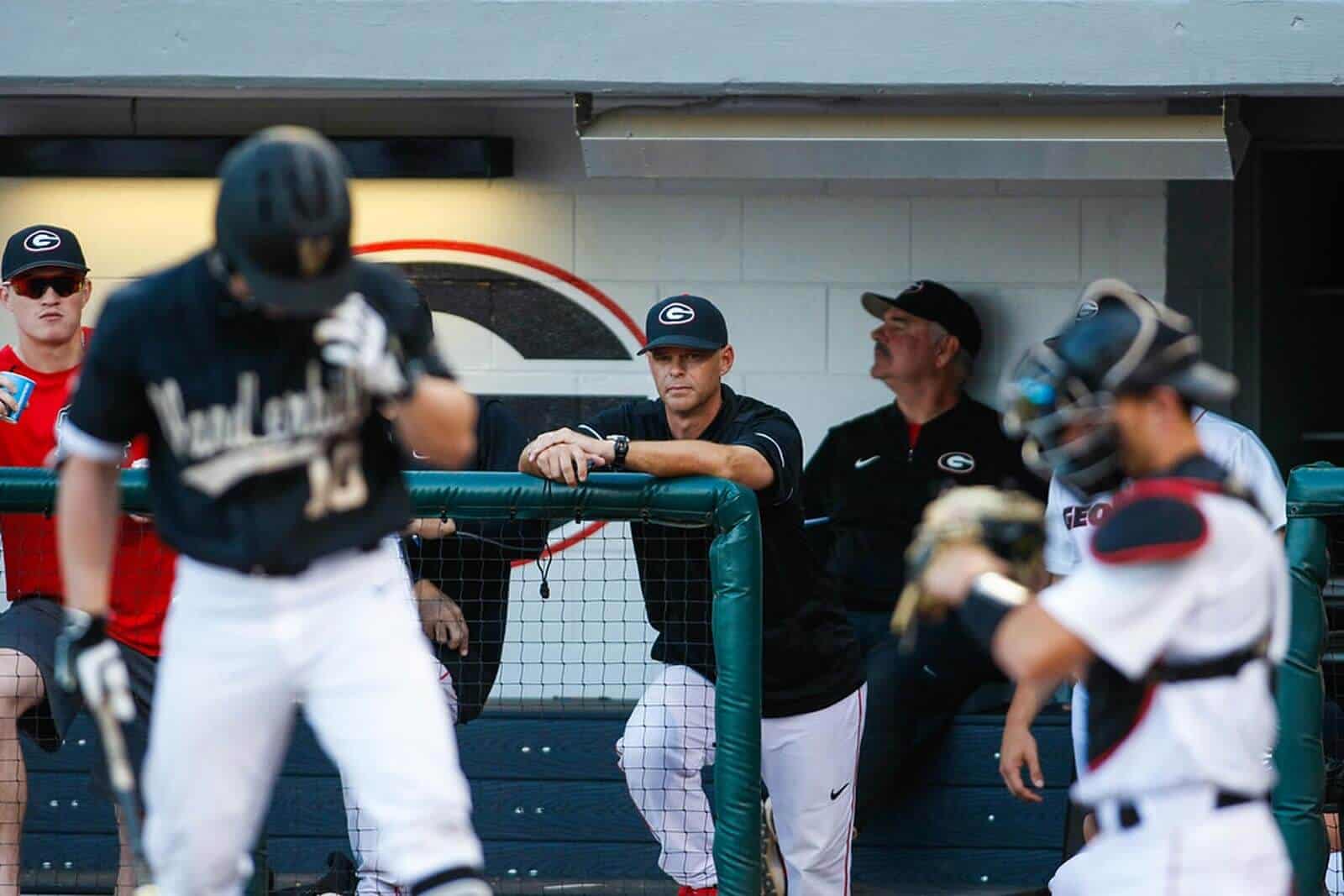 All seven newcomers will arrive from the high school ranks with six from the state of Georgia and one from Florida.

“We are looking forward to this talented class coming to the University of Georgia,” Stricklin said. “This is a pitching-rich group along with three position players that are excited to join the Bulldog program. Coach (Scott) Daeley and Coach (Sean) Kenny have worked extremely hard to put this class together, and we feel that this latest class will make an immediate impact.”

Here’s a look at the newest Bulldogs:

Attends Manchester High School where he plays for his father Bari Brown…Led the team with a 2.43 ERA and 55 strikeouts as a junior, going 3-5 in 40.1 innings plus batted .371 with 10 RBI and 20 stolen bases seeing action around the diamond…Helped the Blue Devils post a 13-13 record…Earned First Team All-Region honors as a pitcher…Also a four-year letterman in football and basketball plus an Honor Role student….Summer baseball action with the Home Plate Chili Dogs Maldonado…Son of Deana and Bari Brown…Father played baseball at LaGrange College.

“I’ve always wanted to attend UGA since I was a kid, and I feel Georgia will give me the biggest chance to succeed,” said Brown.

Coach Stricklin on Brown: “Garrett is a tall, lanky right-handed pitcher who is very athletic for his size. He fields his position well with quick feet and throws his fastball in the low 90s. He’s got a chance to be a frontline starting pitcher. He’s also having a great year as the quarterback for Manchester.”

Attends Worth County High School where he plays for Will Smith…Tallied an 8-1 record, 1.56 ERA with 80 strikeouts in 58 innings as a junior…Also batted .368 with a team-best four home runs and 26 RBI as a catcher…Helped the Rams go 23-6 and win the region title…Summer baseball action with Game On Stealth, Team Georgia and the Team USA 16U National Development Team…Son of LeighAn and Marty Goodwin.

“UGA has been my dream school and having the chance to play baseball for UGA made me decide to choose UGA,” said Goodwin.

Coach Stricklin on Goodwin: “Hunter is a big, strong, physical and durable right-handed pitcher. He is built to be a starter and commands three pitchers for strikes with a fastball is in the low 90s.”

Attends Charlton County High School where plays for Thad Marchman…Posted an 8-1 record, 3.89 ERA with 122 strikeouts in 72 innings as a junior…Also batted .300 with two home runs and 23 RBI as a corner infielder…Helped the Indians go 27-8 and reach the semifinals of the state playoffs…Named All-State and 2017 Region 2A Pitcher of the Year…Named 2016 Region 2A Player of the Year after going 8-1 with 92 strikeouts in 69 innings…Summer baseball action with Five Star Nationals and Team Georgia…Son of Monica Ellis and Andy Gowen..Older brothers played collegiate sports, Drew (baseball at Darton College) and Will (football at Jacksonville University).

“It has been a dream of mine to attend and play baseball at the University of Georgia since I was a little kid,” said Gowen. “I am looking forward to the opportunity to fulfill my dream, and I can’t wait to be a part of such a special program.”

Coach Stricklin on Gowen: “Jack has a closer mentality with great makeup. He throws from different arm angles with an excellent fastball and sharp slider. We’ve followed him for the past two years, and he really made a jump this summer.”

Attends Glynn Academy where he plays for Trent Mongero…Batted a team-best .444 with one home run, 28 RBI and 32 stolen bases in 33 games as a junior…Helped the Terrors go 24-10, claim a region title and advance to the sweet 16 of the playoffs…Named the Region Player of the Year…Also starting quarterback and four-year letterman for the Terrors and has led them to a region championship…Member of the Principal Honor Roll all four years…Summer baseball action with the Chain National squad and they won the BCS title and reached the finals of the WWBA Championships…Son of Christa and Randy Jernigan.

“I’ve always dreamed of being a Dawg, and I’m blessed to receive this opportunity,” said Jernigan.

Coach Stricklin on Jernigan: “Randon is a quick-twitch athletic outfielder. He’s a leadoff type hitter who can steal bases and put pressure on defenses. We expect him to be an impact player in our lineup early on and along with (fellow UGA signee) Caberea Weaver, they make up two of the fastest players in the country.”

Attends Gulf Coast High School where he plays for Pete Garcia…Batted .329 with one home run, 16 RBI and 13 stolen bases in 32 games as a junior….Helped the Sharks go 24-8 and capture a region title…Named First Team All-District…Also lettered as a member of the band…Summer baseball action with Team Elite Prime…Son of Shannan and Patrick Marshall.

“I’m ready to get into Georgia and see what I can do for the team,” said Marshall.

Coach Stricklin on Marshall: “Shane is an excellent defensive catcher with a plus throwing arm. He has lots of bat speed and will develop into a hitter with power. He’s a great leader who will challenge for playing time as a freshman.”

Attends South Gwinnett High School where he plays for Steve Teschner…Batted .301 with one home run, 13 RBI and 12 stolen bases in 26 as a junior…Helped the Comets go 14-14 in 2017…Earned Honorable Mention honors by Perfect Game and selected to the 2017 Perfect Game All-American Classic…Has been clocked in the 60 as fast as 6.27…Summer baseball action with MGBA Brewers…Son of Paula Littlejohn and Corey Craigen.

“I chose UGA because it’s the best place for me and to compete in baseball too,” said Weaver.

Coach Stricklin on Weaver: “Caberea is an athletic baseball player with great instincts and an excellent defender. He takes great routes to the baseball. As a hitter, he puts pressure on the defense with his speed and handles the bat well. He can bunt for a hit and has developing power. He and (fellow UGA signee) Randon Jernigan are two of the fastest players in the country.”

Attends Heritage High School where plays for Eric Beagles…Posted a 9-3 record, 2.40 ERA with 70 strikeouts, all team highs, in 64 innings as a junior…Saw action as an outfielder/first baseman and batted .339 with three home runs and team-best 41 RBI in 2017…Helped the Generals go 30-9…Already holds school record for career strikeouts with 162…Named All-State in 2016 and 2017, Region Pitcher of the Year and Region Player of the Year…Also lettered in football and basketball…Named a Georgia Merit Scholar, member of Beta Club and National Honor Society…Summer baseball with Team USA 18U squad that captured gold medal in the World Cup…Named Under Armour All-American, Perfect Game All-American…Selected to the 2017 Perfect Game All-American Classic…Also played with Exposure Baseball based in Chattanooga, Tenn…Ranked among the top 20 prep prospects for the 2018 MLB draft…Son of Sandy and Lee Wilcox…Mom played collegiate basketball for Chattanooga State.

“I’m a lifelong UGA fan, and it was easy to choose Georgia for this reason,” said Wilcox. “I want to contribute and be a part of UGA winning an SEC Championship and getting back to Omaha. The coaches and my future teammates at Georgia are already setting the path for this to happen, and I want to help make that a reality.”

Coach Stricklin on Wilcox: “Cole is a front-line SEC starter and one of the best high school pitchers in the country. He’s been pitching at a high level for a long time, throwing in the mid 90s, and he helped the Team USA squad win gold this summer.”