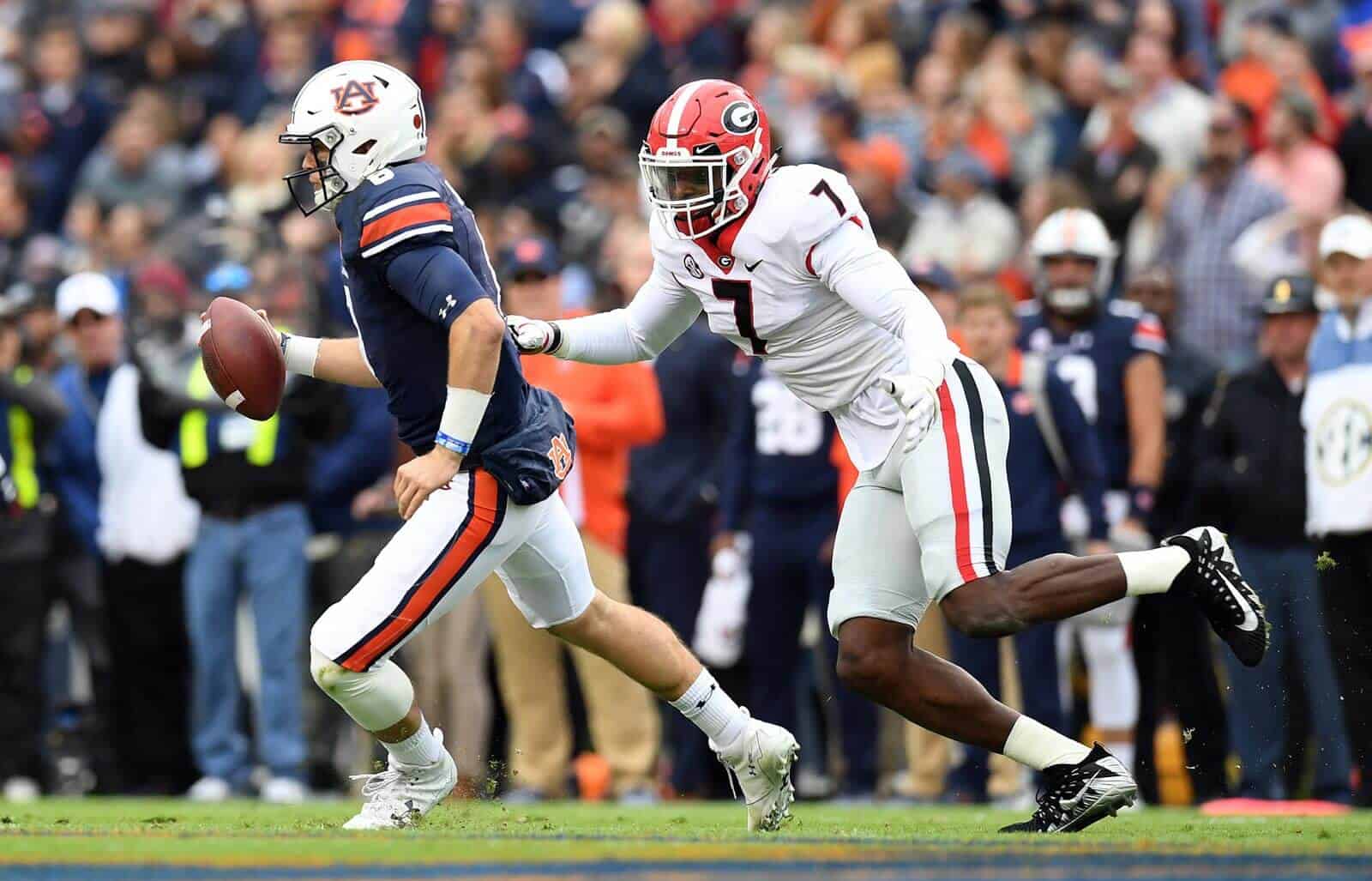 AUBURN, Ala. – The No. 2 Georgia Bulldogs had their unblemished season snapped with a 40-17 loss to 10th-ranked Auburn Tigers Saturday evening at Jordan-Hare Stadium.

The Bulldogs fall to 9-1 overall, 6-1 in the Southeastern Conference. Auburn (8-2, 6-1) used a heavy dose of Kerryon Johnson and a stifling defense to earn the victory. Johnson tallied 167 rushing yards; marking the first time a Georgia opponent had surpassed the 100-yard mark in a nation-best last 12 games.

Offensively, the Bulldogs finished with 230 yards of total offense, 184 yards in the air. Freshman quarterback Jake Fromm went 13-of-28 for 184 yards and a touchdown, while senior wide receiver Javon Wims had a team-high 96 yards on three catches. The Auburn defense kept the Georgia rushing attack at bay as senior running back Nick Chubb had a team-high 27 yards.

In the game’s opening possession, Georgia orchestrated an eight-play, 70-yard drive capped by a direct snap Nick Chubb one-yard touchdown rush. In the drive, Fromm went 3-of-3 passing for 56 yards including a 28-yard pass to Wims on a 3rd down.

Auburn took its first lead 9-7 at the 12:08 mark of the second quarter on three consecutive Daniel Carlson field goals. Later in the quarter, the Tigers hit on a 42-yard Darius Slayton touchdown catch to go up 16-7, which stood until halftime.

Two third-quarter Auburn touchdowns strengthened the Tiger lead to 30-7, before the Bulldogs responded. Redshirt sophomore Rodrigo Blankenship booted a 47-yard field goal to make it 30-10 at the 5:23 mark in the third quarter.

After Auburn notched a field goal and another touchdown, Georgia put up a touchdown in the final minutes of the game. Sophomore wide out Riley Ridley caught a 14-yard pass from Fromm to end a 14-play, 74-yard drive.

The Bulldogs conclude their conference schedule against Kentucky next Saturday, Nov. 18. Kickoff is slotted for 3:30 p.m. and will be televised on CBS.

*First Loss Of The Season: Georgia fell to 9-1 overall and 6-1 in the SEC after today’s 40-17 loss to Auburn. Also, today was the first time since the fourth quarter of the Notre Dame game in South Bend in week two (Sept. 9) that Georgia trailed in a game. In that contest, No. 24 Notre Dame went ahead 19-17 with 10:21 left and held the lead until Georgia kicked a field goal with 3:34 remaining to go up 20-19 and that would be the final. Today with 12:08 left in the first half, Auburn took a 9-7 lead and then extended it to 16-7 with 4:09 left in half and that would be the halftime score. Ultimately, Auburn scored 30 unanswered points until a 47-yard field goal by Rodrigo Blankenship made it 30-10 with 5:23 left in the 3rd quarter.

Georgia now sees its all-time series lead with the Tigers trimmed to 57-56-8. Today was the fourth time that the teams met when both were ranked in the top 10, and the Tigers have won each time (1971, 1983 & 2004). This was the first time that the Bulldogs were ranked higher in these top 10 matchups.

*Early Points at a Premium: At the half, Auburn led 16-7. Both teams came in averaging 36 points a game today. The Tigers added three TDs plus a field goal in the second half for a 40-17 victory. The Bulldogs came in ranked third nationally in scoring defense at 11.7 points a game. Today, Georgia’s leading tacklers were junior LB Roquan Smith with 12 and redshirt sophomore J.R. Reed with a career-high 11.

*Rushing Tally: After allowing four sacks, Georgia’s net rushing tally was 46 yards on 32 attempts. The Bulldogs had given up just nine sacks on the year coming in today.  Senior Nick Chubb had a team-high 27 yards on 11 attempts. In the first quarter on a six-yard run, Chubb moved up to fourth in SEC history in career rushing yards passing Auburn’s Bo Jackson (4,303 yards). After today, Chubb’s current total is 4,318 yards.

*Passing Game: In the first half, freshman QB Jake Fromm was 4-for-8 for 86 yards and finished 13-for-28 for 184 yards and one TD. On Georgia’s opening drive of the game, he led an eight play, 70-yard touchdown drive capped by senior tailback Nick Chubb’s 1-yard plunge for his 43rd career TD overall and 39th rushing. Fromm converted a 3rd and 7 by completing a 28-yard pass to senior Javon Wims who finished with a career-high 96 yards on three catches. Georgia was forced to punt on five of its final six drives of the half plus missed a 42-yard field goal at the end of the half. In the second half, Georgia’s scored 10 points including a 14 play, 74-yard TD drive capped by a 14-yard pass from Fromm to Riley Ridley.

*Busy Day For Hardman: Sophomore Mecole Hardman finished with 203 all-purpose yards including 142 on kickoff returns, 43 on punt returns plus 7 on the ground and 11 receiving. In the first half alone, he had 162 return yards. Coming in today, he had 288 return yards (178 KOR, 110 PR) for the year. On the final kickoff of the first half and in the second half, Auburn popped them up short. In the second half, Hardman had one fumble on a punt return that led to a Tiger touchdown and a 23-7 deficit.

*Points Off Turnovers: Georgia did not force any turnovers while AU got seven points off 1 fumble on a punt mishandled by sophomore Mecole Hardman. Opponents have scored 38 points off 12 Bulldog miscues. Meanwhile, Georgia has scored 48 points off 14 turnovers.