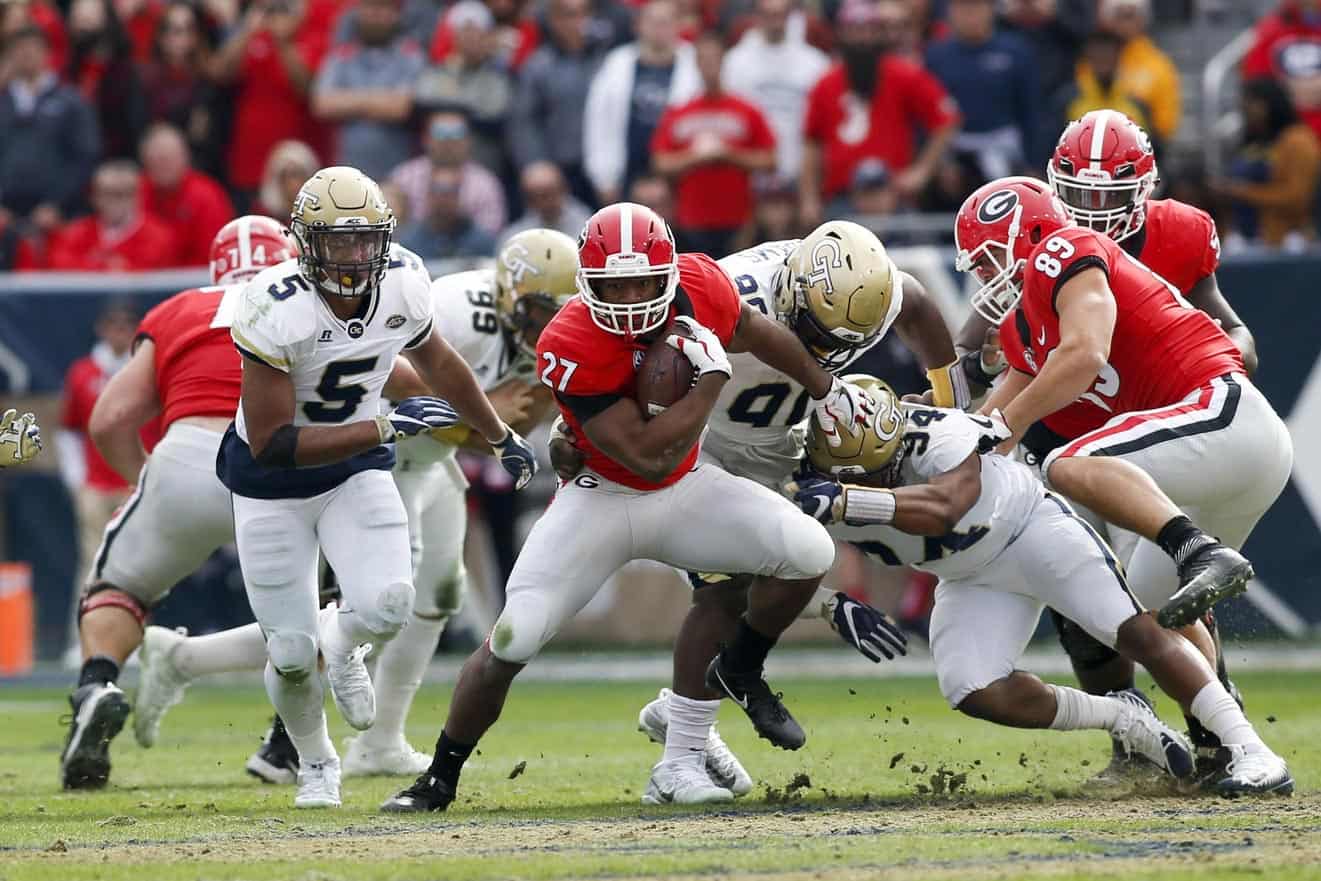 The Georgia (11-1, 7-1 SEC) win marks its ninth-straight win over the instate rival in Atlanta dating back to 2001. Georgia Tech’s season concludes with a 5-7 overall mark, a win shy of bowl eligibility.

“They’ve got a good football team,” Georgia head coach Kirby Smart said. “It’s a very hard offense to prepare for. Our kids took the challenge head-on and did a good job preparing for it. Thought we controlled the ball offensively in the second half. Those are some good things.”

The Bulldogs used a balance attack offensively with 224 passing yards and 247 rushing yards. Freshman quarterback Jake Fromm went 12-for-16 in the air for 224 yards and two touchdowns, while senior wide receiver Javon Wims led the team in receiving with 77 yards on five catches and a score.

Six Bulldogs recorded rushing yards, five of which had more than 20 yards. Senior tailback Sony Michel had a team-high 85 yards, senior back Nick Chubb tallied 53 yards and freshman running back D’Andre Swift notched 37 yards – each with a score. Sophomore running backs Elijah Holyfield (35) and Brian Herrien (17) along with Fromm (20) rounded it out.

Defensively, junior inside linebacker Roquan Smith collected team-high nine tackles including three for a loss and one sack. Fellow linebackers D’Andre Walker and Natrez Patrick chipped in six and five tackles, respectively, while Deandre Baker recorded the only takeaway with a second-half interception in the GT end zone.

“Our kids have played really hard,” Smart added. “They’ve gotten better throughout the year. They’ve bought into what we’re trying to do as a program. We’re really excited about where we are, and we’ve got a challenge next week.”

After forcing a Yellow Jacket punt on the game’s opening possession, the Bulldogs coordinated a 12-play, 61-yard touchdown drive. Chubb scored from one yard out, while Michel compiled 25 yards on the drive including a critical 3rd down pickup where he shed two tackles.

Georgia Tech put together a 12-play, 56-yard drive that started in the first quarter and spilled into the second quarter, but boiled over with a failed fourth-down attempt. The Bulldogs turned it into a touchdown quickly with six-straight run plays for 44 yards and then a 21-yard pass from Fromm to Wims for the score.

The Yellow Jackets got on the scoreboard in the final minute of the first half on a 10-yard touchdown pass from TaQuan Marshall to Ricky Jeune. The Bulldogs offense moved efficiently with 42 seconds left setting up a Rodrigo Blankenship 37-yard field goal to head into the half with a 17-7 lead.

At the half, Fromm was 8-for-10 for 91 yards, while Wims had four catches for 61 yards and his team-leading 6th receiving touchdown of the year. Michel tallied 67 yards on the ground on eight carries to move up to third all-time in rushing yards behind Chubb.

Georgia scored on three of its five possessions in the second half to seal the victory. The only non-score drives consisted of a punt and the final possession in which Georgia controlled the ball for 7:19 leaving GT the ball with only seven seconds left.

Michel tallied the first touchdown on a four-yard run after a 39-yard catch by sophomore receiver Mecole Hardman set it up. In the subsequent drive, Georgia marched down the field 67 yards, all but five yards on the ground. Swift highlighted the last two plays with a 31-yard run on a 3rd-and-9 and an over-the-top 2-yard score.

Georgia competes for the program’s 13th SEC title next Saturday against either Auburn or Alabama at Mercedes Benz Stadium in Atlanta. Kickoff is scheduled for 4 p.m. and will air on CBS.

*Bulldogs Post Notch 11th Win: With today’s 38-7 victory, seventh-ranked Georgia completes the regular season with a 11-1 record, marking the 10th team in school history to  win at least 11 games in a season and the first since 2012. The seniors improves their record to 39-12. Also, Georgia has reclaimed the Governor’s Cup Trophy and extended its advantage in the series to 66-39-5. Georgia’s 38 points was the most against Tech since 2013 (41-34 OT win).

*Stout Defensive Performance: The Bulldogs came in ranked fourth nationally in Soring Defense, allowing only 14.4 points a game and held Tech’s option attack to just seven points and 226 total yards (188 rushing). Tech was averaging 30.2 points/game and 319.3 rushing yards a game. Today’s leading tackler for the Bulldogs was junior Roquan Smith with eight stops, 3 TFL and one sack. He has a team-best 99 tackles on the year.

Tech was blanked in the 1st quarter, tallying 57 yards on 13 plays. For the year, Georgia has outscored its opponents in the first quarter, 118 to 29. Tech became the eighth team this season to be held scoreless in the first quarter. In the 2nd quarter, Georgia stopped a 12-play Tech drive that lasted 6:23 on a fourth down attempt at the Bulldog 34. Georgia’s offense responded with a touchdown drive and a 14-0 lead. Tech scored a touchdown with 48 seconds left to make it 14-7, driving 75 yards on 12 plays in 6:17. It gave them 161 yards of total offense in the first half on 35 plays. Tech failed to score in the second half.

*Points off Turnovers: Georgia is +3 in Turnover Margin, scoring 62 points off 16 turnovers. Opponents have forced 13 turnovers and turned them into 41 points. Bulldog junior DB Deandre Baker notched an interception in the endzone and returned it 15 yards with 12:52 left in the game. It was his second of the year, the other coming versus Miss. State. Georgia turned today’s turnover into a TD and a 38-7 advantage.

*For Starters: Senior strong safety Dominick Sanders made his 50th career start which ranks in a tie for fourth most in school history and the most by a defensive player. For the second straight week, redshirt freshman Ben Cleveland got the start at right guard. Senior tailbacks Nick Chubb and Sony Michel both started. It was the 37th career start for Chubb and 10th for Michel, but first of the year for Sony.

*Up Next: Georgia (11-1, 7-1 SEC) plays in the SEC Championship Game next Saturday, Dec. 2 in Atlanta at the Mercedes-Benz Stadium against the Auburn/Alabama winner.