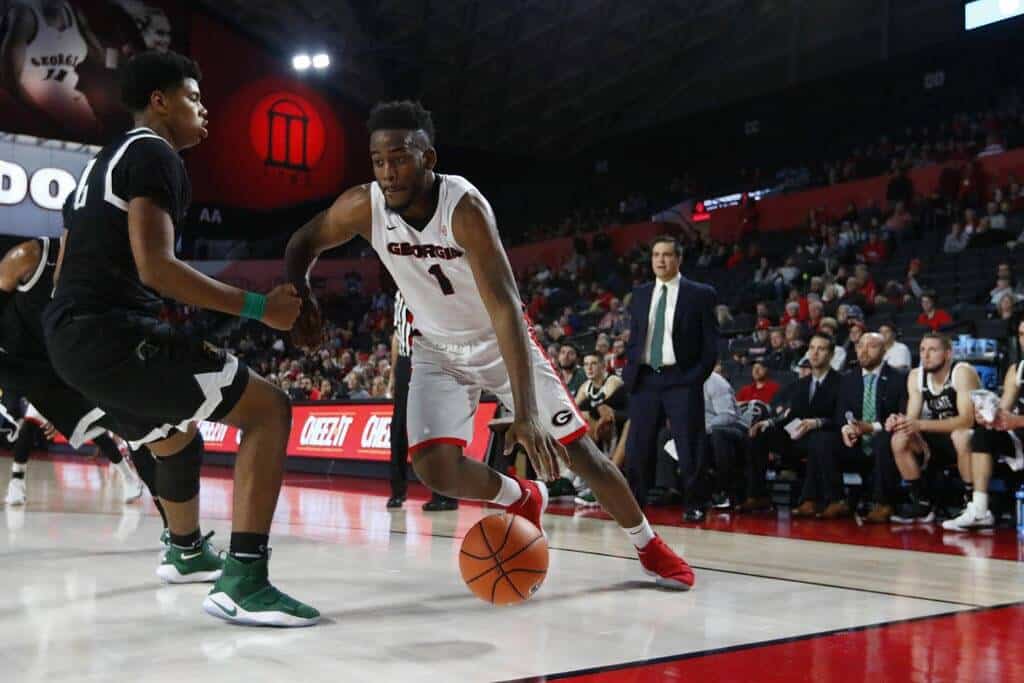 Photo: Steffenie Burns/UGA
ATHENS, GA – The Georgia Bulldogs men’s basketball team defeated the USC Upstate Spartans 74-65 on Tuesday night in Stegeman Coliseum.
Senior forward Yante Maten led the Georgia offense with 22 points and 14 rebounds, which marked his 18th double-double of his Georgia career and second straight on the season.
Junior guard William Jackson II and freshman forward Rayshaun Hammonds posted 13 points as well. Jackson’s total was a new career high, due to three free-throws in the final 20 seconds of the game. He also tied his career assists with four. Hammonds posted his second consecutive double-digit point total as a freshman.
“We came and competed well,” said Georgia head coach Mark Fox.  “We needs games like that to grow, and my hat is off to their team on their effort. But that game is very good for us, and I think it is a good experience for us.”
Going into the half, Georgia (2-0) led 34-30. The Bulldogs took the advantage early with a lay-up from junior forward Derek Ogbeide, which they maintained for the entirety of the half.  The first half points were dominated by Jackson with 10, as Georgia channeled balanced scoring with 10 of the 11 players on the court posting numbers on the board.
Georgia started the second half strong with a 10-5 run and three buckets from Maten, Ogbeide, and Hammonds. USC Upstate (1-2) had a 14-1 run to give them the lead, started by junior guard Deion Holmes’ three-pointer. Georgia fought back for the lead, 53-52, with a dunk from junior forward E’Torrion Wilridge and Maten’s tip-in. With 6:21 remaining in the game, the Bulldogs took back the lead with a Hammonds jumper followed by a lay-up assisted by Maten.
Maten continued the momentum for the Bulldogs scoring nine points, complimented by three free-throws by Jackson, enabling the Bulldogs to clinch the game 74-65.
The Spartans entered the game shooting 43.1 percent, and Georgia held them to 37 percent. The Bulldogs also outscored the Spartans in free-throws with 17 to their five, with 15 in the second half alone. Two other players posted career highs as well. Wilridge recorded five assists and Hammonds inked two steals.
The Bulldogs return to Stegeman Coliseum on Sunday, November 19th, at 1:00 p.m. against Texas A&M Corpus Christi. The game will be available for streaming on SEC Network +.
Head Coach Mark Fox
On gaining back the lead…  “We couldn’t handle that lead very well. Eventually, the lead eroded and the momentum of our play kept going the wrong direction, but the good thing is we fought our way through it.” On second half and switching up…  “We put Mike [Edwards] and Yante [Maten] together because they are both mobile, and both experienced. We really switched everything, we got behind, and they that allowed us to get a few stops and get a couple breaks and get the lead back. This is not the normal way we want to play, but Mike’s experience I think was key for us, and allowing us to do that.”  On Turtle Jackson and Teshaun Hightower… “I thought Turtle [Jackson] did a couple things in the first half where he showed command, but I think that is still an area that is going to take time. When you have such a vocal, strong leader in J.J. Fraizer, when that voice leaves, and you have to replace all of that, that is going to take some time, and it is going to take multiple guys to do it. We saw progress there tonight. We have great point guards. We have Turtle and Teshaun [Hightower], which are a couple guys who have a couple years left in them.”
Senior forward Yante Maten
On the fighting through adversity…
“One of the things a leader has to do is encourage, so I try my hardest to encourage my teammates. We started strong and we kind of dipped and I told everyone on the bench we have to watch our energy level on the bench. Everybody on this team is good and everyone on this team is capable of starting on another team. We just have to collectively come together and make sure we’re playing good defense and good sound offense and not turning the ball over.”
Junior guard William Jackson II
On how he thought the team fared tonight guarding the perimeter… “I think we did well. You know, the goal is to always win. USC Upstate is a great team. They had some great shooters out there so we were trying to force their length and their depth.” On playing a close game early in the season… “I think it’s great. You know, it’s a good challenge. We were down at a time and to come back and pull that weight.” On the amount of three’s taken… “Keep shooting. You know, because if we were open we don’t want to turn down any open three’s. We have been working on our shooting so our confidence will grow throughout the season.”