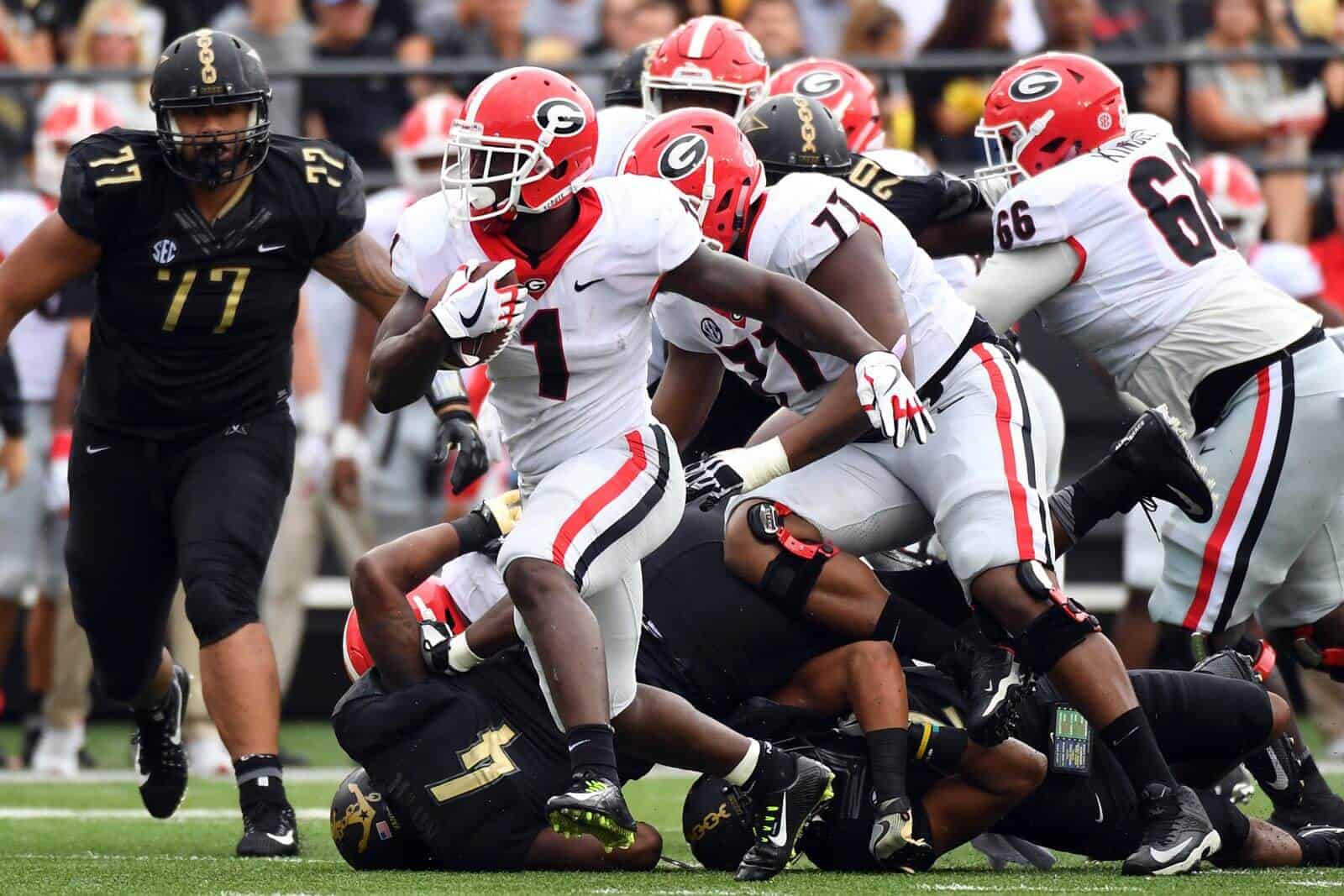 “Physicality on the front, I was really proud of the offensive line today,” Georgia head coach Kirby Smart said. “They had a little bit of a chip on their shoulders from last year, because they didn’t feel like they played their best game against that team. Obviously, they don’t have some of the same guys back, but they have some of them – it was the same defensive lineman. We think our offensive line played physical and our backs ran hard. Jim (Chaney) called a good game and the offense did a nice job today.”

Georgia amassed a season-high 423 rushing yards as senior running backs Nick Chubb and Sony Michel led the way with 138 and 150 yards, respectively. The 100-yard rushing game marked Chubb’s 21st of his career and his two touchdowns moved him ahead of Todd Gurley and Lars Tate for career rushing touchdowns with 37.

“Sony (Michel) and Nick (Chubb) are a dynamic duo,” Smart added. “What a blessing to have them back. They run with great pad level. They are tough kids and the proudest thing I’m of them is that they protected the ball.”

Through the air, freshman quarterback Jake Fromm went 7-for-11 for 102 yards and two touchdowns. Fromm also gained 36 yards with his feet on four carries. Leading the receiving group, wide out Terry Godwin had 70 yards on two catches including one touchdown. Freshman tailback D’Andre Swift also added a receiving score.

Defensively, junior inside linebacker Roquan Smith was the team’s leading tackler for the fourth time this season as he collected seven total stops and added a pass breakup. The Bulldogs held the Commodores to 6-of-15 on third downs and yielded only 64 rushing yards.

On Georgia’s opening possession, the Bulldogs marched 83 yards on seven plays – all on the ground – concluding with a 33-yard touchdown run by Chubb who tallied 69 yards on five carries in the drive.

The Bulldogs’ second scoring drive started after the Commodores shanked a punt, leaving Georgia a short field to work with. On a 3rd-and-goal, Fromm connected with Swift out of the backfield for a 5-yard touchdown pass to put UGA up 14-0 early in the second quarter. Michel notched 46 yards on the ground on five carries in the eight-play drive.

Georgia’s longest drive of the first half lasted 8:12 and ended with a 14-yard scamper by Chubb that made it 21-0. Earlier in the drive on a 3rd-and-14, Fromm found Godwin for a 23-yard gain that put Georgia on Vandy’s side of the field. The last two plays of the drive consisted of a read-option keep by Fromm for 16-yards and Chubb’s untouched score.

Vanderbilt broke Georgia’s defensive streak of scoreless quarters at seven when the Commodores punched in a rushing touchdown in the final minute of the first half to make it 21-7.

At the half, Georgia had 224 total yards with 173 yards coming from the rushing attack on 24 carries and 51 yards through the air. Fromm was an efficient 5-for-7, while Chubb already eclipsed the 100-yard mark at 106.

It took all of one minute and 46 seconds and four plays for Georgia to strike in the opening possession of the second half. After a 20-yard gain by Michel, Fromm threw a dart to Godwin for a 47-yard touchdown, giving Georgia a 28-7 lead.

The Georgia defense forced a three-and-out of the Commodores on the next possession, giving the offense the ball again. The Bulldogs bested their last scoring drive by scoring on the third play this time. Michel busted through the middle and bolted 50 yards for a touchdown, which put him over the 100-yard rushing mark. The drive was all Michel as he carried it three times for 64 yards.

Georgia finished its scoring display in the fourth quarter with a 15-yard run by sophomore back Elijah Holyfield. Holyfield finished with 51 yards on seven carries.

Georgia completed the game with a season-high 549 total yards and was 4-for-4 in the red zone to stay perfect in that area at 23-for-23 on the season. The Bulldogs also collected a season-best 27 first downs.

The Bulldogs continue conference play against the Missouri Tigers at Sanford Stadium Saturday, October 14th. SEC Nation set is tabbed to be on the Athens campus prior to the scheduled 7:30 p.m. kickoff on SEC Network.

*Another SEC Road Win: With today’s 45-14 victory, Georgia notched its second straight SEC road win and improved to 6-0 overall, 3-0 in the SEC. This marks the Bulldogs first 6-0 start since the 2005 season when it began 7-0. Also, this is the first time since the 2012 season that the Bulldogs have posted a six-game winning streak during a season. Georgia now leads the all-time series with the Commodores 56-20-2 dating back to 1893.

*Stellar Defense Continues: Georgia took a 21-7 lead to halftime and ultimately won 45-14. Coming in today, Georgia was allowing just 9.2 points/game and that ranks second nationally. When Vanderbilt scored a TD with 28 seconds left in the first half, it ended a streak by the Bulldog defense of 31 consecutive drives without giving up a TD. That stretch was the longest since 2006 when the Bulldogs defense also had a streak of 31 drives. Vanderbilt’s TD was the first allowed by Georgia since the fourth quarter of the Samford game. Since then, the Bulldogs beat #17 Miss. State 31-3 and Tennessee 41-0. The Commodores final TD came following a Bulldog turnover that gave them the ball at the 1 yard line midway through the fourth quarter. Georgia’s leading tackler today was junior LB Roquan Smith with seven stops as he has a team-high 45 on the year.

*Red Zone Efficiency: Georgia went 4-for-4 (3 TDs, 1 FG) Inside the Red Zone to remain perfect on the year now at 23-for-23 including 17 TDs and six field goals. Georgia is tied for first nationally in that category. On defense, Georgia came in leading the SEC in the Red Zone, holding opponents to a score 70 percent of the time (7-of-10). Vanderbilt was 2-for-2 with two TDs. In the SEC this year, #17 Miss. State went 1-for-3 inside the red zone versus Georgia while UT did not get inside the red zone.

Also, today marked the first time since the 2014 Auburn game that a pair of Bulldogs went over 100 yards and scored at least one touchdown each. In 2014, Chubb (144 yards, 2 TDs) and Todd Gurley (138 yards, 1 TD) keyed the Bulldogs 34-7 win over No. 9 Auburn in Athens. Today, Chubb, registered his 21st career game with 100+ yards rushing while it was the ninth for Michel. It was Michel who made it 35-7 with a 50-yard TD that put him over 100 yards for the day. Sophomore Elijah Holyfield collected his first career TD, a 15-yarder in the fourth quarter to extend the lead to 45-7. On Georgia’s first possession, the Bulldogs had a seven play, 83-yard drive that featured all rushing plays and one penalty. Chubb accounted for 69 yards on five carries, capped by a 33-yard TD scamper. Chubb moved into sole possession of 2nd place for career rushing TDs (37) following his 14-yard TD run to make it 21-0 with 1:58 left in the first half. Herschel Walker holds the record with 49. Also, he moved up to second all-time in career rushing attempts now with 626. Walker holds that mark too at 994.

*Fromm Directs Offense: Freshman QB Jake Fromm led Georgia to a 45-14 win, going 7-for-11 for 102 yards and 2 TDs.  His first TD pass came on a 3rd and goal, resulting in a five-yard TD pass to freshman D’Andre Swift to cap an 8-play, 45-yard drive for a 14-0 lead. It was the first career TD catch for Swift. Fromm opened the second half with a four play, 75-yard scoring drive highlighted by a 47-yard TD pass to junior Terry Godwin to make it 28-7. Sophomore QB Jacob Eason played much of the fourth quarter, finishing 3-for-3 for 24 yards.

*Points Off Turnovers: Georgia did not create any turnovers while the Commodores scored 7 points off one turnover coming on a sack/fumble of Jacob Eason that gave VU the ball at the 1 yard line. Opponents have scored 24 points off eight Bulldog miscues.

The Bulldogs are now +1 in Turnover Margin.

*For Starters: Junior Juwan Taylor (ILB) made his first career start while sophomore Julian Rochester (DL) made his first of the year and seventh of his career. Redshirt freshman Solomon Kindley (RG) returned his starting role, it was his third of the year. Taylor becomes the 12th first-time starter this year.