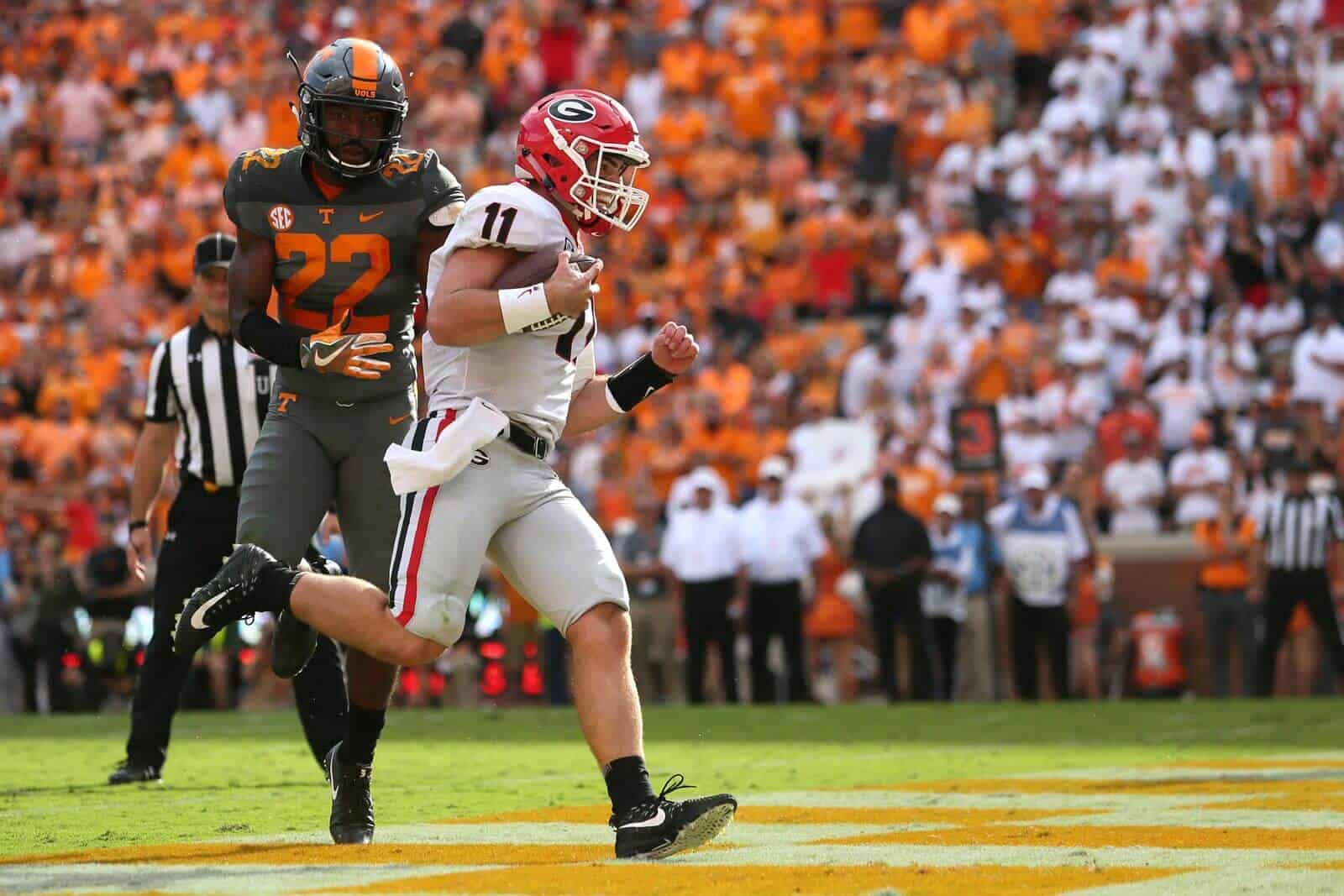 KNOXVILLE, Tenn. – The seventh-ranked Georgia Bulldogs dominated the Tennessee Volunteers 41-0 on Saturday at Neyland Stadium, recording their 800th win in school history in front of a sell-out crowd of 102,455.

Georgia improved to 2-0 in the conference and 5-0 on the season for the first time since 2012. That year, the Bulldogs overtook Tennessee 51-44 for their fifth win of the season. The Volunteers drop to 3-2 on the season and 0-2 in the SEC.

The Georgia defense headlined the contest, holding the Volunteers scoreless with 142 total yards and just over 22 minutes on the field. The group forced Tennessee’s lowest offensive numbers of the season and caused four turnovers, including first career interceptions for junior defensive back J.R. Reed and sophomore defensive back Tyrique McGhee.

Offensively, senior tailback Nick Chubb fueled the team’s 294 rushing yards with 109 yards of his own, including 75 in the first half. Freshman quarterback Jake Fromm recorded three touchdowns, including two rushing as he hit 7-of-15 passes for 84 yards. Sophomore kicker Rodrigo Blankenship extended his torrid total of touchbacks, producing five on his seven kickoffs on the day.

“Defense creates offense,” head coach Kirby Smart said. “That comes from how you practice and the culture you create. We’re getting better at that, but we certainly have a tough test next week with Vandy. The fans had a big part of the day, they had great energy. Our players are certainly appreciative of what our fan base has done.”

It took one play to end Tennessee’s first offensive possession of the game with an interception from McGhee, positioning Blankenship for a 38-yard field goal and the 3-0 Georgia lead.

In the second quarter, Georgia utilized the run game, beginning with an 87-yard march down the field on 11 plays. Chubb collected 42 yards on three-straight carriers to place Georgia in Tennessee territory. The offense continued the drive with a pair of 3rd-and-7 conversions, capped by Fromm’s first career rushing touchdown.

The next Tennessee possession, Deandre Baker broke up the junior quarterback Quinten Dormandy pass to freshman wide receiver Josh Palmer, deflecting the ball into the hands of Reed. The native of Frisco, Texas returned the interception to Tennessee’s 26-yard line. Five plays and 26 yards later, Fromm ran four yards into the end zone to seal the 24-0 first half.

In the second half, Georgia tacked on a touchdown apiece in each quarter. A blocked punt from junior inside linebacker D’Andre Walker paved the way for a 6-play, 55-yard offensive drive. Fromm completed a 19-yard pass to Godwin, and senior tailback Sony Michel provided a 21-yard rushing touchdown on the next play for the 31-0 edge.

Sophomore tailback Brian Herrien and freshman running back D’Andre Swift continued the Georgia run game in the fourth quarter, using six plays for 26 yards for a one-yard Herrien touchdown. With 5:34 remaining in the game, graduate kicker David Marvin notched a field goal to seal the 41-0 final.

Next up, Georgia heads to Vanderbilt to face the Commodores at 12 p.m. on Oct. 7.

*Milestone Win and Shutout: With today’s 41-0 win, Georgia notched its 800th all-time victory in this its 124th season and snapped the Vols scoring streak at 289 consecutive games, a mark that was the fourth longest active streak in the nation and the sixth longest streak in college football history. UT’s scoring streak dated back to 1994 against Florida, a 31-0 loss. The Bulldogs rank 11th nationally in all-time victories. Also, Georgia is now 5-0 for the first time since 2012.  Georgia tightens the all-time series record to 23-22-2 in favor of UT as it dates back to 1899. It was Georgia’s second largest margin of victory in the series and biggest in Knoxville. The only greater margin of victory was 44-0 in 1981 in Athens.

*Stellar Defense With A Shutout: Georgia posted a shutout for the first time since 2014 (34-0 win over Mizzou in Columbia) and ended UT’s streak of scoring in 289 consecutive games (dates back to 1994). The Vols finished with just 142 yards of total offense. Also, the Bulldogs forced four turnovers and turned them into 10 points.  Coming in today, the Vols were averaging 30.2 points a game and tailback John Kelly was averaging an SEC-best 158 yards a game (He had 44 yards on 16 carries at the half today). Georgia blanked #17 Miss. State in the second half in Athens last Saturday as the visitors managed 147 yards of total offense. Georgia’s leading tackler today was junior LB Roquan Smith with 11 stops. After not having an interception through the first three games, Georgia now has four in the past two games. Today, sophomore DB Tyrique McGhee notched the first INT of his career, and it came on the first play from scrimmage while junior J.R. Reed got his first as a Bulldog.

In the second half following a 44-yard reception by the Vols (Dormady-to-Kelly), Aaron Davis forced a fumble and was recovered by Reed at the UGA 33. It led to a punt. Also, junior ILB D’Andre Walker was credited with a blocked punt that gave the Bulldogs the ball at the UT30. It led to a touchdown and a 38-0 lead with 12:00 left in the game.

*Red Zone Efficiency: Georgia went 6-for-6 Inside the Red Zone to remain perfect on the year, scoring four TDs and two field goals. Georgia is now 19-for-19 including 14 TDs and that leads the SEC. Also, Georgia’s scored a TD today from just outside the red zone as senior TB Sony Michel raced in from 21 yards to make it 31-0.

*Fromm Directs Another Road Win: In the first half, freshman QB Jake Fromm led Georgia to a 24-0 lead, going 5-for-12 for 62 yards with 1 TD and 1 INT plus had a nine-yard TD scamper and a four-yarder for his first two career rushing TDs. Fromm’s TD pass today covered 12 yards to senior Javon Wims on a 3rd-and-5 for a 10-0 led in the first quarter. He finished the day 7-for-15 for 84 yards. Overall, Georgia tallied 378 yards of total offense including 294 on the ground.

*Points Off Turnovers: Georgia got 10 points off four turnovers while Tennessee scored no points off one turnover. The first turnover forced came from Georgia sophomore DB Tyrique McGee as he notched his first career interception, and it came on the first play of the game. It gave the Bulldogs the ball at the UT 27. It led to a 38-yard field goal by Rodridgo Blankenship. Bulldog QB Jake Fromm threw an interception at the UGA 27. It led to a UT fumble, which was recovered by senior Lorenzo Carter at the Bulldog 29. The Bulldogs eventually punted. In the second quarter, junior J.R. Reed got an interception after Deandre Baker broke up the pass and returned it 34 yards to the UT 26. It led to a touchdown and a 24-0 advantage. In the second half, Aaron Davis forced a fumble and was recovered by Reed. It led to a punt

For the year, Georgia has scored 27 points off nine turnovers while opponents have scored 17 points off seven Bulldog miscues. Both teams entered today’s contest -1 in turnover margin.

*Chubb Headlines Rushing Attack: Georgia tallied 294 rushing yards highlighted by senior Nick Chubb as he finished with 109 yards, and it marked his 20th career game of at least 100+ rushing yards, that trails only the legendary Herschel Walker (28) in school history. Chubb’s career rushing total is 3,904 and that ranks second in school history behind Walker too.

*Blankenship Booming It Again: Sophomore PK Rodrigo Blankenship gave Georgia a 3-0 lead with a 38-yard field goal in the first quarter as he is now 5-for-6 this year in field goal attempts. Also, he entered the game with a streak of 14 consecutive touchbacks on kickoffs dating back to his final one at #24 Notre Dame this season in week two. The streak ended at 18 as he had four touchbacks before the Vols returned his fifth kickoff of the afternoon for 21 yards. He managed touchbacks on five of his seven kickoffs today.

*For Starters: Sophomore wideout Riley Ridley made his first career start. Senior Dyshon Sims got the start at right guard (6th of his career) after Solomon Kindley injured an ankle in the second half of last week’s win over #17 Miss. State. Kindley had started the last two games at RG. Today, Kindley came in on the third series of the game. Sophomore QB Jacob Eason returned to action in the fourth quarter as he had been out since the first quarter of the season opener against App State.