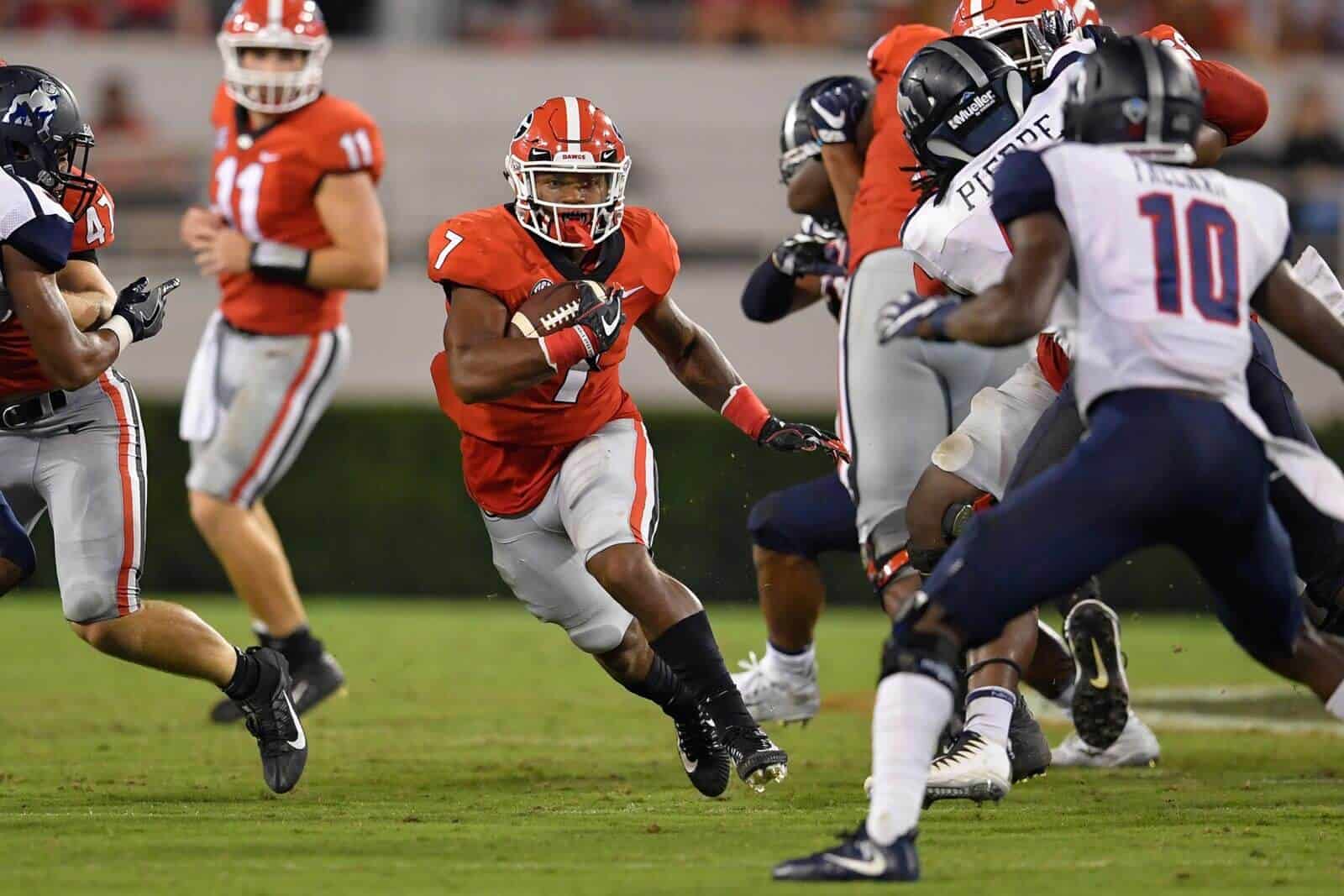 ATHENS, Ga. – Senior running back Nick Chubb rushed for 131 yards and two scores, freshman quarterback Jake Fromm hit 8-of-13 passes for 165 through the air and the Bulldogs from Athens moved to 3-0 with a 42-14 victory against Samford Saturday evening.

In front of a capacity crowd of 92,746 at Sanford Stadium, the Georgia defense was also impressive as it continued its strong start to the 2017 season. The Bulldogs, paced once again by Roquan Smith’s six tackles, held Samford to 249 yards of total offense.

“We’ve made some improvements in some areas, but we’ve got more improving to do,” head coach Kirby Smart said. “It’s frustrating with some of the decision-making and the lost yardage plays. If we continue to improve, we can be a good football team. It’s a good group to be around. They do what we ask them to do. They are continuing to grow.”

Georgia scored on its second offensive possession of the game thanks to a 10-play, 87-yard drive that included just two pass plays — one coming on a 5-yard touchdown reception by Mecole Hardman. That TD was the first of Hardman’s young career.

Up 7-0, the Georgia defense forced another three-and-out. The Bulldogs took advantage and scored in just 27 seconds. The two-play drive consisted of a 47-yard completion to Riley Ridley, followed by a 32-yard touchdown run from Chubb.

Fromm and Terry Godwin then connected on a 51-yard score — the longest of Godwin’s career — to put the Bulldogs from Athens up 21-0 with 10:32 left in the first half.

Georgia withstood a Samford surge the rest of the second quarter to take a 21-7 lead going into the locker room. Samford’s only score came on a 10-play, 75-yard drive that resulted in a 9-yard TD pass from Devlin Hodges to TaDarryl Marshall.

“I was a little disappointed at halftime,” Smart added. “Samford had a momentum swing just before the half and give them credit for that. In the second half, we made a stop, got a turnover, the young quarterback showed he’s growing up and we cashed in.”

The Bulldogs from Birmingham started the second half with the ball, looking to get back in the game. Instead, Hodges fumbled, Georgia recovered and then Chubb went 14 yards over left tackle on the next offensive possession to put UGA up 28-7.

On Samford’s ensuing drive, Smith busted through the offensive front and made a big stop on 4th-down to set the Georgia offense up at the Samford 45-yard line. The Bulldogs capitalized as Godwin reeled in a 9-yard TD pass to put the home team ahead 35-7.

Georgia added a score from D’Andre Swift and the Bulldogs went on to defeat Samford by a 42-14 final.

Next up, Georgia hosts Mississippi State in a nationally-televised game on ESPN next Saturday at 7 p.m. ET inside Sanford Stadium.

*Chubb Hits Century Mark In First Half: Senior TB Nick Chubb tallied 13 carries for 108 yards and a touchdown in the first half and for the game finished with 16 carries for 131 yards (8.2 avg) and 2 TDs.  This was Chubb’s 19th career time with 100 or more yards, which ranks second in school history (Herschel Walker, 28).  Chubb scored on a 32-yard run at the 1:45 mark in the first quarter after freshman QB Jake Fromm opened a hole with a block on linebacker Dorsett Johnson.  Chubb then went in from 14 yards in the third quarter.  Chubb now has 33 career rushing touchdowns, which ties Garrison Hearst for fourth on the school’s all-time list.  This marks the 11th time in Chubb’s career that he has had two rushing touchdowns in the same game.

Chubb’s first scoring dash came after Fromm hit sophomore WR Riley Ridley for a 47-yard catch on the opening play of the drive.  This was the shortest drive (two plays) and quickest drive (27 seconds) for the Bulldogs this year. The Bulldogs had 459 yards of total offense (284-rushing, 175-passing).

*Fromm & Firsts: Sophomore WR Mecole Hardman hauled in his first career touchdown from Jake Fromm to put Georgia up 7-0 in the first quarter.  A second first came from freshman TB D’Andre Swift who scored his first rushing touchdown on an 11-yard run to give the Bulldogs a 42-7 edge.  Swift finished with nine carries for a career-high 54 yards and one TD.  Fromm also connected with junior WR Terry Godwin for a 51-yard score (a career long for each).  These were Fromm’s third and fourth touchdown passes of his career.  Fromm finished 8-of-13 for 165 yards and a career-high three touchdowns.

Fromm’s primary target on Saturday was Godwin.  He finished with four catches for a career-high 98 yards and two touchdowns, also a career high.  Current Denver Bronco Isaiah McKenzie was the last Bulldog to have two touchdown catches in one game versus Missouri in 2016.

*Series History: With tonight’s 42-14 win, Georgia improves to 3-0 overall and 2-0 all-time against Samford.

*Defense Flexes: In the first quarter, Georgia held the Bulldogs to 16 yards (14 passing, two rushing) as Samford held the ball for only 3:38.  Then in the second period, Samford registered 105 yards and scored a touchdown on two trips to the Red Zone.  Georgia stalled Samford’s final drive of the half as redshirt sophomore J.R. Reed blocked a 36-yard field goal.  This is the first blocked field goal for the Bulldogs since Ray Drew blocked one versus Georgia Tech in 2014. Overall, Samford finished with 249 yards of total offense. (22-rushing, 227-passing) Junior ILB Roquan Smith led the team with six tackles while senior OLB Lorenzo Carter had four stops, including two sacks. Freshman ILB Monty Rice had a career-high five tackles.

*Long Drive: The Bulldogs scored their first touchdown at the 3:48 mark in the opening period after starting at their own 13-yard line.  This 87-yard scoring drive on 10 plays is the longest for Georgia this year after going for 86 yards versus App State and having an eight-play scoring drive on another possession versus the Mountaineers.  Jake Fromm connected with Mecole Hardman on a 3rd-and-goal situation from the 5-yard line.

*Starters: Redshirt freshman RG Solomon Kindley started for the first time while junior LG Kendall Baker started for the second time in his career (also got the nod at Notre Dame).  On defense, sophomore DB Tyrique McGhee got his first career start.

*Turnovers:  The Bulldogs collected a fumble and gave up a fumble versus Samford.  The Bulldogs are now -2 in Turnover Margin this year.  Opponents have converted five miscues into 17 points and Georgia has scored 7 points off three turnovers.  Jake Fromm fumbled at the 4:58 mark in the first quarter to give Samford the ball at the Georgia 25.  Samford had a field goal blocked on the ensuing possession.  It marked Georgia’s first Red Zone stop this year after three touchdowns and two field goals were scored by the opposition in 2017.  Senior N John Atkins wrestled away a loose ball on Samford’s first possession of the second half.  Nick Chubb scampered in from 14 yards out after Georgia got the ball.

*Next Up: The Bulldogs (3-0, 0-0 SEC) host Mississippi State (3-0, 1-0 SEC) next Saturday at Sanford Stadium at 7 p.m.  ESPN will televise the matchup. It will be the first of eight straight SEC games for the Bulldogs.

On preparing for Samford’s offense:
“We got lots of reps. We ran two huddles with the scouts. They are faster than anyone we’ve gone against. The benefit is we’ll see
more speed teams with bigger receivers and bigger linemen. Their quarterback is special; he’s frustrating.”

On the win:
“I was a little disappointed at halftime. Samford had a momentum swing just before the half and give them credit for that. In the
second half, we made a stop, got a turnover, the young quarterback showed he’s growing up and we cashed in.”

On his team:
“We’ve made some improvements in some areas, but we’ve got more improving to do. It’s frustrating with some of the decision making and the lost yardage plays. If we continue to improve, we can be a good football team. … It’s a good group to be around.
They do what we ask them to do. They are continuing to grow.”

On Mississippi State:
“They have a tremendous program. They have a physical football team and they have a quarterback who can run and throw. They’re
hard to defend. They make you defend all over the field. It will be an exciting game. … It will be two top-25 teams and that’s what
the SEC is all about. It will be a great environment and our fans can create an atmosphere to help us be successful.”

On the defense:
“The defense has confidence in the system. They’re playing really hard and physical and we haven’t had a lot of injuries. We’ve been
able to develop some depth and that helps with the spirit and the camaraderie when a lot of people get to play. If you play hard,
you’ve got a chance. Throw in good players and that makes it easier.”

On Jake Fromm:
“Jake Fromm is a bright kid who knows where to go with the ball. He makes good decisions most of the time and he’s growing up as
a player.”

On his most memorable play from the game…
“Me blocking for [Nick] Chubb’s [14-yard touchdown run] when he scored. You come out here every day at practice and see what he
can do, a little bit at practice because we’re not fully tackling. But come out here on Saturday and you know that Chubb’s gonna get
it and what he’s gonna do. But when he does the things that he does, that’s special. That’s the best ‘back in the nation.”

On head coach Kirby Smart’s evaluation of the team’s performance…
“As a team, we’re all happy we got the win, but there’s a lot of things we can go back, watch film and work on, because we know we
can do a lot better than what we did tonight. So just little things we’ve got to work on.”

On holding Samford to 4 of 11 conversions on third downs, including 6 three and outs…
“Three and outs are amazing. We love them, but like I said, we play teams where everybody’s got good players. They recruit and do
a pretty good job. We played a good team and they’re gonna win a lot of games in their league. They’re gonna make plays and
you’ve gotta live with it.”

On starting the SEC schedule…
“I feel like this team has a lot of confidence. We’ve been building it since offseason workouts. We have confidence in our players,
confidence in our coaches, so we’re just gonna keep grinding and playing the way that we’ve been playing.

On Samford quarterback Devlin Hodges…
“He’s an NFL-type quarterback. He put the ball in some good spots, especially on the slants–he put them low where we couldn’t get
to them. We expected that. We expected him to get the ball out quick and quick little short routes, we expected we just had to rally
and tackle.”

On his first career field goal block…
“I just told DeAndre Baker when we go, I’m gonna go block this kick. We just blocked the whole left side and I told him, ‘I’m gonna
go get it,’ and I went and blocked it.”