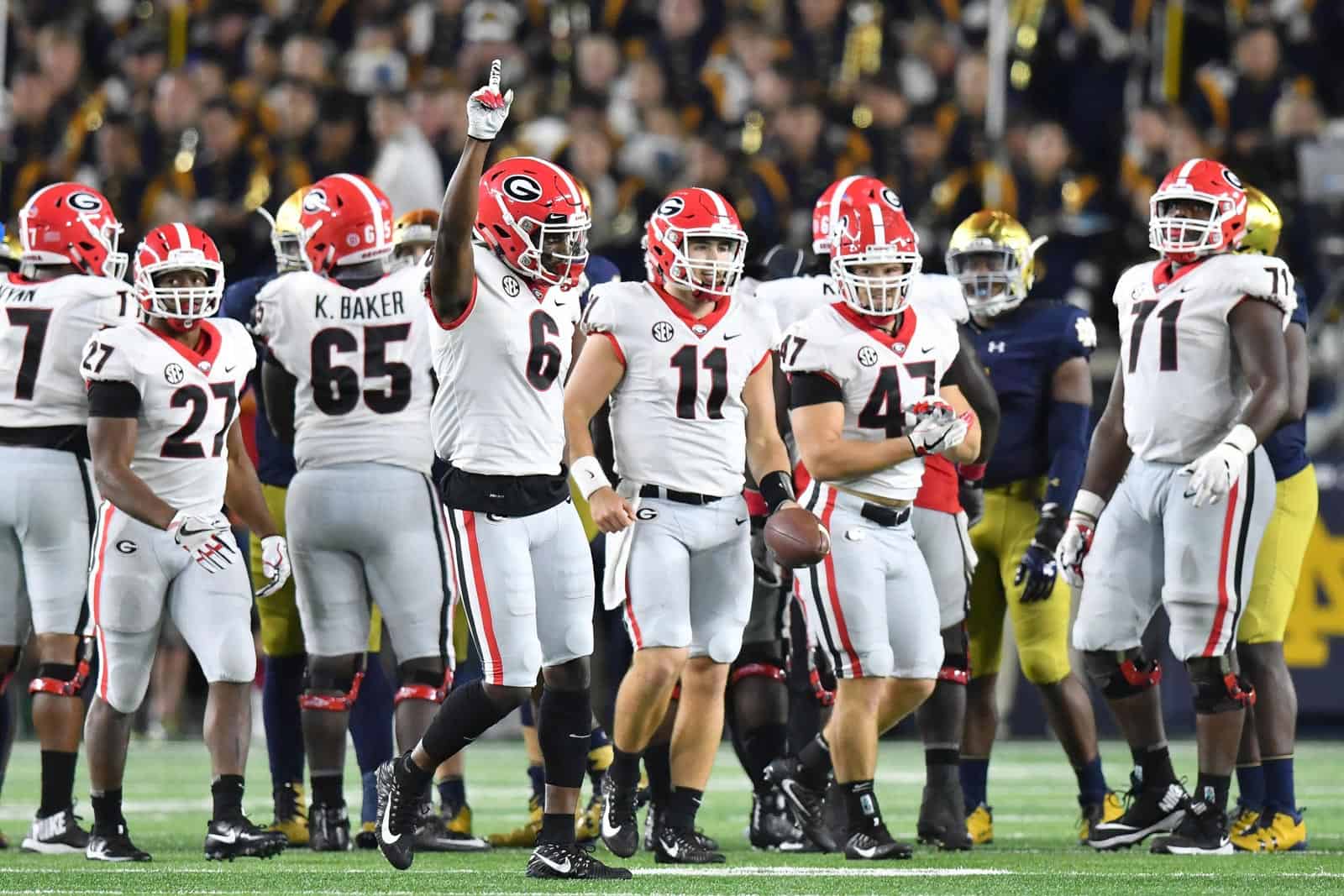 SOUTH BEND, Ind. – A stifling defensive effort and an established ground attack by the 15th-ranked Georgia Bulldogs paved the path for a 20-19 victory over No. 24 Notre Dame Saturday night in front of a crowd of 77,622 at Notre Dame Stadium.

With less than two minutes remaining, the Fighting Irish had an opportunity to put together a potential game-wining drive, however the Bulldogs forced its second turnover to put the game away. On 1st-and-10 from the ND 36 yard line, senior outside linebacker Davin Bellamy caused a sack-fumble on Notre Dame quarterback Brandon Wimbush and fellow senior outside linebacker Lorenzo Carter recovered the fumble. With no timeouts remaining for Notre Dame, a few kneel downs sealed the Georgia victory.

Defensively, the Bulldogs held the Fighting Irish to 266 total yards (211 passing, 55 rushing) and limited ND to 3-for-17 on third down conversions. In his first career start, true freshman Jake Fromm, a native of Warner Robins, Ga., went 16-for-29 for 144 yards and one touchdown. Georgia amassed 326 total yards of offense with 141 coming through the air and 185 yards on the ground.

“I didn’t say nothing to them (defense), Coach Tucker handled that,” Georgia head coach Kirby Smart said. “He had those guys playing hard. They played hard for him. They love him, and they played relentless. We’ve got to clean things up. We’ve got a good football team, but you talk about sloppy. Penalties, penalties, turnovers, turnovers. Can’t do that. I’m just so happy for these fans. We brought 40,000-some fans down here, and these guys are awesome.”

At the half, Notre Dame held the 13-10 advantage with each defense limiting the respective offense. Georgia held the Fighting Irish to 27 rushing yards and 114 yards passing. The Bulldogs tallied 86 yards on the ground. Fromm was 8-for-15 for 69 yards with one touchdown and one interception.

The Fighting Irish notched the first touchdown in the second quarter to go ahead 10-3, however Georgia fought right back on the subsequent possession. From five yards out, Fromm floated the ball up to the back-corner pylon for Godwin who reeled in a spectacular one-handed catch.

The Bulldogs took their first lead of the game, 17-16, at the 4:34 mark in the third quarter when Michel punched it in from 6 yards out on the ground. The drive featured a 40-yard dash from freshman D’Andre Swift and two personal foul penalties by Notre Dame.

The seesaw battle continued as the Fighting Irish went up 19-17 at 11:08 in the fourth quarter, but Blankenship booted a 30-yard field goal to regain the lead with 3:34 left to play in the contest. Blankenship’s third field goal decided the game.

Georgia is back at home in Sanford Stadium next Saturday, Sept. 16, against Samford. Kickoff is scheduled for 7:30 p.m. and will air on SEC Network Alternate.

In head coach Kirby Smart’s first season, Georgia rallied back for five victories when they trailed in the fourth quarter, beating No. 22 North Carolina in Atlanta, on the road against Missouri and Kentucky, home versus Auburn and against TCU in the Liberty Bowl (Memphis, Tenn.). Tonight marked the sixth time in the Smart era the Bulldogs have a fourth-quarter comeback.

*Series History: With tonight’s 20-19 win, Georgia is now 2-0 all-time against Notre Dame. The only other meeting came in the 1981 Sugar Bowl in New Orleans, a 17-10 Georgia win. The Bulldogs are scheduled to play host to Notre Dame in Sanford Stadium on Sept. 21, 2019.

*Road Win Over Ranked Team:  Before tonight’s 20-19 victory, The last time Georgia went on the road and beat a ranked team on its home field came during the 2014 season when the No. 13 Bulldogs blanked No. 23 Missouri in Columbia 34-0. Georgia did open the 2016 season with a win over #22 UNC in the Chick-fil-A Kickoff game in Atlanta.

*Defense Leads To Victory: Sophomore DB J.R. Reed had a career-high nine tackles to lead the team followed by big games by junior LB Roquan Smith with seven tackles including a sack while senior OLB Lorenzo Carter registered seven tackles, a sack, two forced fumbles and two fumble recoveries.  Davin Bellamy forced a fumble on a sack and it was recovered by Carter to secure the victory.Notre Dame was 0-for-10 on 3rd down conversions with 6:22 left in the 3rd quarter and finished 3-for-17. Last week, they tallied 422 yards on the ground in the win over Temple but tonight were held to just 55.

*Rushing Attack: Georgia tallied 185 rushing yards highlighted by senior tailbacks Sony Michel with 73 yards and Nick Chubb with 63 yards. Chubb’s first carry covered 30 yards. Also of note, senior fullback Christian Payne notched his first career carries with two for 11 yards. Coming in tonight, Payne had 12 career catches for 119 yards and one TD plus four tackles on special teams. Freshman D’Andre Swift finished with 42 yards including a career-high 40-yard scamper that helped set up the go-ahead TD. Michel ran in for six yards for a TD to tie the contest with 4:34 and Rodrigo Blankenship’s PAT gave Georgia its first lead at 17-16. The scoring drive covered 75 yards on seven plays in 1:48.

*TD For Godwin: Georgia capped a 12-play, 62-yard drive in 5:39 with a 5-yard acrobatic TD catch by junior receiver Terry Godwin from Jake Fromm. It tied the game at 10-all with 6:45 left. It was Godwin’s first TD catch since the 2016 TaxSlayer Bowl win over Penn State, and that one covered 17 yards. Tonight, he had two receptions for 36 yards.

*Points Off Turnovers: Notre Dame scored 7 points off two turnovers, while Georgia got no points off 2 turnovers. In the 2nd quarter, Notre Dame turned a Jake Fromm fumble at the UGA 32 eventually into a TD. With 26 seconds left in the first half, Fromm threw an INT as the Irish took over at their own 47 and were forced to punt. In the 3rd quarter, Bulldog senior OLB Lorenzo Carter recorded a sack, forced fumble and recovered it at the Notre Dame 47. It led to a punt. Georgia forced a fumble on a sack with 1:27 left by senior Davin Bellamy, recovered by Carter to secure the win. The Bulldogs are -2 in turnover margin this year, and opponents have scored 17 points off the miscues.