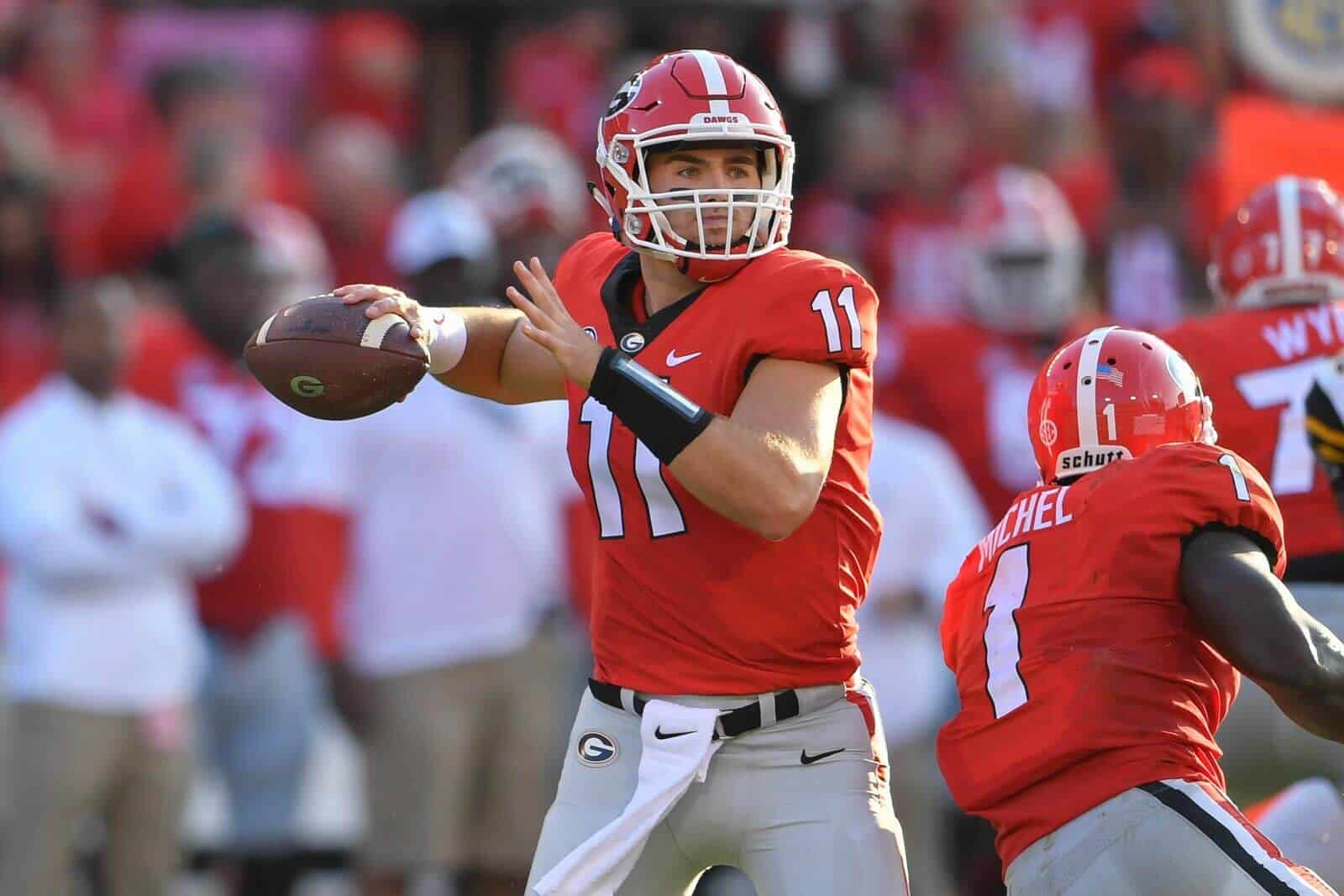 ATHENS, Ga. – A solid debut from true freshman quarterback Jake Fromm and a stout defensive effort led the 15th-ranked Georgia Bulldogs to a 31-10 season-opening victory in front of 92,746 at Sanford Stadium on Saturday night.

Fromm, a native of Warner Robins, Ga., finished with an efficient 10-of-15 passing for 143 yards and one touchdown. He was aided by senior running backs Nick Chubb and Sony Michel, who combined for 183 yards and three scores.

The Georgia defense was equally impressive in its 2017 debut. The Bulldogs held the Mountaineers to just 94 yards in the second half and 284 total on the day.

“That was a long time coming for our kids,” head coach Kirby Smart said. “They’ve worked really hard. We have a lot of respect for Appalachian State. Our team played really hard in the second half. Our kids were persistent. We talked about chopping wood and keeping it going.”

Following an injury to starting quarterback Jacob Eason on the third possession of the game, Fromm took the reins of the Bulldog offense. The rookie looked sharp, leading Georgia on a 4-play, 39-yard drive on the next possession, which was capped off by Chubb’s 1-yard touchdown run.

Fromm and senior wide receiver Javon Wims then connected on a heave to the end zone, resulting in a 34-yard touchdown pass to put the Bulldogs up 14-0 early in the second quarter.

“We didn’t have to make a lot of adjusting,” Smart added. “Jacob and Jake have similar qualities. Jake’s a good player and we’re excited about what he can do. Jake managed the game well. We’ll keep working to get him better.”

The Bulldog defense, which finished the half by holding the Mountaineers to 190 yards of total offense, held once again to set up Georgia’s next score. This time, it was a 6-yard touchdown plunge from Michel that put his team up 21-0 going into the locker room.

That balanced trend continued in the second half as Georgia scored on its first two offensive possessions – one coming off a 23-yard field goal from Rodrigo Blankenship, followed by an 8-play, 66-yard drive that resulted in Chubb’s second touchdown run of the game.

Appalachian State added two late scores with under six minutes remaining in the game, but Georgia improved to 94-27-3 all-time in season-opening games with the 31-10 victory.  The Bulldogs have now won 18 of their last 21 openers and are 2-0 in opening games under Smart.

Statistically, Georgia was paced by Chubb’s 15 rushes for 96 yards and two touchdowns, while Michel had 16 rushes for 87 yards and one touchdown. Junior defensive tackle Trenton Thompson and junior linebacker Roquan Smith led the Bulldogs in tackles with six a piece.

The Bulldogs return to action next Saturday, Sept. 9 at Notre Dame. Kickoff for that contest is scheduled for 7:30 p.m. ET in South Bend, Ind., with the game set to air on NBC.

*Chubb, Michel Attack: Senior tailbacks Nick Chubb and Sony Michel combined for 183 yards and three touchdowns to pace Georgia’s attack.  Chubb had 15 rushes for 96 yards and two TDs while Michel had 16 rushes for 87 yards and 1 TD. Chubb scored the game’s first touchdown to give Georgia a 7-0 lead at the 0:39 mark in the first quarter and then ran into the end zone in the third quarter to make it 31-0.  He now has 31 career rushing touchdowns, which is sixth on the school’s all-time list.

Michel’s performance included a 44-yard run that set up Georgia’s second touchdown of the game.  He also scored his 18th career rushing touchdown to give UGA a 21-0 edge in the second quarter.  One play after Michel’s 44-yard run, true freshman QB Jake Fromm connected with senior WR Javon Wims for a 34-yard touchdown catch.  Wims finished with three catches for 81 yards and a score.  This was Fromm’s first career touchdown pass and second TD catch for Wims after he recorded a 4-yard score in the 2016 Liberty Bowl.

*Getting Defensive:  The veteran Bulldog defense held the Mountaineers scoreless and without a trip to the Red Zone in the first three quarters.  The last time Georgia held an opponent without a point in the first half was at South Carolina last year.  The Bulldogs led 14-0 and went on to win 28-14 against USC. App State’s lone TD came after an INT that resulted in only a 21-yard drive. Georgia junior DT Trenton Thompson and junior LB Roquan Smith led Georgia in tackles with six apiece. Redshirt sophomore DB J.R. Reed had a sack, a forced fumble and five tackles.  Reed redshirted last season after playing his freshman year in 2015 for Tulsa.

*Firsts: Following a first quarter injury to starting QB Jacob Eason, true freshman Jake Fromm got his first action at the 6:30 mark in the opening period.  He completed his first career pass, an 8 yarder to sophomore TE Isaac Nauta.  Fromm finished 10-for-15 for 143 yards and one TD.  Another first was sophomore Mecole Hardman grabbing his first career pass, also an 8 yarder.  Hardman switched from defense to offense in the offseason.  He also added a 23-yard kickoff return versus App State.  Freshman D’Andre Swift caught a 5-yard pass from Fromm for his first career catch as well in the first quarter and finished with three catches for 18 yards and six carries for 31 yards.

On special teams, junior Nick Moore handled all snaps on punts in the first two quarters.  Senior SN Trent Frix snapped on the extra points for the Bulldogs.  Frix snapped for redshirt sophomore Rodrigo Blankenship who hit a 23-yard field goal and was 4-for-4 on PATs.

*New Specialist: Georgia featured a new punter versus the Mountaineers.  Graduate transfer Cameron Nizialek punted five times for an average of 43.8 (long of 53) with Moore snapping.  Nizialek also handled holding duties for the Bulldogs on field goals and PATs.  Nizialek punted for three years at Columbia University before transferring after earning a degree in economics.

*Starters: True freshman Andrew Thomas started at RT.  He is the first true freshman to start on the offensive line for Georgia since John Theus in 2012.  Sophomore DL Tyler Clark, sophomore DB J.R. Reed and redshirt sophomore LG Pat Allen also started for the first time in their careers.

*Points Off Turnovers: App State converted two interceptions into 10 points. The first INT thrown by graduate Brice Ramsey turned into a TD with 5:41 left in the contest to avoid a shutout. QB Taylor Lamb scampered in 20 yards to cap a 3-play, 21-yard drive to make it 31-7. ASU notched another INT off Ramsey with 1:49 left in the game and managed a field goal to make it 31-10 with 26 seconds left. Georgia did not force any turnovers.

*Injury Report: Sophomore QB Jacob Eason left the game at the 6:30 mark in the opening period.  He sustained a knee injury on an Appalachian State sideline hit that was ruled a personal foul.  Eason finished 1-for-3 for 4 yards.

On the win:
“That was a long time coming for our kids. They’ve worked really hard. We have a lot of respect for Appalachian State. Our team played really hard in the second half. … Our kids were persistent. We talked about chopping wood and keeping it going.”

On Jacob Eason:
“We’re not sure how long Jacob is going to be out. We don’t know the extent or how long.”

On Jake Fromm:
“We didn’t have to make a lot of adjusting. Jacob and Jake have similar qualities. Jake’s a good player and we’re excited about what he can do. Jake managed the game well. We’ll keep working to get him better.”

On the defense:
“Coach (Mel) Tucker did a tremendous job and the kids played hard for him. He’s so passionate. We just kept executing.”

On Notre Dame preparation:
“We’ve got a huge game next week. That’s a great opponent on both sides of the ball and in the kicking game. … We’ll make it simple for the players. We’ll go out and get ready to go play. Notre Dame is a good football team, a great program. We’re excited for the opportunity. We’ll get prepared because it will be a physical, tough game.”

On the young players:
“We’re still not where we need to be. We don’t have enough depth at some positions. When players get an opportunity to play, what are they going to do? We need more people playing winning football when we put them in the game.”

On the offense’s performance…
“We did a good job today. There’s definitely stuff we’ve gotta clean up, but overall I’m proud of everybody. They fought hard.”

On sophomore quarterback Jacob Eason’s injury…
“Obviously, (Jacob Eason) is one of our brothers. You never like to see that for a guy. We’re all gonna rally around him and it’s going to be good.”

On freshman quarterback Jake Fromm’s performance…
“We’ve practiced so hard and those guys get a lot of reps, so Fromm came in and he did a great job. We knew he was gonna do good for us and he’s a good player, so we were excited.”

On Sony Michel running the ‘Wild Dawg’ formation…
“Sony’s running the ball pretty good, so why not just give it to him direct and let him do his thing? It depends on how the game’s going, who’s had a good game and how that goes.”

On Javon Wims’ performance…
“Javon showed out. I enjoy seeing him go up and get the ball and playing more physical than he has been. I love for him to put on a show and I’m here for him.”

On Jake Fromm’s performance…
“Jake came in and did his thing. You can’t complain about that. I think we prepared Jake to do what he did in practice and what he did today out here on the field.”

On the defensive performance…
“We just keep working, ‘cause we won’t stop. We’ve gotta keep staying together because if we don’t, something else could happen.”

Confidence heading into next week…
“The confidence is in the game plan our coach has for us and how we practice Monday through Thursday … As long as we stay together at practice, understand what we have to do as a unit and as a defense, and our offense is gonna hold our back.”