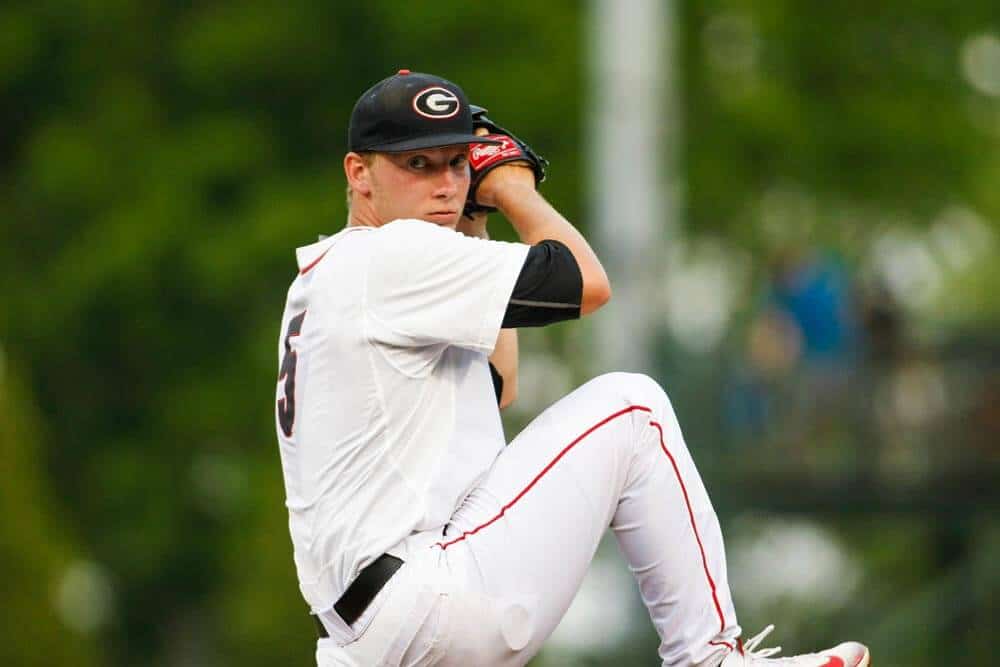 COLUMBIA, S.C. – Georgia defeated No. 30 South Carolina 6-3 Thursday at Founders Park to clinch a spot in next week’s SEC Tournament.

Georgia (24-30, 10-18 SEC), winners of seven of its last nine games, got a tremendous pitching performance from senior Andrew Gist, who tied his career-high by tossing eight innings. The Bulldogs grabbed a 4-0 lead in the second courtesy of a two-out rally. Freshman Austin Biggar made it 1-0 with an RBI-single to deep shortstop. Then, freshman Tucker Bradley followed with a two-run double off the wall in left field. Georgia’s final run scored courtesy of a passed ball.

South Carolina (31-22, 12-16 SEC) ended Gist’s shutout bid in the seventh when Justin Row drew a leadoff walk and scored on a one-out double by Jonah Bride. The Bulldogs got the run back in the ninth when Biggar singled and scored on a base hit by freshman Cam Shepherd (3-for-5). Junior Keegan McGovern followed Shepherd with an RBI-single to make it 6-1. Georgia’s offense collected 14 hits on the night.

Gist provided eight innings, allowing just one run on three hits with a walk and five strikeouts to improve to 3-4. He faced just 28 batters on the night. Freshman Zac Kristofak took care of the ninth but not before the Gamecocks scored two runs on two hits for the final. USC junior Wil Crowe fell to 5-5, surrendering four runs on eight hits with nine strikeouts in 6.2 innings.

Georgia’s win coupled with Tennessee’s loss to Missouri clinched Georgia place in the 12-team SEC Tournament, slated for May 23-28 in Hoover, Ala. Georgia will play next Tuesday with the opponent and time of the game to be determined in the next couple of days. Teams are seeded 1-12 based on conference winning percentage with the division winners assured of the top two seeds.

The South Carolina series continues Friday with first pitch set for 7:02 p.m. and available on SEC Network+ and the Bulldog Sports Network from IMG.

Dawg Tracks
*Senior Andrew Gist tied his career high with eight innings pitched for the win to move his record to 3-4. He pitched eight innings in a 3-1 road win over #19 Ga. Tech in 2016.
*Freshman Austin Biggar gave the Bulldogs a 1-0 lead with a two-out RBI single in the 2nd. He finished 2-for-4.
*Freshman Tucker Bradley made it 3-0 in the 2nd with a two-out, two-run double, his seventh of the year. He ended up 2-for-5.
*Freshman Cam Shepherd registered his team-leading 16th double including 12th in SEC action to start the fifth frame. He finished 3-for-5 and has a team-high 19 multi-hit games.

Coach’s Corner: Ike Cousins Head Baseball Coach Scott Stricklin
“We’re playing really good baseball right now and this was our best game of the year. It was good to add to our lead late because you never know and South Carolina rallied in the ninth. I thought Andrew Gist was outstanding. I’m proud of him tonight and all season how he’s handled pitching the first game of an SEC series. I’m proud of this team. I think back to three weeks ago when we’re headed to play fourth-ranked Kentucky, it’s cold and raining and Friday morning we get the call to ask about moving the game up to an afternoon start. We agreed to it and then we won that game and found a way to win the series, and we’ve been playing really well since that day.”