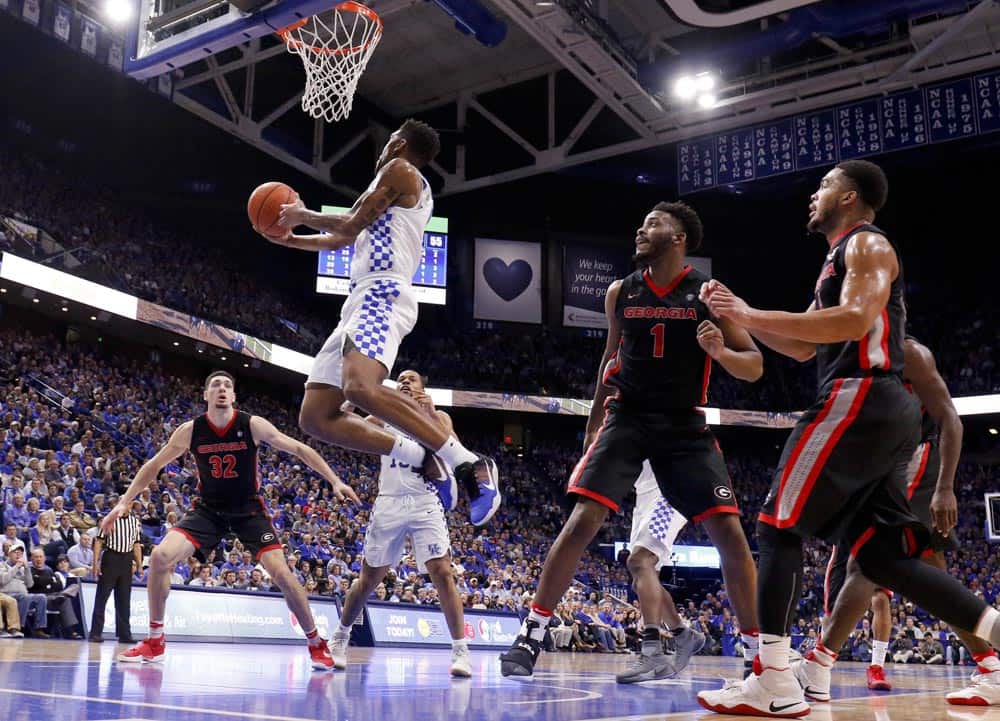 LEXINGTON, Ky. – The Georgia Bulldogs took the No. 8 Kentucky Wildcats to the wire but ultimately fell 90-81 in overtime Tuesday night at Rupp Arena.

With 1:46 left in the second half, Georgia (13-9, 4-5) captured a two-point lead, 73-71, on a Jordan Harris 3-pointer and continued to hold that same advantage in the waning seconds but a jumper by UK’s Malik Monk with eight seconds left in regulation sent the game into overtime. The Wildcats (18-4, 8-1) started extra time with a layup and a three, which paced them in outscoring the Bulldogs 14-5 in the deciding period to seal the win.

“It was a very good basketball game and our kids really competed hard,” Georgia head coach Mark Fox said. “You are never going to play a perfect game when you compete your tail off but you make enough plays to give yourself a chance to win. You have to complement the other team too. (Malik) Monk got really hot and hit contested shots including the one that got them into overtime. And you got to tip your hat to the kids because those kids really played well too but it was a really good game.”

In the first half, Georgia jumped on the Wildcats quickly as the Bulldogs scored the game’s first 12 points and connected on the team’s first six field goal attempts. Harris sank a trey to give Georgia a 14-point lead, its largest of the game, at 19-5 with 14:07 on the clock in the first half. However, Kentucky erased the gap to tie the game at 29-all heading into the half. Frazier led all scorers with eight points.

The Wildcats obtained their first lead of the game, 33-31, early in the second half and strengthened it to as high as eight points with 7:30 left to play but Georgia kept fighting back. The Bulldogs’ late run started when Harris converted a 3-point play from the line to cut Kentucky’s lead to 66-63 at the 5:32 mark. With less than four minutes in regulation, Frazier notched the game up at 70-all with a layup.

“I thought we got a little bit fatigued,” Fox added. “We didn’t rebound the ball well tonight and the second chanced points really hurt us. But again we had a chance to win it and you have to tip your hat to their team.”

The Bulldogs continue their road slate with a game against South Carolina Saturday in Columbia, South Carolina. The tip is scheduled for 2 p.m. ET and will be televised on ESPN2.

Opening Statement…
“I thought it was a really good, hard fought college basketball game. I have to give Kentucky’s team credit for competing their tails off and making big plays. Monk, you have to give him credit. He made some guarded shots and he obviously was the big difference in the game. Give him credit because that was an outstanding performance by him.”

On trying to stop Monk….
“We held him to one basket, I think, in the first half and we gave him some free throws, which I thought, in the first half, we gave him some free throws in transition that might get him started. He just got rolling. So we tried some different things. You have to give a great player credit. I’m not faulting our team. Our team competed hard. Their kids made more plays tonight then we did and they made enough to win.”

On the crowd at Rupp…
“I don’t think they scored. We had a great crowd and it lifts up their team but I don’t think they scored. We have great respect for their fan base. What impacted the game the most was Malik Monk shooting the ball in. We didn’t rebound great in the first half. Kentucky did a lot of things to win the game, as we did too. They do have a great crowd but I think the biggest factor is the players.”

On Monk’s game-tying shot and Georgia’s defense…
“He (Monk) shot it over a big, athletic guy and I thought we defended it pretty well. He made a contested shot. Again, let’s give him credit.”

On when Monk gets going…
“We have respect for him. He’s a great player. You saw how he played against Carolina. We knew, obviously, he might be super aggressive with the other kid out, and we talked about that with our team before the game. I thought in the first half we did a good job of containing him. The second half we just couldn’t find an answer.”

On the zone Kentucky played…
“Well I did think that, for a minute, it kept the ball away from Yante Maten, but we anticipated some zone. They zoned us a little bit in the tournament last year. We were prepared to see a little bit of zone but we got off to such a great start and we made our first five or six shots. You know that’s not going to last forever. That zone changed the tempo enough to get them back in the game.”

On how his team fought back…
I was real proud of our team and how they competed today. Some nights you can play your tail off and when the other kid makes the plays that they made you gotta say, ‘give their kid credit’ throw him good ballgame and move on. I was proud of how our team competed. They gave us a chance to win, and he just made the last shot to get it to OT.”