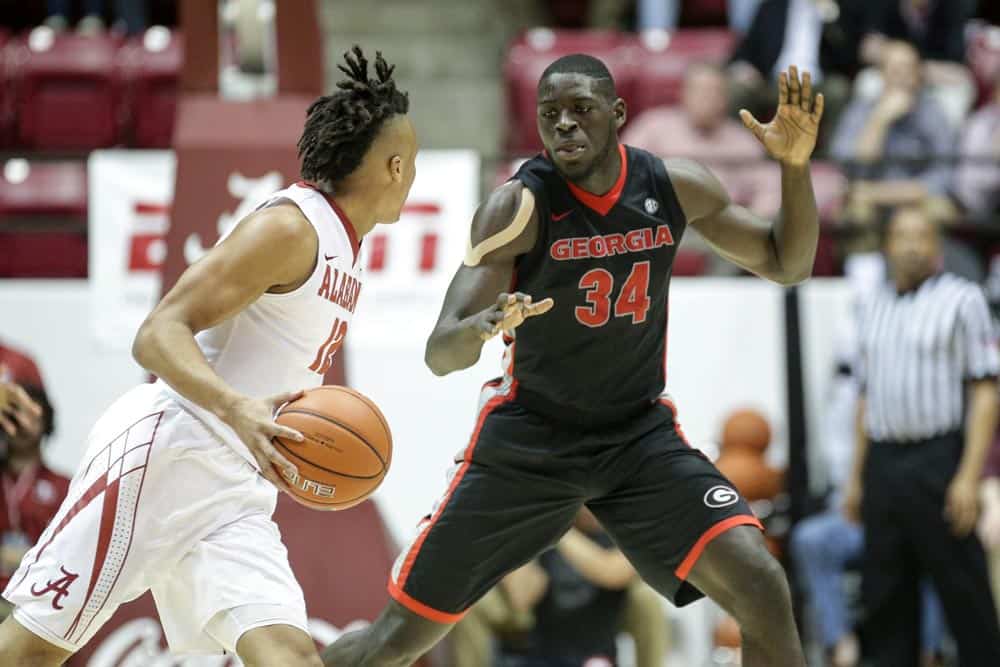 TUSCALOOSA, Ala. – J.J. Frazier scored 17 of his 28 points in the second half as the Georgia Bulldogs took down Alabama, 60-55, Thursday night at Coleman Coliseum.

Frazier scored 11 of Georgia’s final 12 points as the Bulldogs (16-12, 7-8 SEC) grabbed the lead at the 18:25 mark in the first half and never surrendered it. Juwan Parker added nine points and five rebounds for Georgia.

“We have great character on this team,” said Georgia head coach Mark Fox, “and it showed today. Obviously, we had a very difficult loss at home versus Kentucky, and lost [leading score Yante Maten], but we got together and decided that there will be a solution. We figured out a couple of new wrinkles and maybe a new rotation to try and patch it together, and they bought in and competed their tails off tonight. We beat a good Alabama team, and it’s a great win for our kids.”

The Bulldogs were led by their defense in the first half, as Alabama (16-11, 9-6) put home a buzzer-beating dunk to tie the fewest points (18) it has scored in a first half this season. In the game’s first ten minutes, the Bulldogs jumped out to a 14-4 lead behind four points apiece from Frazier and William Jackson, as well as a strong defensive effort. During that stretch, the Crimson Tide went just 2-of-16 (12.5-percent) from the floor, including missing its first seven attempts behind the three-point line.

After cutting Georgia’s lead to 19-13, Alabama went on another scoring drought, this time spanning nearly four minutes without a point. Frazier led the Bulldogs in scoring in the first period with nine points, while Derek Ogbeide contributed seven points and nine rebounds in the game’s first 20 minutes. Georgia took a 30-18 lead into the break.

About four minutes into the second half, Alabama began a 15-4 run to tighten Georgia’s lead to just two, but three-point field goals by Tyree Crump on back-to-back possessions got the Bulldogs’ lead back up to six. Following Crump’s jumpers, Frazier scored Georgia’a next 11 points, never allowing the Crimson Tide to get closer than one-point down each time they chipped away at the lead. The margin wavered between one and three from the 7:48 mark until a Frazier free throw with 29 seconds to go made it four. Parker hit one from the charity stripe with four seconds left to seal the victory.

Overall, Georgia held Alabama to just 21-of-63 shooting (33-percent) and only turned the ball over seven times, one greater than its season low of six.

The Bulldogs will return home to take on the LSU Tigers on Saturday. Tip-off is set for 6:00 p.m. and the game will be televised by the SEC Network.