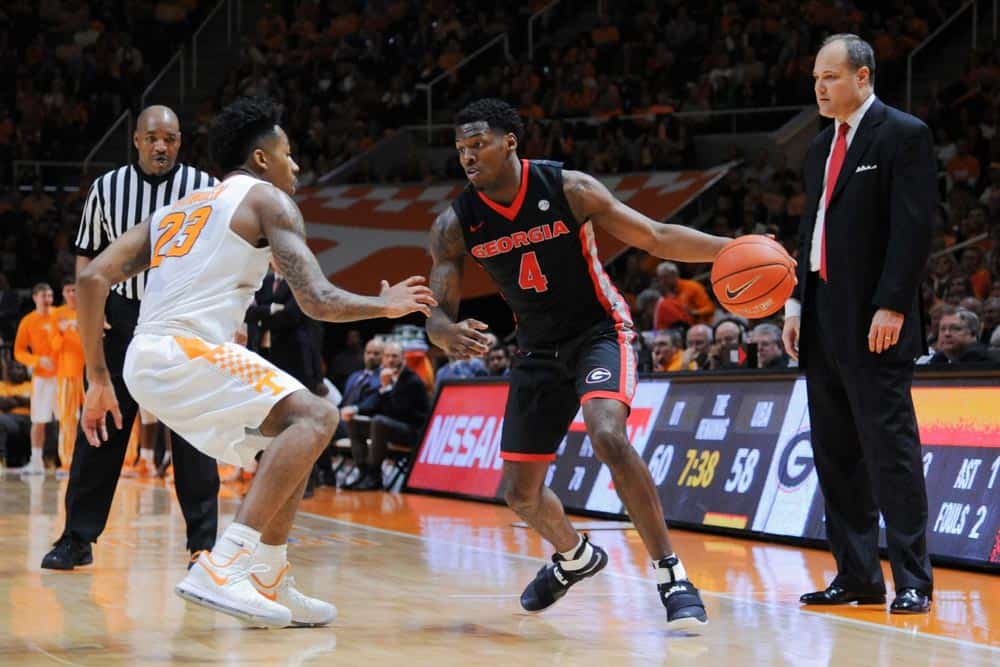 KNOXVILLE, Tenn. – J.J. Frazier scored a season-high 29 points and had six assists as the Georgia Bulldogs pulled out a 76-75 win over Tennessee at Thompson-Boling Arena Saturday.

“We got it done because J.J. Frazier loves playing for this school,” said Georgia head coach Mark Fox. “J.J. just refused to give in, and he did what seniors do: he led the fight. Then we had other guys contribute. Derek [Ogbeide] inside defensively, he and Mike [Edwards] rebounded the ball, and Tyree came in and made some threes… You can go on down the line, but it started with [Frazier] leading the fight.”

The Volunteers took a two-point lead into halftime, leading 36-34. Frazier led Georgia scorers after the first half with nine points on 4-of-8 shooting. As a team, the Bulldogs knocked down a trio of three-pointers in the first period and led the rebounding margin, 18-14, at the break.

Yante Maten picked up his fourth foul less than four minutes into the second half defending Williams in the post. Maten had seven points and four rebounds at the time, but headed to the bench in the middle of a 17-5 Tennessee run. Frazier hit several shots in the half’s first five minutes, scoring eight of Georgia’s ten points in that stretch. On the next two trips down the floor, Frazier found Derek Ogbeide and E’Torrion Wilridge for buckets and then hit a jumper of his own to cut the lead to four.

The second half saw its first tie after a pair of Frazier free throws with 8:21 to go. Maten checked back into the game with just over five minutes remaining and picked up his fifth foul on the ensuing possession. The Bulldogs took their first lead of the second half at the 4:08 mark, and a three-pointer from Crump with 2:22 left made the lead six. Tennessee was able to cut it to two, but Frazier hit a layup and a free throw to seal the win.

Georgia will return home to face the Bulldogs of Mississippi State on Tuesday at Stegeman Coliseum. Tip-off is set for 9 p.m. and the game will be televised by ESPNU.