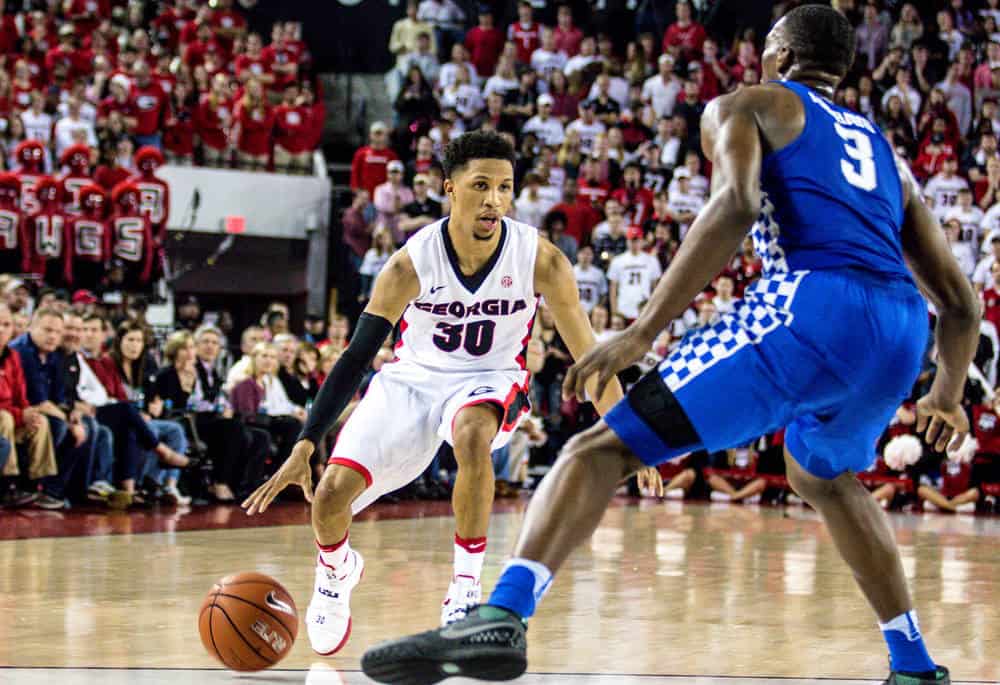 With 2:22 left in the second half, Frazier hit a 3-pointer to grab a two-point lead for the Bulldogs at 71-69. Kentucky’s freshman guard De’Aaron Fox answered with a layup at the other end but a pair of free throws by Frazier regained the advantage for Georgia. Fox notched the game for the 12th time at 73-73 with 1:09 remaining. The Bulldogs’ next possessions fell empty and the Wildcats (22-5, 12-2) capitalized with points to pick up the win.

Georgia went without its leading scorer for the whole game as junior forward Yante Maten suffered a right knee injury in the second minute and did not return.

Frazier’s 36 points registered as the most by any player this year against Kentucky. The senior guard has three career 30-point performances. Aiding in scoring was Juwan Parker and Mike Edwards with 10 points apiece and Pape Diatta with nine. Sophomore forward Derek Ogbeide snatched team-high 11 boards, his 11th double-digit rebounding game.

From the tip, Georgia went by the beat of Frazier as he put in the first eight Bulldogs’ points starting with a highly contested floater on the first possession. Frazier drained a pull-up trey at the buzzer from the top of the key to send Georgia into the half down by two points, 33-31.

Kentucky opened up the second half with four unanswered points but Georgia countered with seven of its own, all by sophomore forward Mike Edwards. The last came on the receiving part of a pick-and-roll with Frazier that Edwards slammed in for the Bulldogs’ first lead of the second half. The Wildcats regained the advantage the next time down the floor but Georgia’s William Jackson II notched it at 40-all at the 14:16 mark.

With a little over five minutes remaining in regulation, Diatta sank a three to put the Bulldogs up 64-61. The Wildcats and the Bulldogs’ seesaw affair continued as each lost and retook the lead three times in the following three minutes. Georgia held the lead with 55 seconds left after Frazier made a layup but Kentucky pulled away down the stretch.

The Bulldogs shot 51-percent from the floor, while the Wildcats sported a 43-percent clip shooting. However, Kentucky outrebounded Georgia 41-26.

Up next for Georgia is a road contest on Wednesday against Alabama in Tuscaloosa. The tip is scheduled for 7 p.m. and will be televised on ESPN2.

On Yante Maten…
“I can not give you any information [on his injury]. Obviously, he had a significant injury and we will be praying for him.”

On the tempo of the game…
“That was something that was important for us coming into the game, and then when Yante went out, it became even more important… I think they were trying to wear us down, wear our bigs down, and out run us.”

“They were putting (J.J. Frazier) in pick-and-rolls. Mark (Fox) did a great job at the end. What he did was twisted pick-and-rolls, so he acted middle and the guy would flip on us and go the other way and that’s where (Dominique Hawkins) got caught two or three times. Hats off to Mark (Fox). Then I said, we don’t have time to talk our way through it and that’s where we started trapping. We were lucky to get out alive. Literally, lucky to win the game. Again, we rebounded the ball well and did some good things. Let’s be real though, Maten was out. Here’s what bothers me about this profession right now. What Mark (Fox) has been able to do here, and other coaches….He goes to Florida; overtime and should have won the game. He comes to us; overtime- should have won the game. I mean, we were lucky to win. Loses at Texas A&M because the clock stalled. The clock stalled and that’s why he loses the game. He keeps his team together and that’s coaching. Not when things are going good. It’s when things go south and you lose a bunch in a row and how do you get them and go? He goes to Tennessee down 10 and goes and wins the game. They had Florida beat with 30 seconds left, then they come in and do this to us without Maten. That’s what kind of coach Mark Fox is. So yeah, we want to win more but no kidding, we all want to win more. It’s about what kind of coach it is and what kind of man he is.”

On the team effort in this game…
“I think everybody felt that way. I couldn’t do it by myself, and I couldn’t have done it by myself. I’m proud of my teammates. They gave me everything they had, and I gave them everything I had, we just came up short.”

On playing without Yante Maten…
“They showed how tough we are. With him going down, other people really stepped up and we gave it what we had.”

On the frustrating loss…
“To be honest, any loss hurts, we all want to win, so when we don’t, it just hurts.”

On Kentucky answering…
“They are a good team. We tried to do everything, all the little things. It just didn’t work out today.”