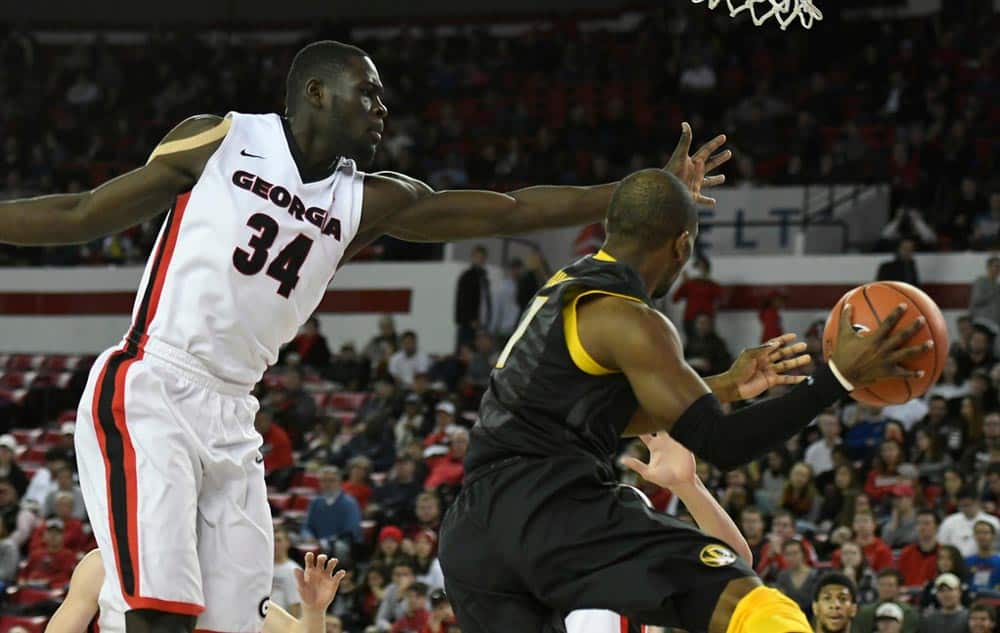 “Our crowd certainly lifted our team today,” said Georgia head coach Mark Fox. “I thank everybody that braved the cold weather and slick roads to come and support our team and these players. Our crowd and our students were just tremendous. It was a game where I felt like we brought the result of the last game into it and played flat in the first half. Then, everybody picked us up and we were certainly much better in the second half.”

Despite trailing at the half, the Bulldogs were able to hold Missouri (5-9, 0-2) to 10-of-33 (30.3-percent) shooting in the period, including just 3-of-16 (18.8-percent) from behind the three-point line. Maten had 10 points and six rebounds at the break to lead Georgia in both categories. 11 Bulldogs saw action in the opening half, with eight contributing to the offense with at least a point or an assist.

An 11-2 run by Georgia opened the second half to give the Bulldogs a 31-28 lead. A little over two minutes into the second half, Jordan Harris made a free throw, and on the ensuing inbounds pass, Frazier stole the ball and got fouled in the act of shooting. He converted both free throws to give the Bulldogs their first lead since the score was 1-0.

After briefly losing the lead when Missouri fought back, Georgia went on a 12-0 run to make it 65-54. Five Bulldogs scored during that stretch to help Georgia open up a lead they took with 7:04 left and would not surrender for the remainder of the game.

The Bulldogs will be back in action Wednesday as they travel to Oxford, Miss. to take on Ole Miss. The game is set for a 7:00 p.m. (ET) start and will be nationally televised by ESPNU.

• The Bulldogs then scored 51 second-half points, their third 50-point second half of the season following 50 vs. Morehouse and 53 at Auburn.

• Juwan Parker notched his fourth-straight double-figure scoring output and fifth in the last seven games dating back to the UL Lafayette game on Dec. 14. Prior to that game, Parker had one double-digit performance in his first 58 games played
at Georgia.

• Georgia won the rebound count, 44-35. The Bulldogs have outboarded their opposition in 12 of 15 games this season.

• J.J. Frazier equaled his career high with five steals. Frazier also had five steals at Auburn in the SEC opener on Dec. 29, against Auburn on Feb. 6 last season and against Ole Miss on Jan. 9 last season.

• Georgia scored 16 points off turnovers in the second half after not posting a point off a turnover in the first 20 minutes.

On today’s game…
“Our crowd certainly lifted our team today. I thank everybody that braved the cold weather and slick roads to come and support our team and these players. Our crowd and our students were just tremendous. It was a game where I felt like we brought the result of the last game into it and played flat in the first half. Then, everybody picked us up and we were certainly much better in the second half.”

On J.J. Frazier’s first half vs. his second half…
“He is a bit out of rhythm because he is trying to find the balance of how to make those young, inexperienced guys better and still score the ball himself. So he is just trying to balance that and it has gotten him a little bit out of rhythm. But I thought the good thing was, he didn’t take a bunch of bad shots and he tried to keep our team organized then ultimately he kinda got going in the second half. He knows and we know how well he has played in the last couple years and that will come back. He just is a little bit out of rhythm right now and we have to help him get some easier looks to get back in the grove.”

On Pape Diatta…
“Pape is getting better each week and I thought he was very effective today. He continues to work and make progress. The transition is hard, he’ll struggle some days with the amount of information that you have to read when you play but he is getting there and starting to get comfortable. Today he was able to shoot the ball in and I thought he was able to relax and play with some confidence. Obviously he was a big contributor.”

On the second half energy…
“It gave us motivation, early in the first half, I just wanted to see how they were playing in the zone. I kind of figured it out at the end of the half. I pressed more in the second half, I knew what I was looking for, and I started working.”

On sluggish start…
“We came out a little too lackadaisical, a little too cool. They played us heavy zone, so we couldn’t really get into a rhythm. We were second guessing passes and drives and stuff like that, but once we figured it out, we started to play better and more fluid.”

On the energy in the second half…
“There was a lot of energy in the building, on our team, the coaching staff, everywhere. It wasn’t hard to really find energy to play the game. Sometimes you got to get yourself riled up, but everybody was really riled up at that point during the second half.”

On today’s game….
“I was really proud of our guys. I thought we really played extremely hard in the first half, not necessarily well or during the whole game, but the players had a great deal of energy and emotion. The second half, we knew they would make a run and of course they did. I’m sure the run was fueled by what happened at the end of the first half. I thought their crowd was great during the second half. We withstood and we fought back. That tells me a lot about these guys and they’re a young group of guys and they continued to fight. I’m proud of my team. They fought hard against a good team but had too many fouls, which is something we have to work on.”