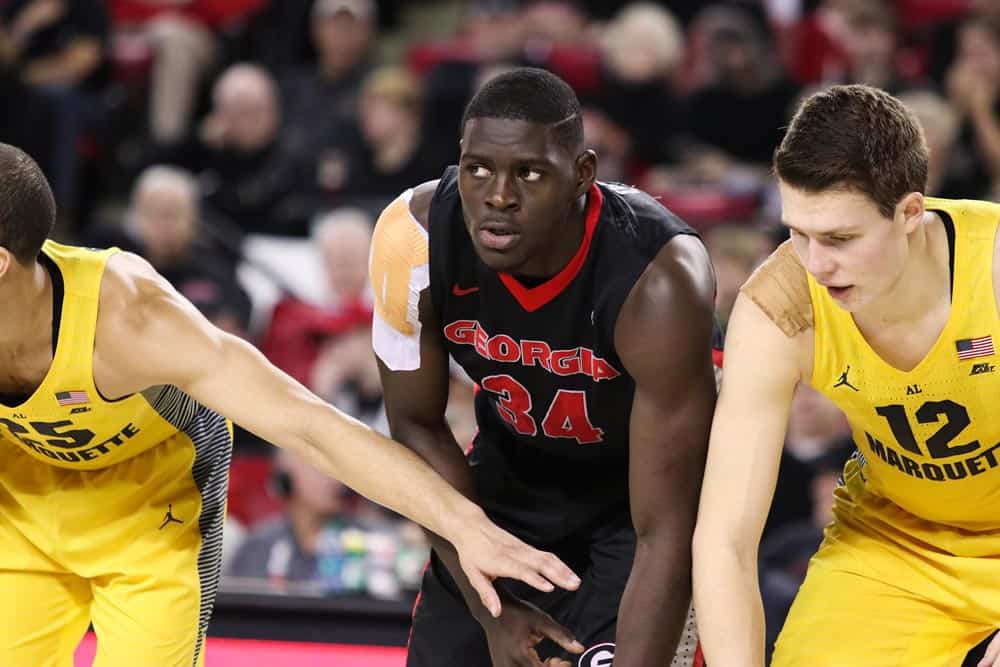 ATHENS, Ga. – The Georgia Bulldogs (5-3) could not tame the hot-shooting Marquette Golden Eagles (6-2) on Sunday afternoon in an 89-79 loss at Stegeman Coliseum.

The Bulldogs were as close as two points with a little more than seven minutes left in the second half but the Golden Eagles went on an 11-0 run to control and secure the win.

“Marquette has a very good offensive team and their offense is significantly better than our defense right now,” said Georgia Head Coach Mark Fox. “We didn’t defend the three-point line, did not rebound the basketball, we had too many deadly turnovers that turned into points on the other end, and the combination of those three things was certainly our demise today.”

Both teams came out exchanging points fast as the game featured four lead changes in the first five minutes. Marquette pulled ahead as far as 10 points, 27-17, at the 10:22 mark, but the Bulldogs exploded on a 13-3 run to notch it up at 30-all.

Frazier ignited the streak with a contested three-pointer at the top of the key followed by a breakaway layup off a steal. Frazier then closed the first half with a floater in the waning seconds to take Georgia into the break trailing 43-46.

Marquette opened the second half with its ninth three-pointer of the game en route to strengthening the Golden Eagles’ lead to 63-49 in just over four minutes. However, Frazier jumpstarted another Bulldog run with a trey followed by two free throws and an assist to Mike Edwards for a two-handed slam to bring Georgia within five points at 68-63.

A pair of free throws by William Jackson II cut the Bulldogs’ deficit to two points, but the Golden Eagles continued to answer. Marquette’s Sam Hauser made his fourth three-pointer of the game at the 5:35 mark to extend the Golden Eagle’s lead back to eight points at 78-70.

The Bulldogs shot a better clip at 49-percent compared to Marquette’s 46-percent from the field but it was the Golden Eagles’ 13 three-pointers that were the difference.

Georgia continues its homestand at Stegeman Coliseum Wednesday at 6 p.m. against the Louisiana-Lafayette Ragin’ Cajuns.

• The Bulldogs leaned heavily on junior forward Yante Maten to get the team going offensively, as the Pontiac, Michigan native had 11 of the team’s first 17 points.

• J.J. Frazier regained his rhythm from distance, going 4-for-6 from three-point range in the contest. Frazier entered today’s action on a 1-for-14 cold streak.

• Frazier and Maten both posted strong first halves, scoring 15 and 10 points, respectively, of the team’s 43 points. The duo combined for 10-of-14 shooting from the floor, with Maten a perfect 6-for-6, while the Bulldogs as a team were 16-of-32.

• Marquette opened the second half on a 19-6 run to seize a cushion, but Georgia countered with a 21-7 spurt to claw back within two at 7:06.

• This was the second time this season in which both Frazier and Maten went over the 20-point plateau, the last coming against Furman (Frazier – 28, Maten – 27).

On the challenges of defending Marquette…

“They certainly spread you out with their quality of shooting and they forced us to play small. Our big lineup couldn’t cover them, so we played small most of the day in an effort to try to slow the three-point shooting, which I don’t think we really ever did. We didn’t do the dirty work to win.”

On the play of the defense…

“We have some serious areas to work on. One of the things that Kenny Gaines and Charles Manndid is that they were terrific defenders. We haven’t replaced that. We haven’t replaced the defense that walked out of here with a degree. That’s disappointing to lose a game because you don’t defend like we need to.”

“They were a great offensive team. They run their sets well and with precision, and we knew that coming in. They made a couple of tough shots, but for the most part we gave them too much space.”

On trying to defend a three-point shooting team…

“Our bigs are used to covering in the paint, so its a little different when you always got to guard outside. For the guards, we should be used to guarding guys that shoot the three well. So from the guard standpoint, we got to do a better job of closing out and taking away the three point shot.”

“Defense, no matter how much you strategize against another team, it’s really about communication. I think we are talking to each other, we’re just not reacting enough when someone is telling you to go do something.”

On getting out rebounded…

“Rebounds are all about coming out, playing harder and getting in position. I think they were making a lot of their shots at the beginning of the game, so there weren’t a ton of rebounds for us to get, at least defensively.”