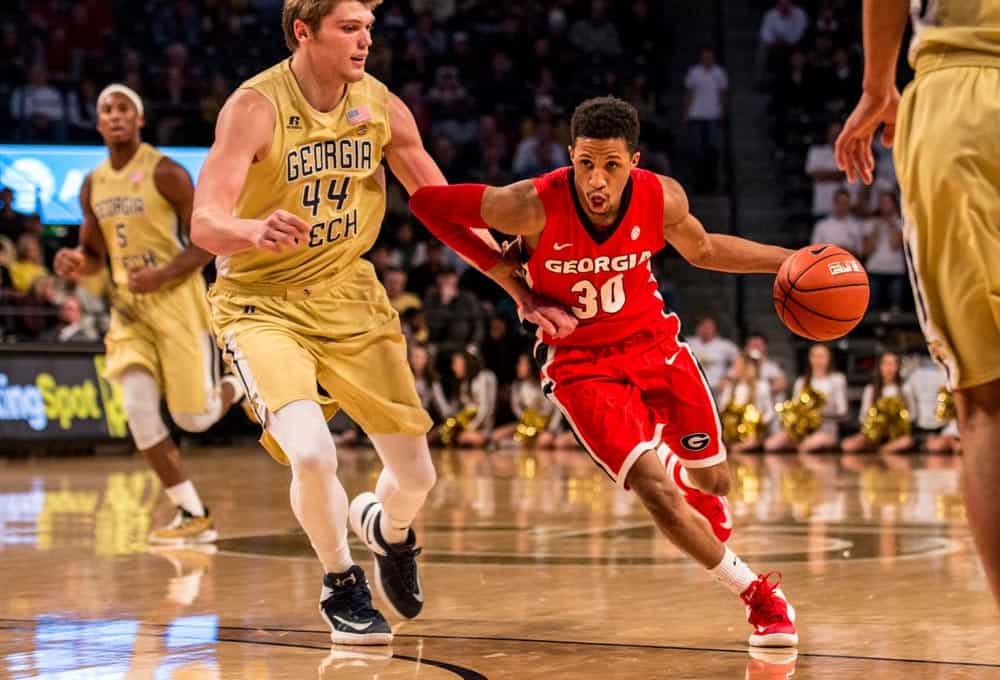 ATLANTA, Ga. – Yante Maten and J.J. Frazier spearheaded the Georgia Bulldogs (8-3) to a 60-43 victory over the Georgia Tech Yellow Jackets (6-4) Tuesday night at the McCamish Pavilion in Atlanta.

“Hard-fought emotional game,” said Georgia Head Coach Mark Fox. “I thought both teams showed the emotion of the rivalry game pretty early. We played a little sloppy early because of the rivalry game, which that often happens. But I was pleased with our win; we beat an ACC team on the road and a rivalry game. It was certainly a battle and we are pleased with the win.”

The Bulldogs led at the break 27-18 after holding the Yellow Jackets without a field goal for the final six minutes of the first half and scoreless for the last 2:41. Sophomore forward Derek Ogbeide made all five of his field goals from the floor to lead all scorers with 10 points while also adding seven rebounds and two blocks.

“Derek certainly seized the opportunity in the first half and was really a key part of why we had the lead at halftime,” Fox added. “He is a great rebounder and that is the advantage of having him next to Yante. He probably doesn’t get as many shot opportunities because he plays with such a great player but he continues to develop. Tonight he was very effective.”

Frazier opened up the second half with a transition three-pointer to give Georgia its largest lead to that point at 30-18. Georgia Tech quickly added three baskets to pull within six points at 30-24 but that would be the closest the Yellow Jackets would get.

Senior forward Kenny Paul Geno responded with back-to-back dunks. The first was a putback off a Maten shot while the other came a minute later when Jordan Harris found a cutting Geno from the baseline for a wide-open slam.

At the 12:19 mark, Frazier completed another 3-point play, this time an acrobatic layup and made foul shot, to give Georgia a 12-point margin at 42-30. The Bulldogs handled the game from that point forward. Frazier was 4-of-4 from the line, which elevated him to a school-record 81.7-percent career free-throw percentage.

The Bulldogs continue their road slate against Oakland Friday, Dec. 20, at 7 PM and will be televised on ESPN3.