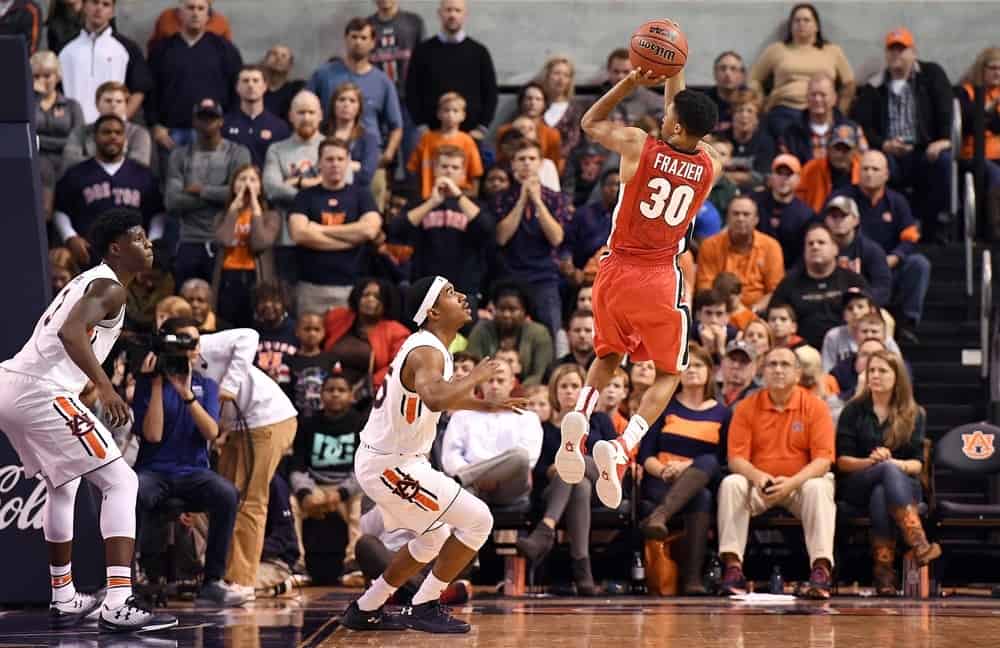 AUBURN, Ala. – The Georgia Bulldogs stormed back in the second half to down the Auburn Tigers 96-84 in the opening night of Southeastern Conference play Thursday at Auburn Arena.

Georgia (9-4) obtained its first lead of the game at the 6:21 mark of the second half on a Yante Maten hook shot to make it a 78-76 advantage. The basket was the second bucket in a 12-0 run that would give the Bulldogs a commanding 10-point lead, a lead they would not relinquish, in the whining minutes of the game.

“I thought our kids really decided it was time to get back to being what Georgia has been about for the last three or four years,” Georgia head coach Mark Fox said. “I didn’t think we guarded well before the break but I think we decided to really roll up our sleeves and get after it tonight. Give our kids all the credit for that effort in the second half.”

Maten notched his third 30-point game of the season, fourth of his career, as he poured in season-high 31 points and added eight rebounds. The junior forward went 10-for-19 from the floor including two from long distance and he converted 9-for-9 from the foul line.

Senior guard J.J. Frazier also registered had a season best scoring output as he tallied 27 points, nine coming from the free throw line. Frazier tied his career high of five steals, one of which he transitioned into a breakaway layup in the crucial late 12-0 run.

“He played very composed today,” Fox on Frazier’s play. “He doesn’t have to shoot threes to score. He also only had two turnovers and he had five assists. He played really well.”

The Tigers (10-3) led by as many as 13 points in the first half, however the Bulldogs narrowed the deficit to as little as three points before ultimately heading into halftime trailing by eight at 43-51. Auburn was 7-for-14 from three-point range in the first 20 minutes and shot 56 percent from the floor. Georgia stayed within striking distance by getting to the free throw line 21 times and converting 16 of those trips.

Georgia held the Tigers scoreless for four minutes in the midpoint of the second half while simultaneously going on a 10-0 run to cut the Auburn lead to one point at 68-67. After Auburn broke its dry spell, Georgia’s Jordan Harris completed a three-point play from the foul line to tie the game, 70-all, for the first time since the tipoff.

The Bulldogs had their best performance at the foul line as they went 29-of-38, both season highs. Contributing in scoring for Georgia were Harris and Juwan Parker with 12 and 10 points, respectively. Sophomore forward Derek Ogbeide chipped in nine points and six rebounds, including an offensive rebound and layup late in the contest.

The Georgia Bulldogs return home to battle the South Carolina Gamecocks after the New Year on Jan. 4. The tipoff is scheduled for 7 p.m. ET and will be televised on ESPNU.