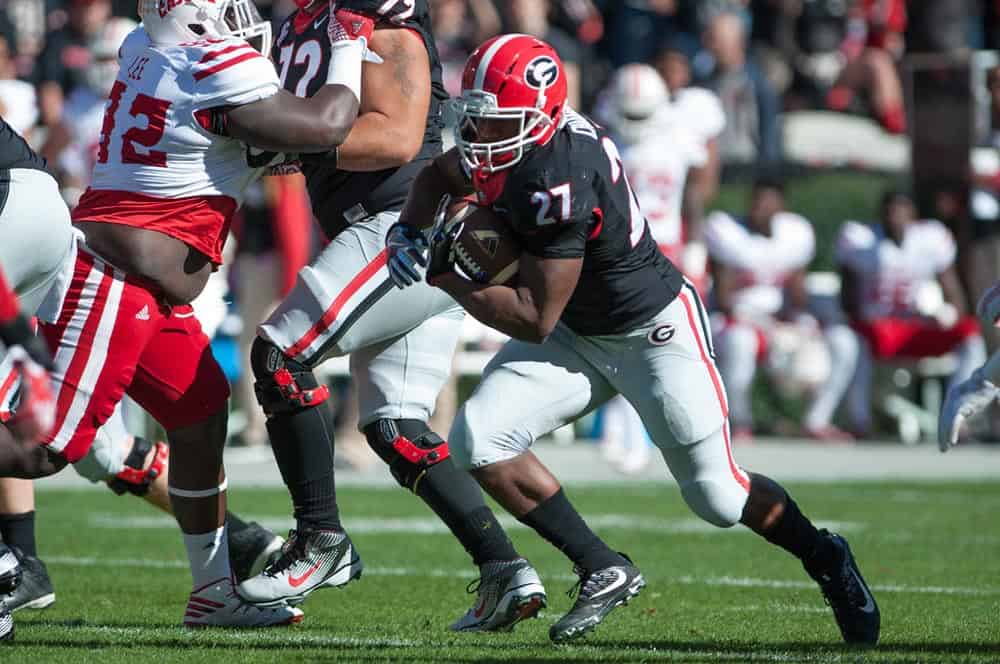 ATHENS, Ga. – Highlighted by a pair of Isaiah McKenzie touchdowns, the Georgia Bulldogs (7-4) bested UL Lafayette (4-6) by a score of 35-21 on Saturday at Sanford Stadium.

McKenzie quickly got to work, taking a handoff on the game’s opening play for a 55-yard touchdown run. It marked the first time since 2014 that the Bulldogs scored on their first play from the line of scrimmage, as McKenzie was set up by a 45-yard kickoff return from senior Reggie Davis.

The junior then ran a career-long 82 yard punt return to the endzone on his next touch, giving McKenzie a school-record five career punt returns for a touchdown while he moved to a tie for third in the SEC all-time with Vanderbilt’s Lee Nalley and Arkansas’ Joe Adams. The wide receiver finished the day with 164 all-purpose yards.

“I thought we had good juice coming out,” said head coach Kirby Smart. “Isaiah had the great run and the great punt return, and I thought the defense started off well…Early on, I saw kids playing tough, with effort, fast and aggressive. I loved the start and the energy.”

The running game continued to find success off of junior Nick Chubb, who tabbed his 17th 100-yard rushing game of his career with 108 against the Ragin’ Cajuns. Chubb was also a target for quarterback Jacob Eason with a receiving touchdown while Eason went 13-for-19 with 165 yards and a pair of touchdown throws.

The defense forced four UL Lafayette turnovers, including interceptions from sophomore Deandre Baker, senior Aaron Davis and junior Malkom Parrish. Sophomore Roquan Smith guided the Bulldogs with a team-best seven tackles while freshman Tyler Clark tallied a career-high five stops. As a unit, the defense held the Cajuns to 0-for-3 on fourth downs.

With McKenzie’s touchdowns in the opening quarter, Georgia built a 21-0 lead with 2:50 to go in the first half after a nine-yard touchdown reception from freshman Isaac Nauta. The drive was sparked by Reggie Carter forcing a Ragin’ Cajun fumble that Lorenzo Carter recovered at the visitors’ 45. However, less than a minute later, UL Lafayette put up its first score to end the half with a 21-7 lead for Georgia.

Out of the break, McKenzie was again the go-to man, hauling in a 26-yard pass to set up a one-yard touchdown run for Chubb. Leading 28-7 in the final quarter of action, Chubb found the endzone again, as Eason found the tailback for a 49-yard score. UL Lafayette closed the gap with two scores in the final 4:50, but could not climb back from the early deficit.

Georgia closes out the regular season on Saturday with Georgia Tech traveling to Athens for a noon ET kickoff on the SEC Network.

*Quick Strike: Junior WR Isaiah McKenzie took a handoff on the opening play of the game 55 yards for a touchdown. The last time the Bulldogs scored on their first play from the line of scrimmage was a 35-yard TD strike from Hutson Mason to Chris Conley in the 2014 Charleston Southern game. McKenzie’s 55-yard scoring scamper matches the length of Nick Chubb’s TD run in the win versus #22 North Carolina in this year’s opener. This was a career-long rush for McKenzie and this scoring run was set up by a 45-yard kickoff return by senior WR Reggie Davis. McKenzie finished with 164 all-purpose yards.

*And McKenzie Wasn’t Done: The second time McKenzie touched the ball, he returned a punt a career-long 82 yards for a touchdown, his first of the season. This punt return for McKenzie is the longest for the Bulldogs since Brandon Boykin’s 92-yarder for a score versus Michigan State in the 2012 Outback Bowl.

McKenzie set a school record with his fifth career punt return for a touchdown and moved into a three-way tie in the SEC all-time (VU’s Lee Nalley, ARK’s Joe Adams). He also now has six total returns for touchdowns (5 PRs, 1 KOR), which is a school record and is tied for third in the SEC (Nalley). McKenzie last had a rushing and a return touchdown in the same game at Auburn in 2015.

*Ground Attack: Georgia finished with 400 total yards with 235 of that coming on the ground. Junior TB Nick Chubb led the charge with 16 carries for 108 yards (6.8 avg.) and his sixth touchdown of the year. This marked Chubb’s 17th 100-yard rushing game of his career. It is also the 27th rushing score of his career, which ties him for eighth on the UGA all-time list with Robert Edwards and Tim Worley. For the fourth time in his career and first time since the 2015 Southern game, Chubb added a receiving touchdown. He put the Bulldogs up 35-7 after catching a career-long 49-yard TD from freshman QB Jacob Eason with 9:35 left. Eason finished the day 13-for-19 for 165 yards with 2 TDs and one INT. The Ragin’ Cajuns tallied 465 yards with 276 on the ground.

*Pick Party: Georgia finished with three interceptions on the day. On the Ragin’ Cajuns’ first offensive play, sophomore DB Deandre Baker recorded the second interception of his career and returned it 28 yards. This was Georgia’s 12th pick of the year. On UL Lafayette’s third drive, senior DB Aaron Davis had his second pick of the season and fourth of his career. The Bulldogs registered their third interception of the game late in the second quarter as junior DB Malkom Parrish made an acrobatic catch on the Ragin’ Cajun sideline.

*Points Off Turnovers: The Bulldogs are now +7 in Turnover Margin after registering three picks and a fumble recovery and giving up one interception and a fumble. Sophomore DB Deandre Baker had his second pick of the year and returned it 28 yards. Georgia was forced to punt after notching one first down on the drive. Senior DB Aaron Davis snagged his fourth career interception late in the first quarter. The Ragin’ Cajuns picked Eason off on the next drive. This halted a streak of 144 pass attempts for Eason without a pick. UL Lafayette went for it on a 4th-and-13 on the next drive and did not convert. At the 5:13 mark in the second quarter, junior ILB Reggie Carter forced a fumble that junior OLB Lorenzo Carter pounced on. Eason connected with freshman TE Isaac Nauta for a 9-yard touchdown on the following possession. Eason’s 12th touchdown pass was Nauta’s third of his career. During the half’s final minute, junior DB Malkom Parrish came away with his second interception of the year (fourth of his career). The Bulldogs ran two plays and then let the clock run out. Junior TB Sony Michel fumbled at the 12:37 mark in the fourth quarter on the Ragin’ Cajuns’ 20-yard line. UL Lafayette then got stuffed on a fourth down try on its next possession.

Overall, Georgia has forced 23 turnovers for 47 points while opponents have turned 16 Bulldog miscues into 59 points this season.

*Getting Defensive: In addition to the three picks and one fumble recovery, freshman DL Tyler Clark recorded a career-high five stops. Sophomore ILB Roquan Smith led the team today with seven stops, and he has a team-best 69 tackles on the year. UL Lafayette went for it on fourth down three times Saturday and was 0-3. Coming into the game, Georgia’s opponents were 6-for-11 on fourth down tries.

*Starters: Junior OG Dyshon Sims started his first game of 2016 and the second of his career in place of junior Isaiah Wynn. This broke a 23-game starting streak for Wynn, which was second best behind senior C Brandon Kublanow’s 36 straight games.

*Up Next: Georgia (7-4) closes out the regular season Saturday versus Ga. Tech here at Noon (SEC Network).

On the win…
“I thought we had good juice coming out. Isaiah (McKenzie) had the great run and the great punt return, and I thought the defense started off well. … Early on, I saw kids playing tough, with effort, fast and aggressive. I loved the start and the energy. I did not love the way it finished. We elected to play the subs and they did not execute well and that was disappointing.”

On Isaiah McKenzie…
“He does the right things. If we block it right and set him up, he gets positive runs. He’s a tough kid and we’ve gotten a lot out of him.”

On Nick Chubb…
“He runs hard and he’s hard to tackle. I’d hate to be one of the guys trying to get him on the ground. You’re going to feel it in the morning. Sony, too. They are great backs and I’m excited they were able to have a good game.”

On Jacob Eason…
“Decision making is the big thing. A couple of times, he made the wrong read and got sloppy with his footwork. He had some good throws, too, like the touchdown to (Isaac) Nauta. He continues to do good things.”

On Georgia Tech…
“We’ll have good, spirited practices and get after it. They have a unique offense that’s hard to simulate and hard to prepare for. We’re excited about the opportunity. It’s a great challenge and we need the players to totally buy into it. We have to prepare well and do a good job of tackling.”

On the win…
“It always feels good to get the running game going, but it feels better to get a win overall.”

On response to physical matchup…
“I think (we responded the right way). We could have been more physical and done some things a little better but overall we got the win and that’s all that matters. I’m looking forward to carrying the momentum on to next week.”

On touchdowns…
“It felt good. It’s good to score and I haven’t scored in a while. I owe it to everyone on the offense.”

On fifth career punt return for touchdown…
“I’ve been thinking about that since I heard about me being close to breaking it. As of today, they told me ‘you broke the record.’ But we’ve got to keep going and putting more numbers up.”

On defense helping offense…
“It’s very important to get them in good field position so Nick Chubb can do good things with the ball and stuff like that. We (want to) make it easy on them and every time they get the ball, put them in field goal position.”

On interception on first defensive play…
“The stadium was rocking once I made the interception. I made a good play on the ball.”