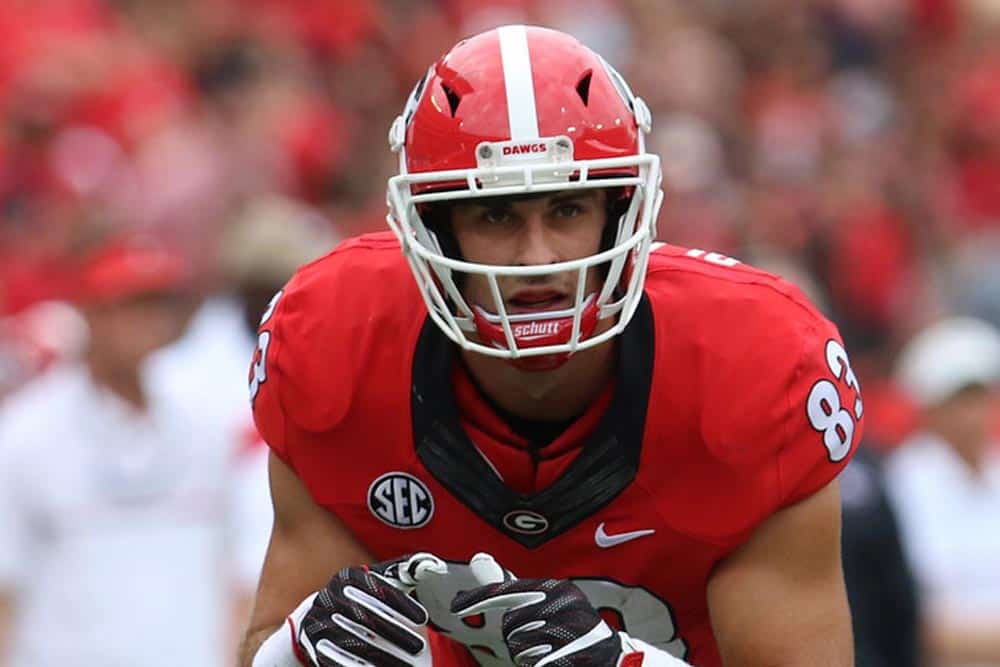 ATHENS, Ga. – Georgia junior tight end Jeb Blazevich has been named one of 11 semifinalists for the 2016 Wuerffel Trophy, which is given to a college football player with an exceptional history of community service.

Blazevich, a native of Charlotte, N.C., is one of three players from the Southeastern Conference included as a semifinalist for this year’s award. He was also recently named to the 2016 AFCA Allstate Good Works Team.

Current Kansas City Chief and former Bulldog Chris Conley was a 2014 finalist for the Wuerffel Trophy while Aaron Murray, who shattered many of the SEC quarterback records, was a finalist for the award in 2013.

Three finalists will be announced on Nov. 23 and the formal announcement of the 2016 Wuerffel Trophy recipient will be on Dec. 6 at the National Football Foundation’s press conference in New York City.

The Wuerffel Trophy recipient will be interviewed at “The Home Depot College Football Awards Red Carpet Show” on ESPNU/ESPN3 on Dec. 8 airing at 6 p.m. The presentation of the Wuerffel Trophy will occur at the 48th Annual All Sports Association Awards Banquet on Feb. 10, 2017, in Fort Walton Beach, Fla.

Blazevich was inducted into the UGA Athletic Association’s Leadership Education and Development (L.E.A.D.) program and has been active in a variety of community service activities. His service includes: working with “Learn, Play, Excel” to educate and provide leadership for elementary and middle school students; visiting Camp Sunshine and spending time with children who have cancer; volunteering for Countdown to Kickoff, a benefit for Children’s Healthcare of Atlanta, the Georgia Transplant Foundation and the UGA College of Education, and with Extra Special People, an organization assisting individuals with developmental disabilities and their families, among other charities.

On the field, Blazevich has started 28 games and played in all 34 games since starting his career in 2014. He has 37 catches for 466 yards and three touchdowns in his career.

The Bulldogs travel to Lexington, Ky., this weekend to face an SEC East opponent in Kentucky on Saturday night. SEC Network will televise the matchup at 7:30 p.m.