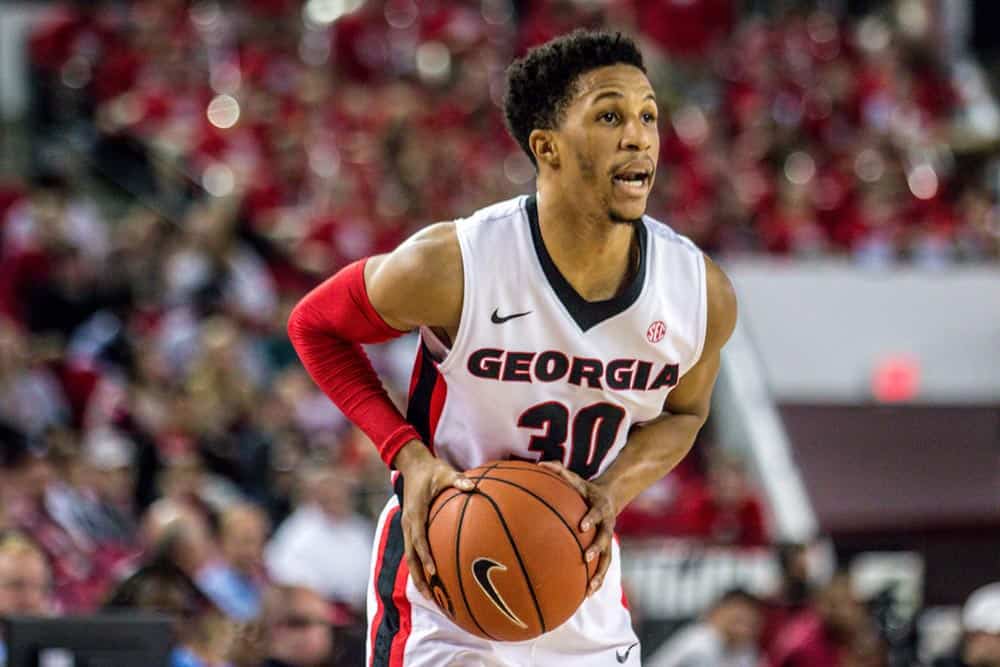 Yante Maten (19 points) and Frazier (18 points) led the way offensively for Georgia. The Bulldogs held UNC Asheville to just 33.9-percent shooting and won the rebounding battle 45-29 in the win.

“That was a hard fought game,” said Fox. “Obviously UNC Asheville was a tournament team last year, [and is] a team that knows how to play. We were very concerned about our ability to defend them, so at the end of the night, I was really pleased with how we did defend. It was a good win.”

Georgia, which did not trail at any point in the game, held its opponent under 50 points for the first time since a 71-48 win over Clemson on Dec. 22, 2015. In addition to the stellar defensive effort, the Bulldogs worked well together on the offensive end, notching assists on 17 of the team’s 22 made field goals in the game.

Just after the four-minute mark in the first half, Frazier collected a rebound following a Derek Ogbeide block and took it the length of the floor for a layup. Frazier, who led all scorers with 11 points at the break, had gone 3-for-3 at the free throw line on the previous possession. The Bulldogs ended the first period by holding UNC Asheville scoreless for the final three minutes and 12 seconds, and in that time, Frazier and Maten each knocked down shots from three-point range.

The Bulldogs continued to extend their lead in the second half, allowing UNC Asheville to score just 20 points in the period. Freshman Jordan Harris saw the first game action of his career in the half, scoring his first points on a second-half three-pointer assisted by Frazier.

Monday was the first of two games Georgia will play on campus in the opening rounds of the 2016 CBE Hall of Fame Classic. The Bulldogs will play host to Furman on Thursday before heading to Kansas City, Mo. for the championship rounds. Georgia will take on George Washington on Monday, Nov. 21 at 7:00 p.m. on ESPNU, followed by the game between Kansas and UAB. The following night, the consolation game will tip off at 7:30 p.m. on ESPN3, followed by the championship game at 10:00 p.m. on ESPN2.

• Frazier is now one of three active players in the SEC with 1,000 points, 250 rebounds and 250 assists, joining South Carolina’s duo of Duane Notice and Sindarius Thornwell. He is the third Bulldog to accomplish that feat under Coach Fox (Charles Mann, Dustin Ware).

• Freshman Tyree Crump and junior Pepe Diatta made their Stegeman Coliseum
debuts. Freshman Jordan Harris made his collegiate debut in the contest, and he connected on his first career FGA, a 3-pointer after just 46 seconds on the floor.

• Yante Maten’s 19 points gave him 18 consecutive double-digit games, and he has surpassed the 10-point plateau in 32 of his last 36 contests.

On tonight’s game…
“That was a hard fought game. Obviously UNC Asheville was a tournament team last year, [and is] a team that knows how to play. We were very concerned about our ability to defend them, so at the end of the night, I was really pleased with how we did defend. It was a good win.”

On balance in playing times and finding right rotations…
“Well, It’s going to be a process. These guys aren’t comfortable with what they are doing. We don’t have everything put in yet. The new players are seeing defense that they didn’t know existed a year ago and trying to cover offenses that they didn’t know existed a year ago. They have a lot to learn so it is going to take some time and we have to give them some time. Juwan (Parker) was much better today. Outside of the other day, he hasn’t played in a year and a half so there is a lot of rust to knock off. Eventually we’ll have to settle on a rotation but we have to get all these guys a chance to get comfortable.”

On time table on setting a regular rotation…
“We have to see how it evolves. We have to see what progress they do make. Some guys may take a step forward and some guys might not. But it is nice to have some depth, we are going to need some options. I think our players have been very patient with as many guys as we are playing. We will settle on it eventually, but we don’t have a timetable set.”

On having a height advantage…
“They were definitely playing all the inside plays. They were well scouted and knew what we were trying to do, so they pretty much tried to beat everything and make us play outside-in. But we still tried to make do with what we could get in the paint.”

On big edge in rebounding…
“Usually it’s about boxing out and going to get it. You can pretty much break it down to that right there.”

On having JJ being able to spark the team…
“Having guys like JJ and Yante, you know All-SEC guys, it’s awesome. Everyone might be off their game, but they can’t be, so it’s great to have that to fall back on.”

On overall performance….
“I was really happy with the way we took care of the basketball, certainly when looking at the turnover margin. We only turned it over 11 times and forced them in to 17. I was really happy with our ability to take care of the ball and how hard we were playing. We just couldn’t get anything to fall. Some of them were ill-advised shots, but for the most part, I thought we were taking open looks by guys that can shoot the basketball. Usually there is one guy that has an off night, but we had several that just couldn’t make shots. We are playing the game the right way. That was what I just told the team and I like what I’m seeing, I like where we are headed. We’ve got some things that we have to work through but we are playing hard, we are playing together. You never know how starting (Giacomo Zilli) hurts somebody else. Will Weeks for a couple of games, the scrimmage, the exhibition, VCU, and now all of a sudden, he’s coming off the bench. That effects you just a little bit. I still think it’s the right thing to do for our team going forward.”

On Georgia…
“You’ve got to give credit to Georgia. There were a couple times where I thought we were making runs and were right there in it and their two best players stepped up and made big shots.”