Defense lifts Georgia to 13-7 win against No. 8 Auburn

Defense lifts Georgia to 13-7 win against No. 8 Auburn 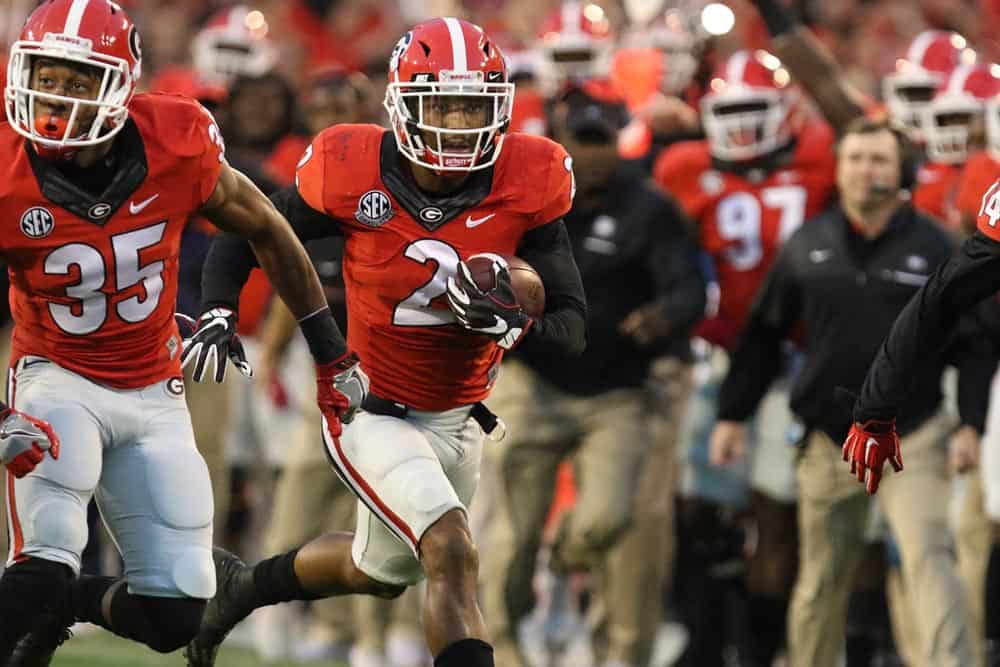 “That was more than team-wide, it was university-wide and fan-wide,” said head coach Kirby Smart. “The crowd noise at the end impacted the game. With less than two minutes, they could not convert and that was helped by the noise. These kids don’t have any quit in them. They fight.”

The win snapped the Tigers’ six-game winning streak and allowed Georgia to collect its second win over a top-25 opponent this season, as the Bulldogs opened the year with a win against No. 22 North Carolina.

The Bulldogs held Auburn to its lowest offensive output for the second time under Gus Malzahn, the first coming when the Bulldogs won 34-7 in 2014. The Tigers had been averaging 43 points per game over the last five contests coming into Saturday.

The defensive unit held the Tigers to 127 rushing yards, as the visitors have been averaging 494.1 yards coming into the contest. Auburn’s air attack posted just 37 yards, as its offense recorded 10 first downs in the contest, none in the second half.

Highlighting the defense was Maurice Smith’s pick six in the opening seconds of the second half, allowing Georgia to knot it up at 7 apiece. Roquan Smith led the defense with seven tackles followed by Jonathan Ledbetter and Malkom Parrish with five each.

The Bulldog offense found a balanced attack, as Nick Chubb led the ground game with 101 yards. The junior became the fifth Bulldog in program history to tally at least 3,000 yards in his career, as he moved to No. 4 on the list with 3,086 yards.

Jacob Eason went 20-for-31 with 208 yards, spreading the ball out with five receivers having at least two catches each in the first half and eight total for the contest. The freshman found fellow classmate Riley Ridley for a career-high 89 yards on three catches.

Auburn put up the lone score of the first half with a Kerryon Johnson three-yard rushing touchdown in the waning moments of the first quarter. Georgia wasn’t without its chances, getting into Auburn territory four times, but a turnover and penalties kept Georgia from connecting.

Smith changed that, though, with his 34-yard interception before Rodrigo Blankenship made a 45-yard field goal to put Georgia ahead 10-7 with 13:44 left in the game. Blankenship increased the Georgia lead to 13-7 with 2:25 to go, as his 11th field goal of the season came from 21 yards out.

Georgia needed to stop one more Auburn drive to wrap up the win. After a pair of four-yard receptions, an incomplete pass put the Tigers with 4th-and-2 and a pass breakup by Dominick Sanders sealed the win.

Georgia plays host to the Ragin’ Cajuns of Louisiana Lafayette next Saturday at noon ET on the SEC Network.

*Top 10 Win At Home: With Georgia’s 13‐7 win over #8 Auburn, the Bulldogs snap the Tigers six‐game winning streak and pick up their latest win over a top 10 team at Sanford Stadium. Before today, the last one to visit was #9 Auburn in 2014 and then No. 16 Georgia posted a 34‐7 win. Also, Georgia maintains the series edge over the Tigers, improving to 57‐55‐8 in the Deep South’s Oldest rivalry. Today was the 120th meeting and this ranks in a tie for fourth most played active series in the FBS. Also, this marked Georgia’s second win over a top 25 team this year for first‐year coach Kirby Smart after opening up with a win over then No. 22 North Carolina in the Chick‐Fil‐A Kickoff game in Atlanta. The Bulldogs improve to 6‐4 overall, 4‐4 in the SEC while Auburn is 7‐ 3, 5‐2 SEC. Georgia has won nine of the past 11 meetings versus Auburn.

*Getting Defensive: Auburn was held to just 7 points which matches a career low under coach Gus Malzahn with the Tigers, and the second time against Georgia as the Bulldogs won 34‐7 here in 2014. The Tigers had been averaging 494.1 yards per game this season and 43.0 points per game over the last five contests coming into Saturday. Auburn finished the game with only 164 total yards and was just 2‐for‐12‐on third downs. Under Malzahn, the Tigers were averaging 32.4 points in road games coming in to the contest.

Sophomore LB Roquan Smith led the team with seven stops to give him a team‐leading 62 for the year. Sophomore DE Jonathan Ledbetter led the charge with five stops, including a sack. Senior DB Maurice Smith had the biggest defensive play of the game with an interception that he returned 34 yards for a touchdown in the third quarter. An Alabama graduate transfer, Smith also had three tackles. The pick‐six was Georgia’s first since Dominick Sanders versus Vandy in 2015.

*Reviewing The Offense: Freshman QB Jacob Eason (20‐for‐31, 208 yards) spread the ball out with five receivers having at least two catches each in the first half and eight total for the contest. He connected with freshman WR Riley Ridley for a 57‐yard catch in the first quarter. This was a career‐long catch for Ridley and the true freshman finished with a career‐high 89 yards on three catches. Ridley also had his first career carry for 14 yards. Junior TB Nick Chubb finished with 23 carries for 101 yards. Chubb now has 3,086 yards in his career, making him the fifth Bulldog in history to tally at least 3,000 yards in his career and moves him to No. 4 on that list. The Bulldogs won the time of possession battle, holding the ball for 39:09 and tallied 343 yards of total offense on 76 plays.

*Blankenship Connects Again: Redshirt freshman PK Rodrigo Blankenship connected on a 45‐yard field goal to put Georgia up 10‐7 at the 13:44 mark in the fourth quarter. Blankenship then missed what would have tied his career long of 49 yards at the 10:21 mark. He added a 21‐yarder with 2:25 left in the contest to make it 13‐7. He is now 11‐for‐13 on the year and had made 10 in a row before his miss from 49.

*McKenzie Goes To Work: Junior WR Isaiah McKenzie took off for a 20‐yard punt return to put the ball at the UGA 45 in the fourth quarter. Coming in today, the Tigers led the nation in Punt Return Defense at ‐1.5 yards a return. In fact, Auburn had allowed a total of two punt returns coming into tonight’s game for ‐3 yards. He finished with just that one punt return. McKenzie added a team‐high four catches for 35 yards.

*Points Off Turnovers: The Bulldogs are +5 in Turnover Margin after giving up one turnover in the first half and recording one in the second half. Both turnovers turned into touchdowns. Sophomore WR Terry Godwin threw an interception in the end zone on a trick play. Auburn turned its next drive into the game’s first points. Maurice Smith snagged a 3rd‐and‐long pass on Auburn’s first drive of the third quarter and returned in 34 yards for a touchdown. Smith now has two interceptions in his one season with the Bulldogs. This was Georgia’s first pick returned for a score since Dominick Sanders took one back 88 yards at Vanderbilt last year. Georgia has forced 19 turnovers for 40 points while opponents have turned 14 Bulldog miscues into 59 points this season.

*Up Next: Georgia (6‐4 overall, 4‐4 SEC) plays host to the Ragin’ Cajuns of Louisiana Lafayette Saturday at Noon on the SEC Network.

On the win…
“That was more than team-wide, it was university-wide and fan-wide. The crowd noise at the end impacted the game. With less than two minutes, they could not convert and that was helped by the noise. These kids don’t have any quit in them. They fight.”

On Georgia’s fourth-quarter scoring drive…
“That was an identity drive. We challenged them to be physical. We were struggling to run the ball inside on that massive front, so we got the ball on the perimeter. We had some runs hit there.”

On Maurice Smith’s interception return for a touchdown…
“The touchdown got the crowd invigorated. When Mo hit the pick-six, it got electric. It fired the defense up and inspired the offense. We got a lot of energy from that.”

On Auburn’s running game…
“They are a run-first team and not having their big back was tough. He’s a great player. It’s tough that he wasn’t healthy, but they ran well with the others. Our kids struck and played hard tonight.”

On the first-quarter interception in the end zone…
“That play is on me. I wanted that play and I thought the play was there. I thought it could be a golden play.”

On Jacob Eason…
“He’s growing, he’s getting more confidence and he’s getting better with each game. He’s an intelligent kid. We need to keep putting him in situations to be successful. He’s competitive with a calm, cool demeanor.”

On Georgia’s defense…
“Those guys are amazing. We know those guys would hold them up and they did. They scored one touchdown on us, so we knew it was on us to make some plays, and we were able to do that.”

On pick-six in the second half…
“What was going through my head? Him getting into the end zone and me getting a block. It felt amazing.”

On the second-half…
“That was the adjustment we needed. They were hitting everything on the perimeter in the first half, so the halftime adjustment was stopping the run there and we stopped it, but I guess they continued to try to do it.

On his second-half pick-six…
“This makes it definitely worth while. It’s a blessing. For me to be a part of this team and be able to help the team, I just love it. I was relieved [after the touchdown]. I had been wanting to get one for the longest time and I ended up getting it and God blessed me and the defense did a great job blocking.”