Bulldogs to play in 2017 Wooden Legacy

Bulldogs to play in 2017 Wooden Legacy 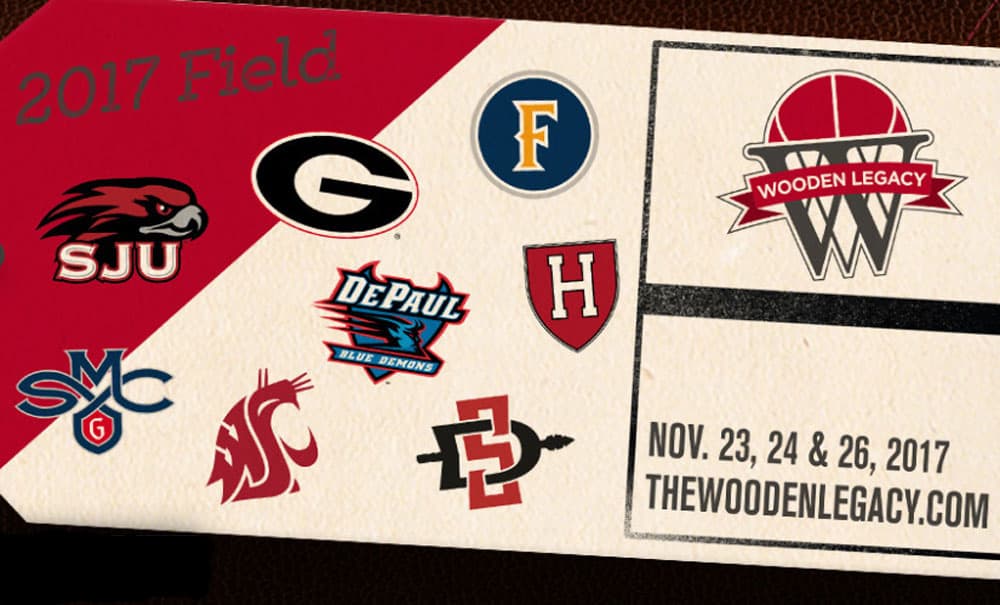 ATHENS, Ga. — The Georgia Bulldogs will spend next Thanksgiving in Los Angeles. The Bulldogs will take part in the 2017 Wooden Legacy next season, a 12-game bracketed in-season tournament. Next year’s event will be played on November 23, 24, and 26.

The appearance will be the Bulldogs’ third in a “Wooden” event and their first since 2002. Georgia played two thrilling games in their previous trips to Wooden Classic, losing to Stanford, 76-74, in 1997 and defeating Cal, 78-73 in overtime, in 2002.

The Wooden Legacy was formed in June 2013 as two vibrant, nationally-recognized in-season collegiate basketball events joined forces as the John R. Wooden Classic was merged with the Anaheim Classic that had been played the previous six years (2007-2012) at the Anaheim Convention Center.  The Wooden Classic was staged 19 years (1994-2012) at Honda Center with the first 17 events being college doubleheaders.

San Diego State, the 2013 Wooden Legacy champion from the Mountain West Conference, returns to participate in the eight-school event named for the legendary UCLA coach John Wooden. The Aztecs defeated College of Charleston, Creighton and Marquette enroute to winning the Wooden Legacy crown in their first appearance in the tournament.

Cal State Fullerton – When the school makes their third appearance in the Wooden Legacy, the Titan will be led by underclassmen forward Jackson Rowe and guard Kyle Allman.  Rowe has started his freshman campaign this season by averaging 13.3 points and 5.5 rebounds game while shooting 76 percent from the field.  After averaging 5.1 points per game as a freshman in 2015-2016, Allman has started his sophomore season by scoring 12.0 points a game with a 3.5 assist average.

DePaul – The Blue Demons return to Anaheim and will be led by sophomore guard Eli Cain. Cain opened his sophomore season with three straight 20-point games after earning BIG EAST All-Freshman Team honors in 2015-2016. Joining Cain will be a pair of sharpshooting transfers sitting out the 2016-2017 season in Austin Grandstaff and Max Strus. Grandstaff was a consensus top 50-recruit coming out of high school before playing his freshman season at Ohio State. Strus played his first two seasons at Lewis University (Ill.) where he earned Division II All-American honors.

Harvard – The Crimson will be led by sophomore Bryce Aiken, who paces a class that contributes 48.5 points per game thus far this season. Junior Chris Egi also returns as a key cog, averaging 3.7 points and 2.7 rebounds in 15 minutes this season.

Saint Joseph’s – The 2016 Atlantic 10 champions, the Hawks will feature the backcourt duo of senior Shavar Newkirk and junior Lamarr Kimble when it makes its first appearance in the Wooden Legacy in 2017-2018. Through the early part of 2016-2017, Newkirk and Kimble have combined to score more than 50 percent of the Hawks’ points. Newkirk looks to be on track for a career-best season, averaging 21.8 points per game.

Saint Mary’s – When Saint Mary’s competes in the 2017 Wooden Legacy, the Gaels will return all but two graduating seniors, Joe Rahon and Dane Pineau.  SMC will be led by current junior guard Emmett Naar who is averaging 11.3 points and 7.8 assists per game so far in 2016.  Coach Randy Bennett will also have starting center Jock Landale who is off to a hot start, as the 6-11 Australian is averaging 21.3 points and 9.5 rebounds per game.  Among the most efficient offenses in the country, the Gaels currently rank 2nd in the NCAA in Assist-Turnover ratio (2.39) and 11th in field-goal percentage (53.0%).  The No. 15 ranking is the highest the Gaels have been ranked by the AP since 1959.

San Diego State – The Aztecs will be led by its starting backcourt in Trey Kell and Jeremy Hemsley.  Kell, who will be senior in 2017-2018, is starting for the third straight season and is averaging 18.7 points through three games.  Hemsley, meanwhile, will be in his junior campaign and he currently leads the Aztecs in scoring at 20.7 points per outing.

Washington State – So far this season, freshman Malachi has started every game of his Cougar career at point guard, and looks to continue to lead WSU as a sophomore when the team heads to the 2017 Wooden Legacy. The 6-1 point guard is currently averaging 9.8 points, 4.6 rebounds and 2.1 assists per game. He will be joined by current sophomores, Viont’e Daniels and Robert Franks, who look to step up next season with the departure of four seniors, including forward Josh Hawkinson and guard Ike Iroegbu.