No. 11 Tennessee's Hail Mary pass lifts Vols over No. 20 Georgia

No. 11 Tennessee’s Hail Mary pass lifts Vols over No. 20 Georgia 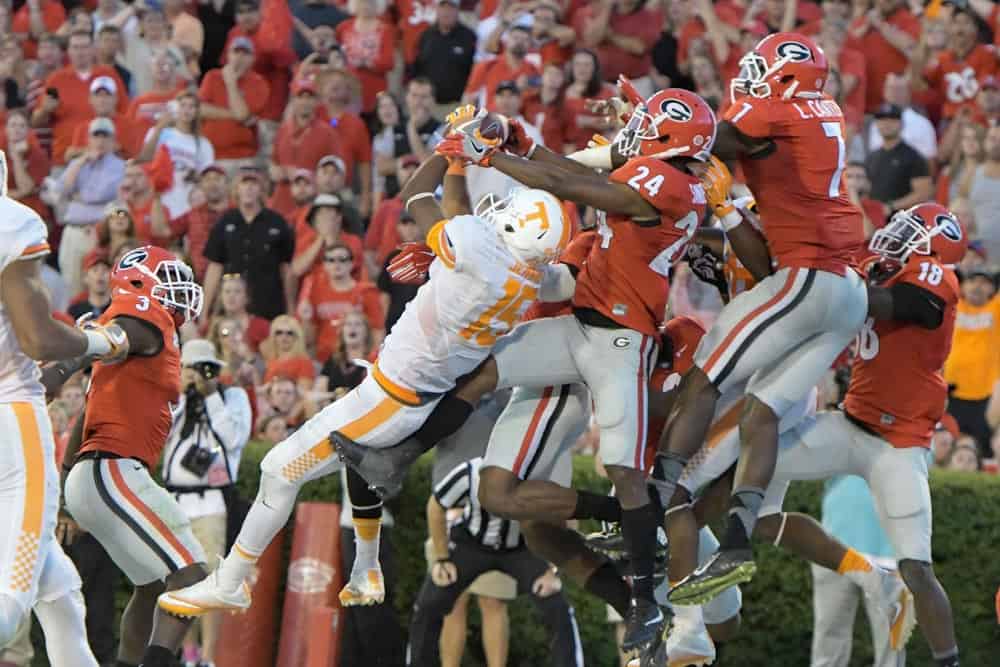 Joshua Dobbs launched a 43-yard throw toward the endzone with Jauan Jennings hauling it in for the game winner as time expired. In the previous drive, Georgia used its own come-from-behind touchdown with Jacob Eason hurling a 47-yarder toward Riley Ridley, giving the Bulldogs a 31-28 advantage with 10 seconds left in the contest.

After holding the lead for a majority of the game, a late fumble by Georgia in its endzone allowed Tennessee to recover and score for its first lead at 28-24 with less than three minutes left in the contest. Starting at the Georgia 4-yard line, Eason was hit and lost the ball with Tennessee’s Corey Vereen recovering for the touchdown.

Eason completed 17-of-28 passes for 211 yards, targeting Isaac Nauta with five of those throws for 83 yards. Sony Michel led the rushing corps with 91 yards on 16 carries with a touchdown while Brian Herrien followed with 15 carries for 74 yards.

Ahead 10-0 early in the second, the advantage increased with two fumbles going the right way for Georgia. What looked to be a touchdown with a pass from Dobbs to Jalen Hurd turned into a touchback for the Bulldogs, as Deandre Baker forced a fumble right ahead of the goal line for Aaron Davis to recover.

On the ensuing Bulldog drive, Georgia worked its way to the Tennessee 2-yard line where Michel took the handoff. However, Vol Colton Jumper knocked the ball out for a trailing Eason to recover for his first career touchdown. Tennessee would score a touchdown in the final two minutes of the half for a 17-7 score.

It was a 24-14 game after three quarters, as Tennessee put up two touchdowns in the third while Georgia added one after Nauta recorded his first career score with a 50-yard pass from Eason. Tennessee closed the gap in the fourth with a six-play, 51-yard scoring drive before the final three minutes of back-and-forth gave way to the Tennessee win.

The Bulldogs hit the road next weekend for a bout at South Carolina. The 7:30 p.m. ET contest will air on SEC Network.

*Points Off Turnovers: Georgia scored 10 points off three Tennessee turnovers while the Vols scored 7 points off two Bulldog miscues. Coming into the game, the Bulldogs had scored just 13 points off nine turnovers this season. Senior STAR Maurice Smith stripped Alvin Kamara and recovered it late in the first quarter. This was Tennessee’s first play following Georgia’s opening touchdown of the day. The Bulldogs converted this turnover into a field goal, their fourth of the year. First‐time starter Deandre Baker blasted Jalen Hurd as he caught what would have been a 24‐yard touchdown at the goal line. Hurd fumbled and DB Aaron Davis recovered it for a touchback. Georgia turned this miscue into seven points. Smith returned in the fourth quarter to pick off Josh Dobbs. The Bulldogs went three‐and‐out on their next possession. UT forced a fumble in the endzone and Cory Vereen recovered it for a TD with 2:56 left for the Vols first lead at 28‐24. The Bulldogs now are currently +3 in turnover ratio. Georgia has forced 12 turnovers for 23 points and opponent have scored 38 points off eight Bulldog miscues.

*Career Day For Nauta: In the passing attack, freshman TE Isaac Nauta had a career day with five catches for 83 yards. He hauled his first career touchdown catch on a career‐long 50‐yard strike from freshman QB Jacob Eason. Nauta came into the game with four catches for 32 yards. Eason finished 17‐for‐28 for 211 yards, two touchdowns and one interception. Eason fired a 47‐yard TD strike to freshman Riley Ridley with 10 seconds left to give the Bulldogs a short‐lived lead. Riley finished with two catches for 59 yards.

*First Time: Freshman receiver Riley Ridley’s first career catch was a 10‐yard reception in the opening quarter and then snagged a 47‐yarder for his first career TD with 10 seconds left to give Georgia a lead. Michel finished the drive with a 14‐yard touchdown, his first of the year. This capped a 10‐play, 79‐yard drive that lasted 5:32. During the drive, Georgia racked up 52 yards on the ground. Redshirt freshman PK Rodrigo Blankenship also connected on his first career field goal. He drilled a 27 yarder to put Georgia up 10‐0 at the 11:21 mark in the second period. Blankenship is 1‐2 on the year. The Bulldogs went up 17‐0 after freshman QB Jacob Eason jumped on Michel’s fumble as he crossed the finish line. This was Eason’s first touchdown on the ground. This also marked Georgia’s first recovered fumble for a score since Lorenzo Carter pounced on one against Nicholls earlier this season.

*Rushing Attack: Junior TB Sony Michel finished with 91 yards on 16 carries after posting 72 yards and a touchdown in the opening half. Freshman TB Brian Herrien carried the ball 15 times for 74 yards. The Bulldogs totaled 392 yards, including 181 on the ground. Junior Nick Chubb, who missed the second half of the Ole Miss game last week due to an ankle injury, saw action on only one play today and had a 3‐yard rush.

*Tackles: Sophomore ILB Natrez Patrick finished with a career‐high 10 tackles, including his second career sack and 2.5 tackles for loss. Meanwhile Maurice Smith, who forced and recovered a fumble, also recorded a career‐high seven stops and had an interception.

*Go For It: The Bulldogs are now 4‐for‐6 on fourth downs this season after successfully converting one in the 2nd quarter. Michel shot through the middle of the line for three yards on a 4th‐and‐1 situation to the UT 25. Georgia failed to convert a 4th‐and‐2 with 9:02 left in the game at UT 25.

*For Starters: Sophomore DB Deandre Baker and freshman DL Julian Rochester started their first career games for the Bulldogs. They are the 10th and 11th first‐time starters this season.

On the Eason-Ridley touchdown pass …
“(Eason) extended the play and threw a laser in there. That was a big play and we caught it. The sad thing is we had an undisciplined penalty and that will bite you when you least expect it. We pride ourselves on being disciplined. They should know that. You hate to learn a lesson like that. It’s disappointing.”

On Eason bouncing back after the turnover that resulted in a Tennessee touchdown …
“That’s the kind of kid he is. He’s levelheaded and composed, and that’s good for a quarterback. He stepped up and made some good plays. He needs to play with consistency. He can’t be affected by good plays or bad plays.”

On the last play of the game …
“That’s something we practice every week – last-play defense. You put your best jumpers in the end zone and everybody gets up and gets the ball down. We do drills to rep it. Their kid just went up and got it.”

On Coach Smart’s message…
“[Coach Kirby Smart] told us to stick together as a team, which we are always going to do. We are going to keep fighting and we have some learning to do. We’ll go to practice, practice hard and get prepared for our next opponent.”

On Eason and Ridley…
“Those guys fought hard the entire game. They made mistakes but capitalized and stay poised and kept fighting for our team.”

On moving on…
“It should linger. We have that 24-hour rule; whether we win the game or lose the game, we have 24 hours, then we move on. We have another SEC opponent next week, which is a big game for us. Within these 24 hours, you have to move on.”

On tough plays in his career…
“I’ve never been a part of something like that. We won the game, then next thing you know, we lost the game. It’s heartbreaking. I’m wishing we could have won but they had a good play on offense and our defense didn’t make the play. That’s just how it goes. Kudos to them on making that good play.”

On running success…
“We had to size that during the week. We needed to be able to run the ball better, we practiced hard and we worked on it and I think that showed out there today.”

On the heartbreaking loss…
“There’s just so much emotion involved. You’re in it until the last play. Once that ball comes down, you’re hoping that the people did their job and knocked it down but for it just to fall into somebody’s hands and you see their team running on the field, it’s just heartbreak.”

On the final play…
“I wasn’t able to see how [Jennings] caught it. I just do my job and we expect everyone to do their job, but we’ll clean it up.”