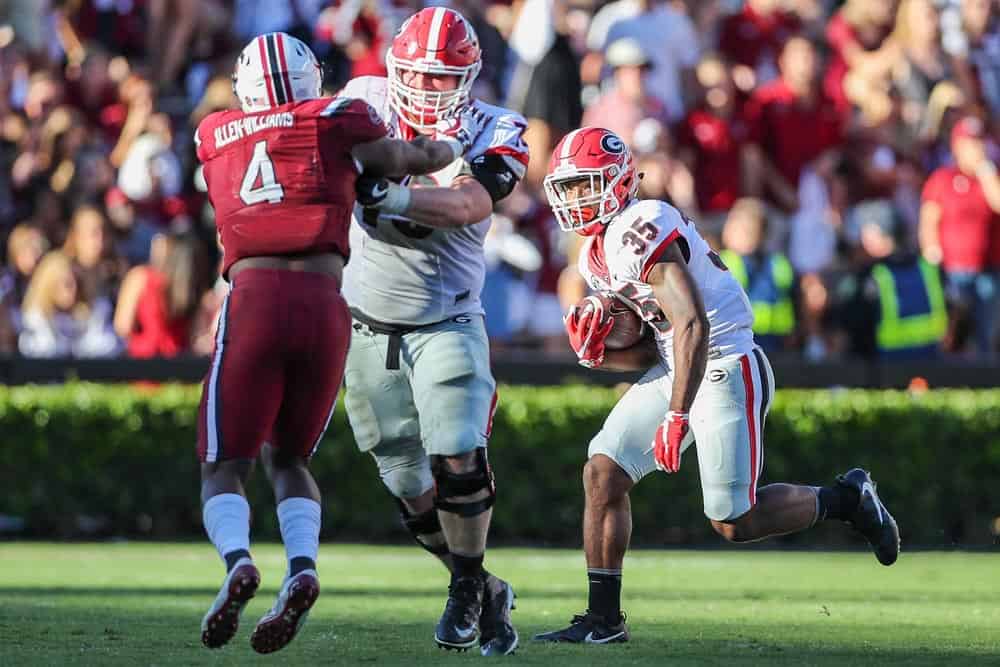 COLUMBIA, S.C. – Georgia’s running back rotation truly showed their talent against South Carolina, picking up right where they left off a week ago against Tennessee and leading their team to a 28-14 victory.

Georgia’s trio of Nick Chubb, Sony Michel and Brian Herrien amassed a total of 316 yards on the ground. Chubb and Michel both totaled over 100 yards, with Herrien falling just behind as he maintains his stellar play as a freshman.

The running game all starts up front with the offensive line, and after struggling in three of Georgia’s first five games, it seems as if the run blockers up front have been able to open up holes for the Bulldogs’ talented backs to rack up some yards.

Senior tackle Greg Pyke spoke boldly on the performance by his group, indicating the Bulldogs overmatched the opposing front-seven.

“We enforced our will on them,” Pyke said. “We had good double-teams across the board. But that means we’ll watch the film and probably find some mistakes out there, too.”

Mainly all of Georgia’s production came on the ground during Sunday’s win as freshman quarterback Jacob Eason struggled on the afternoon, with only five completions and 29 yards. As a result, it was all placed on the shoulders of the Bulldogs’ backfield and they had an answer.

Nick Chubb commented on his day, racking up 124 yards. He and his teammates seemed pleased with the fact that Georgia was able to get back to their main offensive style, pounding the rock.

“It’s a mindset, to come out here and get physical,” Chubb said. “We got the big boys up there rolling. It was working for us, opening up for us.”

Head coach Kirby Smart has stressed the importance of opening up the run game, and it took quite a while for the improvements to show up in-game.

This time around, what the coaching staff stresses on the practice field finally showed up when it mattered. Smart was pleased, to say the least.

“Those backs are special, and they make you good coaches,” Smart said.

On the opposing end for South Carolina, they had no answer for the Bulldogs’ rushing attack and the Gamecocks found themselves in trouble quite quickly.

By the running backs, Georgia had the advantage with a differential of 247 yards on the ground. Senior linebacker T.J. Holloman displayed frustration in the big variation in rushing totals, and while knowing what Georgia’s plan would be, the inability to be impactful cost South Carolina a victory against their SEC East rival.

“It’s very challenging, but as a defense we talked a lot this week about embracing and for the most part we did,” Holloman said. “But the plays we needed to make, we didn’t make them all. So now we just need to come back next week on our bye week and focus on the techniques we have.”