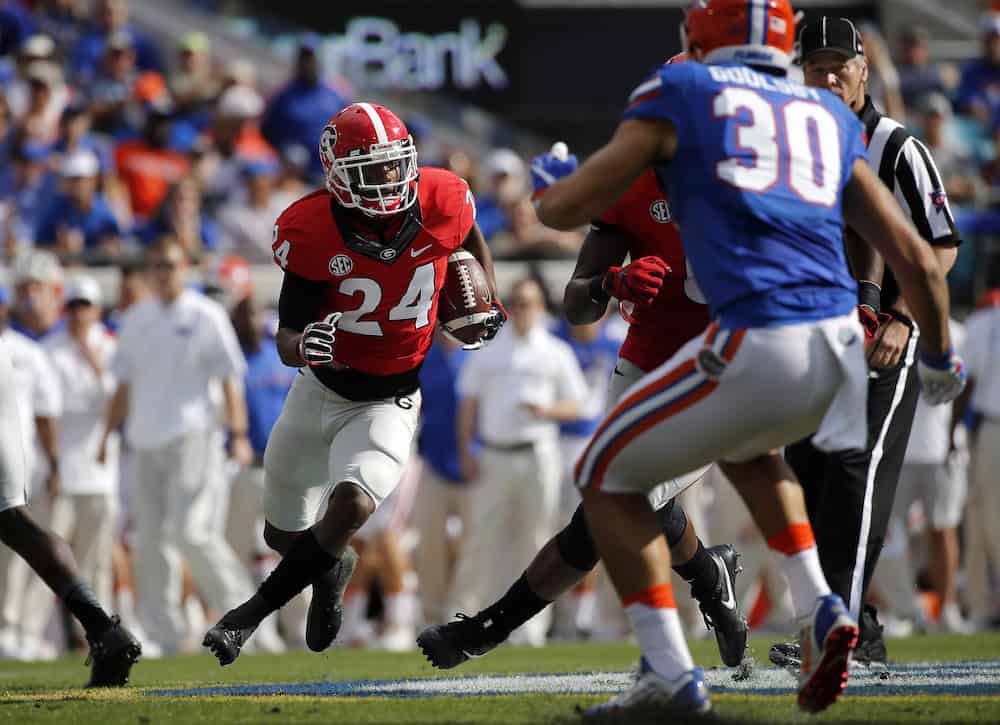 Georgia has been able to piece together a manageable performance throughout the first thirty minutes against their rival Florida. The Bulldogs haven’t played a perfect game, and mistakes have given Florida a 14-10 lead.

Head coach Kirby Smart is one half away from claiming his fifth victory in the season, and the first in this all-important series. As the stretch run nears and Smart will have to make yet another comeback, here are three observations to this point in the game.

Florida’s secondary is highly-regarded, with Quincy Wilson, Marcus Maye and Teez Tabor all destined for an NFL career. Therefore, Georgia freshman quarterback Jacob Eason has had to find ways to find his receivers and he’s been successful to this point.

The freshman has been able to scramble a bit, outside of his mold of being a pro-style quarterback. His shown athleticism led to a deep pass to Terry Godwin as well as a touchdown throw to Riley Ridley. With the running game being stymied, with only seven yards at halftime, Eason’s efforts have been able to keep Georgia in the game.

Another day and more concerns for Georgia’s special teams unit as short punts and poor coverage have given Florida good field position.

Florida’s average field position has been on their own 40-yard line, and have scored twice as a result. Freshman punter Marshall Long has averaged 32 yards on three punts to this point, including a 20-yard boot which led to a Gators’ score.

Due to Long’s subpar efforts, junior Brice Ramsey took over the punting duties. Ramsey’s boot wasn’t much of an improvement, only a 36 -yard kick.

Georgia’s junior safety Dominick Sanders has been the team’s defensive leader this season, and he rebounded after making a blunder early in the game.

Sanders was penalized with a facemask, and put the Gators in a more favorable position to score on their opening drive. However, Sanders came down with an interception just a play later, due to a misread by Gators’ signal caller Luke Del Rio.

The junior defensive back returned the interception 31 yards, leading to Georgia’s first points of the day.

Defensive coordinator Mel Tucker will be in search of more crucial plays from Sanders if Georgia hopes to make another comeback, this time in one of the season’s most important rivalry games.