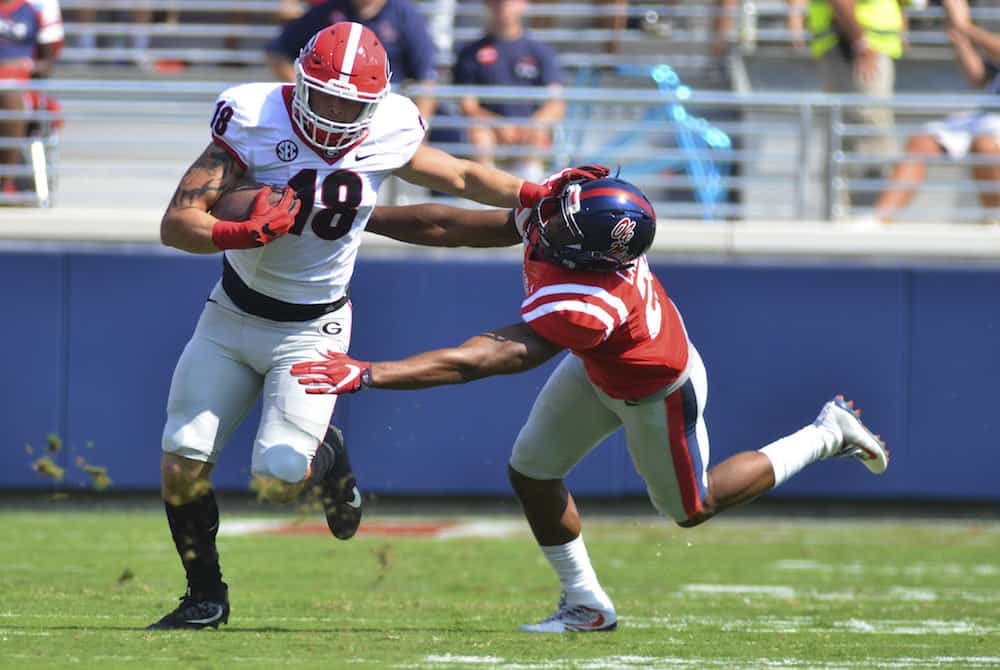 Georgia arrived in Oxford with plenty of hope and an opportunity to claim a road win against a quality opponent. Thirty minutes into the action, it looks as if that hope has diminished.

The Bulldogs trail Mississippi by a whopping 31-0 tally, and Georgia’s offense has been stagnant, but miscues have led to numerous missed opportunities. As Georgia hopes to make a comeback for the third time this season, here are three observations from the first half as Kirby Smart’s team must make plenty of improvement.

Smart has voiced his concerns with Ole Miss’ offensive style and the numerous playmakers around quarterback Chad Kelly, and those concerns have been validated to this point.

Georgia has failed to get significant pressure on Kelly, and the secondary has paid for it. The Rebels have been able to concern on multiple deep shots, including a 55-yard strike to DaMarkus Lodge. As a result, Georgia finds themselves in a hole that seems nearly impossible to escape of 31 points.

Georgia decided to replace William Ham with Rodrigo Blankenship for their first field goal attempt against Ole Miss, hoping for better luck. However, it was the same story yet again.

The Bulldogs were trailing 17-0, and finally had some offensive momentum with the opportunity to put points on the board. It wasn’t the case as Blankenship was unable to convert on a fairly easy opportunity of 36 yards. Georgia will need to try and avoid field goal attempts in order to give themselves a chance of a comeback, as the lack of confidence within Georgia’s group of kickers is slim. Therefore, the difficulties of putting the ball through the uprights may continue.

Last weekend, freshman quarterback Jacob Eason threw for 308 yards and three touchdowns, going 29-55. The case isn’t the same against Ole Miss however, as Eason has been unable to connect with his wideouts.

While many drops by Terry Godwin, Isaiah McKenzie and Jayson Stanley have played a factor, Eason has made poor decisions to this point, leading to only 64 yards and an interception, with only 7 completions throughout the first half. The Bulldogs have left plenty of points on the board, and the overthrown passes by Eason and the drops by Georgia’s playmakers are some of the sole reasons why.