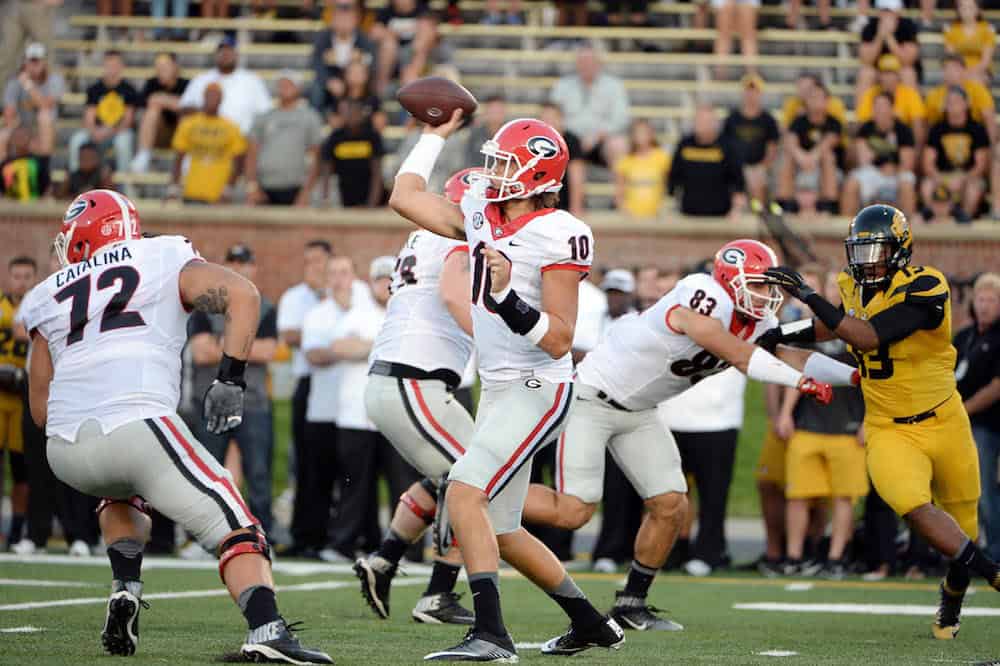 Georgia looked as if they were stunned out of the gates, but after making adjustments the Bulldogs lead Missouri 21-20 at halftime.

As the Bulldogs have thirty minutes to go until they claim a victory in their first road test of the season, five things stand out, some good and some bad for Georgia head coach Kirby Smart.

Smart indicated during preparation for the Missouri game that Tigers sophomore quarterback Drew Lock was one of his primary concerns, and the signal caller for Josh Heupel’s offense showed why as the Bulldogs defense was picked apart off of the bat. Missouri took a 7-0 lead just 2:07 into the game, and Georgia was forced to adjust.

While Georgia has adjusted since then, Lock has still been able to connect on intermediate and deep routes, including a 79-yard touchdown strike to J’Mon Moore, who was covered yet again by Bulldogs cornerback Juwan Briscoe who was beat on a pass for the fourth time in the first half. Lock has amassed 322 yards on 19 completions and has found the end zone twice.

If Georgia looks to win its conference opener, the secondary will have to continue to make adjustments and contain the Tigers’ passing attack. Smart has channeled his inner defensive coordinator, and has tried to coach his group up after Missouri’s latest deep strike.

Georgia may not have won their first two games if the quarterbacks couldn’t depend on junior wide receiver Isaiah McKenzie, and the Bulldogs may be trailing against the Tigers if the electrifying playmaker wasn’t the centerpiece yet again.

McKenzie has been apart of Georgia’s offensive attack in every facet, whether it be pass receptions or sweep hand-offs. McKenzie has 96 receiving yards on seven receptions and a touchdown through thirty minutes of action. His success has set up Georgia’s two trips to the end zone, particularly being beneficial on third downs.

Greyson Lambert may have now officially taken a backseat to the freshman fan-favorite Jacob Eason. Both his intermediate and deep passes have been mainly crisp in his first half of conference action.

Eason has been able to find his receivers, well McKenzie for the most part, and has found plenty of success. He has tallied 219 yards on 18 completions, and found the end zone twice, once to McKenzie and fullback Christian Payne. Despite having a freshman communication blunder with Charlie Woerner in which resulted in an intentional grounding penalty, he has displayed both improvement and potential.

Georgia has had more trust in Eason and his arm, and while the use of the deep pass may be too frequent, the freshman has shaken off some of his inexperienced mistakes.

Smart credited him in his halftime television interview.

“He’s doing a good job and has managed the crowd well,” Smart said.

The expectation was that Georgia’s offensive line would show improvement after their putrid showing the week prior, and that hasn’t been the case in terms of run blocking.

Georgia’s leading running back Nick Chubb only has gained 34 yards on 12 carries, having a similar result to his 80 yard total on 20 carries last Saturday against Nicholls State. The rest of Georgia’s stable of running backs haven’t found much success either as Sony Michel has only nine yards.

Needless to say, Georgia’s run blocking will need to improve and holes will need to be created for the Bulldogs backfield talent in order for them to build upon their narrow lead.

Smart credited his fullback Christian Payne for his key blocks against North Carolina in the season opener, and now offensive coordinator Jim Chaney is utilizing the “Payne Train” in the passing game.

Payne is just behind McKenzie in receiving yards as he has surprisingly gathered 34 yards and a touchdown on four receptions. While the defense has a focus on McKenzie and Terry Godwin, it is clever for Chaney to utilize the fullback on some underneath passes both to fool the defense and allow Eason to have some easy dump-off passes.